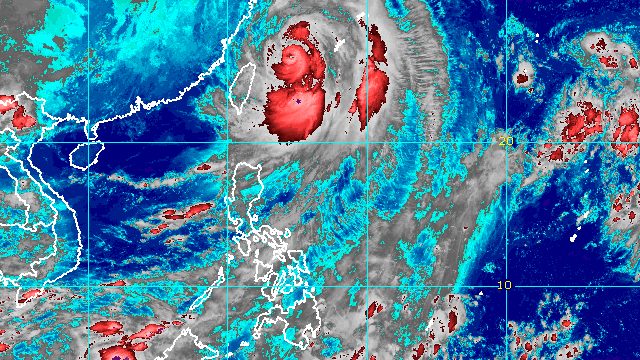 HENRY. Satellite image of Typhoon Henry (Hinnamnor) outside the Philippine Area of Responsibility as of September 4, 2022, 5:30 am.

Facebook Twitter Copy URL
Copied
Parts of Luzon continue to see rain from the enhanced southwest monsoon on Sunday, September 4, even after the exit of Typhoon Henry (Hinnamnor)

The Philippine Atmospheric, Geophysical, and Astronomical Services Administration (PAGASA) said in its 5 am bulletin on Sunday that Henry was already 590 kilometers north northeast of Itbayat, Batanes, over the East China Sea and outside PAR.

The typhoon is moving north northwest at 15 kilometers per hour (km/h), heading for South Korea where it could make landfall on Tuesday, September 6.

Henry maintained its strength as it left PAR, with maximum sustained winds of 150 km/h and gustiness of up to 185 km/h.

It did not make landfall in the Philippines, but affected the country’s northernmost provinces due to its size.

With Henry’s exit, tropical cyclone wind signals have been lifted. The highest wind signal previously raised was Signal No. 2.

But the typhoon is still enhancing the southwest monsoon. PAGASA said the following areas will have scattered rain showers and thunderstorms on Sunday:

Flash floods and landslides are possible during periods of moderate to heavy rain.

The Davao Region and Soccsksargen will have similar weather conditions, but due to the intertropical convergence zone.

In terms of winds, PAGASA said “the enhanced southwest monsoon, its convergence with the typhoon circulation, and the channeling of winds within the Luzon Strait will continue bringing strong winds” to Batanes and Babuyan Islands on Sunday.

Occasional gusts due to the enhanced southwest monsoon may also be felt in these areas:

Meanwhile, a gale warning was still issued at 5 am on Sunday due to Henry, covering these seaboards: