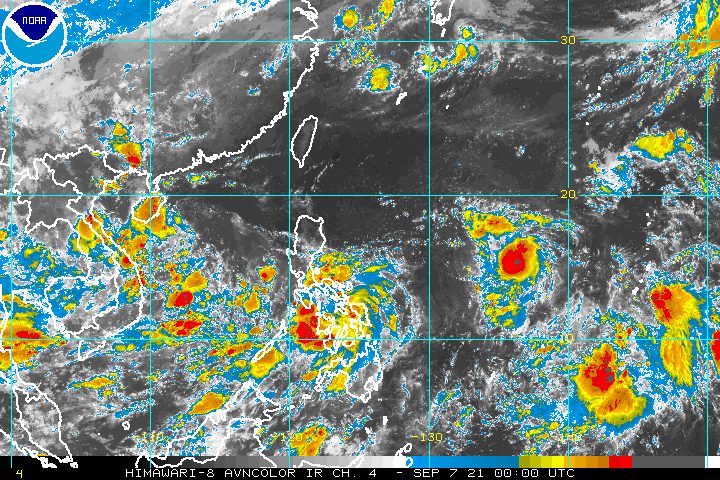 JOLINA. Satellite image of Typhoon Jolina (Conson) as of September 7, 2021, 8 am. There is also a tropical depression outside the Philippine Area of Responsibility.

Typhoon Jolina (Conson) made its fourth landfall in Almagro, Samar, at 6:30 am on Tuesday, September 7, and proceeded to move toward Masbate.

The typhoon’s landfalls, so far, have been in the following areas:

In a bulletin released past 8 am on Tuesday, the Philippine Atmospheric, Geophysical, and Astronomical Services Administration (PAGASA) said Jolina was already over the coastal waters of Almagro, or over the Samar Sea.

The typhoon slightly slowed down, moving west northwest at 15 kilometers per hour from the previous 20 km/h.

It continues to have maximum sustained winds of 120 km/h, while its gustiness is up to 150 km/h.

While Signal No. 1 has been lifted in a few areas, some places like Metro Manila and Cavite have been added to the list as of 8 am on Tuesday.

Jolina will continue to trigger rain on Tuesday, mainly in Eastern Visayas, Bicol, and Mimaropa. Affected areas were advised to stay on alert for scattered to widespread floods and landslides.

PAGASA also said early Tuesday morning that in the next 24 hours, storm surges 0.5 to 1 meter high may hit coastal areas in these provinces:

Storm surges would “pose a threat to life and property,” warned the state weather bureau.

“In addition, coastal areas of localities under [tropical cyclone wind signals], especially those at No. 2 and No. 3, may experience coastal flooding due to hazardous surf conditions,” PAGASA said.

Jolina’s fifth landfall could be in Masbate, either in the mainland or in Ticao Island, also on Tuesday.

After that, the typhoon could head northwest toward Burias Island and the Ragay Gulf, then make another landfall in the southeastern part of Quezon on Tuesday evening or early Wednesday morning, September 8. As it crosses land, it may also weaken into a severe tropical storm.

By Wednesday afternoon, Jolina could emerge over Lopez Bay, then make yet another landfall in the northern part of Quezon.

It will cross Central Luzon for the rest of Wednesday until Thursday morning, September 9, which would be to the east and north of Metro Manila. During this time, it may weaken into a tropical storm.

Aside from Jolina, another tropical cyclone is expected to enter PAR on Wednesday morning, to be given the local name Kiko.

It was still a tropical depression before dawn on Tuesday, but it may intensify before entering PAR.

It was last spotted 1,685 kilometers east of Central Luzon.

PAGASA said the chances of landfall are slim, but a tropical cyclone wind signal may be raised for Batanes if the potential Kiko goes near the province. (READ: FAST FACTS: Tropical cyclones, rainfall advisories)

Jolina is the Philippines’ 10th tropical cyclone for 2021 and the first for September. Kiko would be the 11th for the year.