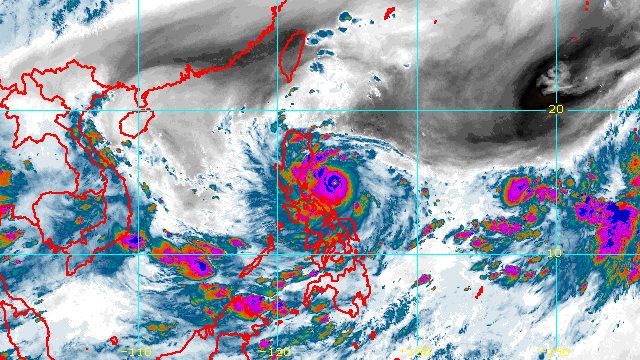 Facebook Twitter Copy URL
Copied
Typhoon Karding (Noru) already has maximum sustained winds of 155 km/h and it is expected to keep intensifying before it makes landfall on Sunday, September 25

MANILA, Philippines – With Typhoon Karding (Noru) still rapidly intensifying, the weather bureau warned that the possibility of it making landfall as a super typhoon is now “increasingly likely.”

In its 5 am bulletin on Sunday, September 25, the Philippine Atmospheric, Geophysical, and Astronomical Services Administration (PAGASA) said Karding’s maximum sustained winds further increased to 155 kilometers per hour, from 140 km/h just three hours earlier. Its gustiness is now up to 190 km/h from 170 km/h.

Under PAGASA’s classification, updated back in March, a super typhoon has maximum sustained winds of 185 km/h or above.

Karding was last spotted 285 kilometers east of Infanta, Quezon, moving west southwest at 25 km/h. It gradually accelerated in the early hours of Sunday.

It is expected to make landfall in the northern part of Quezon or the southern part of Aurora on Sunday evening. But PAGASA also said it is not ruling out the possibility of the typhoon making landfall in Quezon’s Polillo Islands in the afternoon.

After hitting land, Karding will cross Central Luzon for the rest of Sunday evening until early Monday morning, September 26, then emerge over the West Philippine Sea via Zambales or Pangasinan. It could weaken during this period, but it is highly likely to remain a typhoon, PAGASA said.

Here is the weather bureau’s latest rainfall forecast for Karding:

PAGASA emphasized that scattered to widespread floods and landslides are possible.

Karding is also enhancing the southwest monsoon or hanging habagat, which may bring rain to the Visayas and the rest of Southern Luzon, especially their western sections.

In terms of winds, these are the areas under tropical cyclone wind signals as of 5 am on Sunday:

PAGASA expects to raise Signal No. 4 in its next bulletin at 8 am.

If Karding becomes a super typhoon, Signal No. 5 would be the highest possible wind signal.

Meanwhile, PAGASA issued a new gale warning at 5 am, covering the following seaboards:

Karding and the enhanced southwest monsoon will also cause moderate to rough seas in the northern and western seaboards of Luzon that are not under any gale warning, with waves 1.5 to 3.5 meters high, and in the western seaboard of Visayas, where waves will be 1.2 to 2.5 meters high. These conditions may be risky for small vessels.

The weather bureau also warned that the combined effects of storm surges and high waves breaking along the coast may cause flooding in the moderate- to high-risk coastal areas of the following provinces: