Signal No. 4 up due to stronger Typhoon Odette 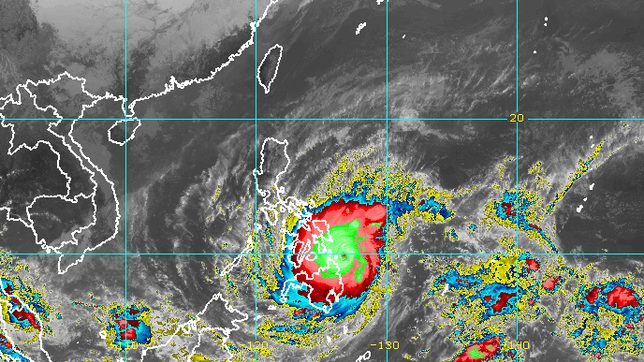 MANILA, Philippines – Parts of Mindanao and the Visayas were placed under Signal No. 4 late Thursday morning, December 16, as Typhoon Odette (Rai) intensified further ahead of its expected landfall in the Caraga region.

Odette now has maximum sustained winds of 185 kilometers per hour from the previous 165 km/h, while its gustiness increased to 230 km/h from the previous 205 km/h, the Philippine Atmospheric, Geophysical, and Astronomical Services Administration (PAGASA) said in a bulletin released past 11 am.

The typhoon’s intensification will continue until it makes landfall on Thursday afternoon, and it could reach a peak intensity of 195 km/h.

PAGASA warned that Odette is endangering the Bucas Grande-Siargao Islands area and Dinagat Islands – the possible areas where the typhoon could make its initial landfall between 1 pm and 3 pm on Thursday.

Here are the areas covered by tropical cyclone wind signals as of 11 am:

Meanwhile, rain from Odette is torrential in areas directly in or near the typhoon’s path. PAGASA stressed that scattered to widespread floods and landslides could occur in the affected provinces and regions.

After its first landfall on Thursday, Odette is seen to cross several provinces in Central Visayas and Western Visayas before emerging over the Sulu Sea on Friday morning, December 17.

By that time, it would already be outside the Philippine Area of Responsibility. Odette could exit PAR by Saturday afternoon.