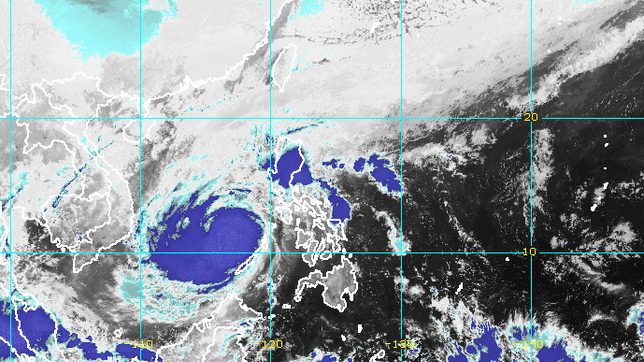 MANILA, Philippines – Typhoon Odette (Rai) was threatening the Kalayaan Island Group in the West Philippine Sea in the early hours of Saturday, December 18, after making landfall in the country nine times.

In its 5 am bulletin on Saturday, the Philippine Atmospheric, Geophysical, and Astronomical Services Administration (PAGASA) said Odette was located 240 kilometers west northwest of Puerto Princesa City, Palawan, moving west northwest at only 15 kilometers per hour (km/h).

The typhoon is expected to pass in the vicinity of the Kalayaan Island Group, which is part of Palawan, on Saturday, and exit the Philippine Area of Responsibility (PAR) either in the morning or afternoon.

PAGASA said Odette could slightly reintensify over the West Philippine Sea on Saturday, but the “increasing vertical wind shear and the surge of the northeast monsoon” or hanging amihan may cause it to weaken beginning Sunday, December 19.

The weather bureau advised residents in parts of Luzon as well as Northern Samar to expect more rain on Saturday even as Odette is on its way out of PAR. Floods and landslides could still occur.

Tropical cyclone wind signals are still raised for parts of Palawan as of 5 am on Saturday.

Signal No. 4 was the highest tropical cyclone wind signal raised during Odette’s onslaught.

PAGASA also warned of possible storm surges “which may result in life-threatening coastal flooding” in the Kalayaan Island Group, while coastal areas of localities under Signal Nos. 1 and 2 could see coastal flooding as well due to “hazardous surf conditions.”

Rough to very high seas are being experienced in the seaboards of the Kalayaan Island Group on Saturday. Waves are 2.8 to 10 meters high.

Rough to very rough seas also persist in the seaboards of areas under Signal Nos. 1 and 2, with waves 2.8 to 5 meters high.

“These conditions are risky for all types of sea vessels. Mariners are advised to remain in port or take shelter in port until winds and waves subside,” the weather bureau said.

In addition, a gale warning remains in effect due to Odette and the northeast monsoon. This gale warning covers coastal waters not under any wind signal in the seaboards of Northern Luzon and in the eastern and western seaboards of Central Luzon and Southern Luzon. Waters are rough to very rough, with waves 2.8 to 4.5 meters high.

The remaining seaboards of the Philippines not under any wind signal or gale warning – specifically the seaboards of the Visayas and the northern, western, and eastern seaboards of Mindanao – also have moderate to rough seas. Waves are 1.2 to 4 meters high and conditions are risky for small vessels.

Odette made landfall in the country nine times, in these areas:

The National Disaster Risk Reduction and Management Council said at least 14 people died due to Odette, based on initial reports. The typhoon also left a trail of destruction in parts of Mindanao and the Visayas, with damage assessment still ongoing.