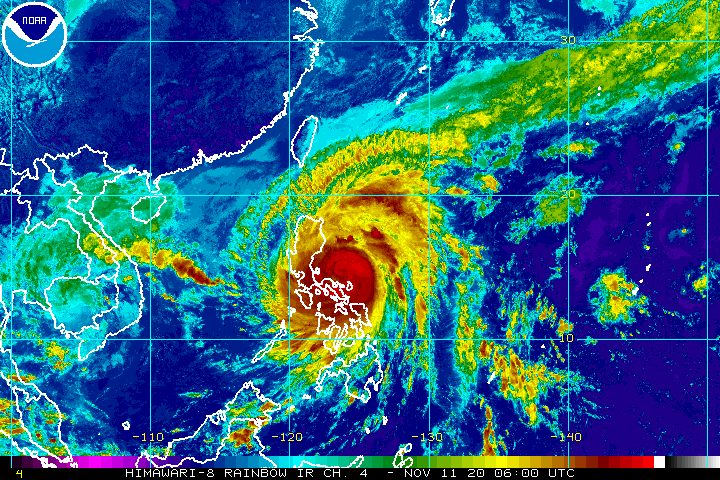 Typhoon Ulysses (Vamco) continued to intensify early Wednesday afternoon, November 11, as it moved closer to the provinces of Quezon and Aurora.

The Philippine Atmospheric, Geophysical, and Astronomical Services Administration (PAGASA) said in a bulletin released past 2 pm that Ulysses is now 125 kilometers north northwest of Virac, Catanduanes, or 95 kilometers northeast of Daet, Camarines Norte.

The typhoon maintained its speed, moving west at 20 kilometers per hour (km/h).

“Destructive winds and intense with at times torrential rainfall associated with the region of the eyewall and inner rainbands of the typhoon will be experienced over the northern portions of Catanduanes, Camarines Sur, and Camarines Norte until tonight (Wednesday evening) and over Aurora and [the] northern portion of Quezon tonight through tomorrow early morning (early Thursday morning),” PAGASA warned.

These are the areas under tropical cyclone wind signals as of 2 pm on Wednesday.

In terms of rainfall, PAGASA maintained the following outlook, warning that the rain could cause floods, landslides, and lahar flows.

After passing by waters near Catanduanes, Ulysses will pass over the seas north of Camarines Sur and Camarines Norte between Wednesday afternoon and evening.

Then the typhoon is projected to make landfall in Polillo Island and mainland Quezon between Wednesday evening and early Thursday morning, November 12.

After making landfall, it will cross Central Luzon and emerge over the western seaboard of Zambales on Thursday morning.