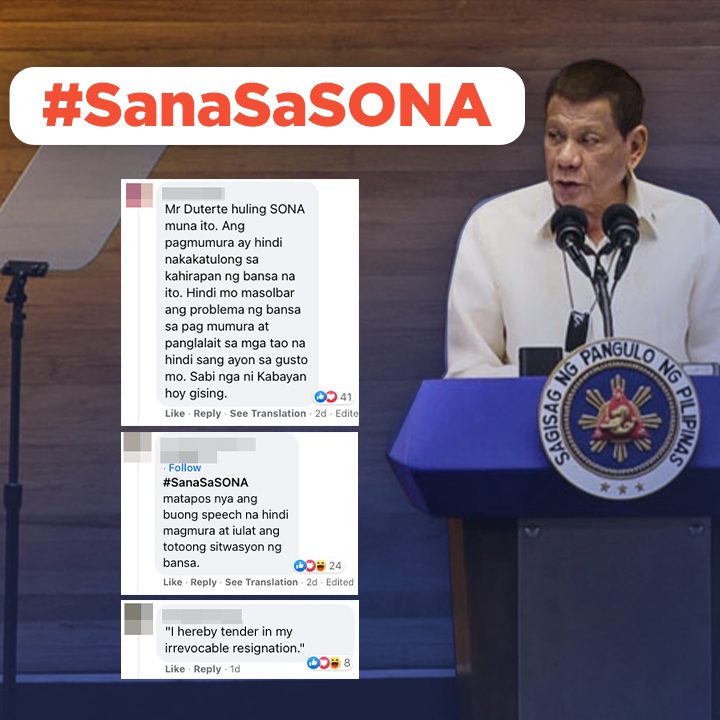 After five years of an administration marred by a bloody drug war, human rights abuses, and later a mismanaged pandemic response, Filipinos believe it’s about time for President Rodrigo Duterte to own up to his failures and mistakes.

As the nation awaits the President’s final State of the Nation Address on Monday, July 26, several Filipinos online shared their expectations – and what seemed to be sheer wishful thinking – on what Duterte should and should not say in last SONA.

Netizens said Duterte should apologize and own up to his failures as head of state, citing the controversies that would define his administration – his controversial campaign against illegal drugs, failure to bolster the Philippines’ position in the West Philippine Sea despite its historic win against China before an international arbitral tribunal, and the COVID-19 pandemic that has led to tens of thousands of deaths and has left millions jobless.

Not few agreed that Filipinos have gone through a great deal of suffering during Duterte’s watch.

Having built his brand as a strongman who revels in peppering his public speeches – his SONAs, included – with profanity, there are also those who are hoping that Duterte would again do away with obscene language, just as he had managed to do in 2016 and 2018.

Emerson Masindo said he did not want to hear narratives that would require “further interpretation” by Presidential Spokesperson Harry Roque, whose de facto job had been to defend Duterte’s callous claims and even outright lies as jokes that were only “taken out of context.”

For some, however, it was not a question of what they would want to hear in the SONA, but rather of whether or not the SONA would be the last they hear from Duterte, who had expressed interest in seeking the vice presidency despite constitutional questions raised by legal experts.

Step down from office and retire from politics, they urged him.

As the country grapples with the pandemic, a problem that would go on beyond Duterte’s presidency, others remained hopeful that they would finally hear concrete solutions from the President, the response that they had long demanded after enduring over a year of mismanagement of the public health crisis.

The Philippines, which has one of the world’s longest lockdowns, remains far from achieving its vaccination target as it races against more virulent variants.

Here’s what others wished to hear in Duterte’s last SONA:

The SONA, a constitutional obligation, is a much-awaited event where the President discusses the situation in the country and where the Chief Executive typically boasts of his administration’s accomplishments in the past years and lays out directions to Congress on his priorities for the coming year.

What would you want to hear from Duterte in his final SONA? – Rappler.com