MANILA, Philippines – Some 20.7 million individuals could have rolled up sleeves and benefitted from the COVID-19 vaccines that were wasted as reported by the Department of Health (DOH) on Monday, August 15.

During the Senate panel on health hearing on COVID-19 and monkeypox response, Senator Risa Hontiveros expressed disappointment over the estimated P10.33 billion cost of squandered vaccines.

“Our vaccine program is leaking billions of pesos, both of which we sorely need for reopening our economy. Figuring out what is driving the vaccine wastage should be top priority,” Hontiveros said.

“Sa ngayon, lumalabas na mas mababa ang mga threshold sa acceptable wastage level ng WHO (Currently, we’re within the threshold of WHO for the acceptable wastage level). But billions are still billions. Kaya dapat transparent at detalyado ang reports ng mga naideliver na supply (That’s why we need to be transparent and detailed in terms of the reports of delivered supplies),” she added.

The DOH records showed that there were 20,660,354 wasted doses. The number accounts for expired vaccines and operational wastage.

“The current supply should already be enough to meet the 90 million goal without wastage. If we waste a significant amount more of vaccines, we will have to spend billions more again,” Hontiveros said.

“At this rate, by October, lampas na tayo sa threshold ng WHO (we will surpass the WHO threshold). We might have accumulated vaccines faster than we could administer them. Nakakapanghinayang na parang patapon ang paggasta ng bilyong piso para dito (It’s such a shame that we just threw out the billions of pesos spent on this),” the Senator said.

The incident of vaccine wastage comes as the Philippines lags behind in terms of booster coverage for COVID-19. 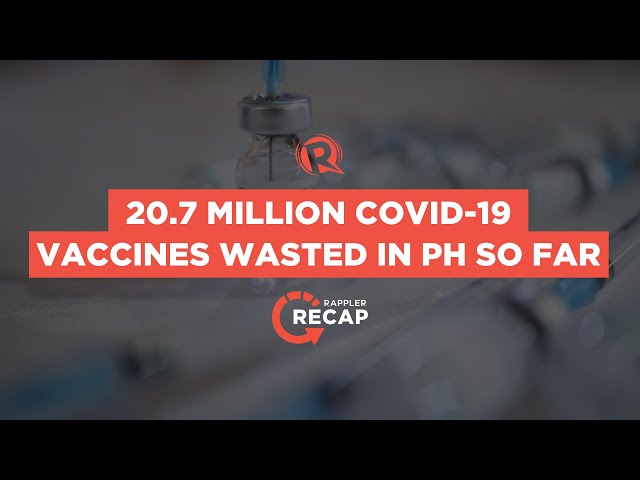 Earlier, DOH officer-in-charge Maria Rosario Vergeire said that the agency was ready to answer queries regarding the government’s vaccine deployment. She pointed out vaccine wastage was normal in any vaccination program.

Vergeire cited factors that could have led to wastage – vaccines were opened but those scheduled to take shots did not show up, power outages, unknown particles found in the vaccines, and fires and disasters that contaminated or destroyed the supplies.

Vergeire said that that of the 134 million doses procured by the national government, “we didn’t have any wastage or expiry for that.”

Meanwhile, some 40% of the vaccines procured by the private sector have expired.

During the hearing, Hontiveros pressed the DOH on who should be accountable for the wasted vaccines.

In response, Vergeire said, “So if we say that, dito po sa mga pag expire ng mga bakuna (in this vaccines that have expired), yes, we say that DOH and the National Task Force are the lead of this vaccine deployment but there are other factors involved that we could look at to improve our processes.”

Asked what’s going to happen with the wasted doses, Vergeire said that COVAX facility has agreed to replace all expired vaccines as long as these replacement vaccines will be used and will not expire again.

COVAX, formally known as The COVID-19 Vaccines Global Access Facility, is a global collaboration for speeding up the development, manufacture, and equitable distribution of new vaccines

Aside from this, Vergeire said that the national government will no longer procure vaccines for this year, as based on DOH analysis, the country’s stockpile of doses is enough to for the administration of first and second boosters.

The health spokesperson also said that the DOH is working with other government agencies, such as Department of Labor and Employment and the Civil Service Commission, in encouraging employees to get booster and improve vaccination coverage in government offices, respectively.

But on top of it all, Vergeire said that the government is working on increasing vaccination uptake in the country.

“We are now intensifying campaigns to allay fears regarding side effects of COVID-19 vaccinations, clarifying concerns regarding safety of vaccines with extended shelf life, and ensuring that health care workers are able to properly explain this to our clients,” she added.

Only 21% of the eligible population for boosters have gotten their booster shot. Several factors affected the country’s rollout of booster shots, such as vaccine complacency and pandemic fatigue. (READ: Why few Filipinos are taking COVID-19 booster shots) – Rappler.com