Here’s what we know so far about the XBB subvariant and the XBC variant. The XBB, another subvariant of the more transmissible Omicron variant, reportedly has been behind the increase in cases in Singapore in recent weeks.

The country had already lifted almost all COVID-19 restrictions on August 28, only requiring masks in public transit and hospital settings.

According to the Singapore Ministry of Health, the country reported a 7,916 seven-day moving average of local cases as of Thursday, October 20. The week-on-week infection ratio was at 1.09. An infection ratio of 1 indicates that the spread of the virus is slowing down.

While the XBB appears to evade vaccine immunity and is even more transmissible than the BA.5 subvariant, Singapore health authorities said there was no evidence that the variant has caused more severe illness in patients who have been infected so far.

“There has been no evidence of XBB subvariant causing more severe illness than previous variants. In fact, our local data in the last two weeks shows that XBB cases are estimated to have a 30% lower risk of hospitalization compared to Omicron BA.5 variant cases,” the Singaporean government said in a statement published online on October 14.

Singapore’s health minister Ong Ye Kung said the recent spike in cases would be a “short and sharp” curve, expecting it to end by mid-November. He didn’t see the need to reimpose COVID-19 restrictions in the country.

Health experts say those who are updated with their vaccinations and boosters or have been recently infected within the past three months have better protection against new variants and subvariants.

In the Philippines, health authorities also do not see a need to tighten restrictions despite the detection of the first XBB cases.

DOH officer-in-charge Maria Rosario Vergeire said in Filipino on Tuesday that “the life cycle of a virus includes mutations and new variants. The system is ready for these new cases.”

The Philippines, which recorded 1,379 new cases on Wednesday, October 19, currently has 23,347 active cases 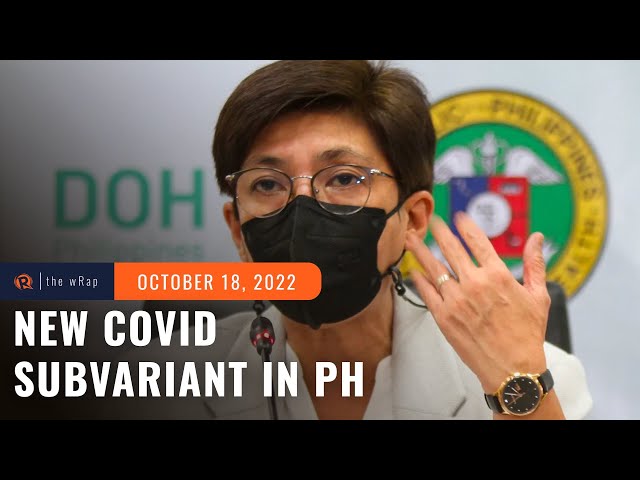 The current positivity rate nationwide is at about 13.8%, above the World Health Organization standard of 5%.

Given XBB’s immune evasiveness as well as Singapore’s experience, a spike or surge in the Philippines is possible. But a surge does not necessarily equate to an increase in hospitalizations as long as enough of the population is fully vaccinated and if a high number of the country’s eligible population are boosted.

According to the DOH’s latest data released to the public on Tuesday, at least 73.4 million Filipinos are now fully vaccinated against COVID-19. Over 20.3 million individuals have received their first booster, while 3.2 million have received their second booster.

There is still little data available on the XBC variant.

The XBC, which is said to be a recombinant of Delta and BA.2, is currently under monitoring and investigation, according to the DOH. Current vaccines are still effective against the Delta variant.

The Philippines is currently working on procuring bivalent boosters that target the Omicron variant specifically, as well as the original COVID-19 strain. Bivalent vaccines are shots that target two different strains of a virus.

Vergeire said they are in “constant coordination” with Moderna and Pfizer, and have expressed their interest to the manufacturers about entering into a deal for the Omicron-specific boosters. – Rappler.com