What we know so far: DepEd laptops allegedly resold in Cebu store LAPTOPS. Laptops similar to the ones sold to DepEd are listed for resale on Facebook.

CEBU CITY, Philippines – The Department of Education (DepEd) Central Visayas is currently probing the alleged resale in a surplus store in Cebu of laptops the agency had procured, an official said on Tuesday, October 25.

“They are now investigating the matter. Specifically, they’re checking if there’s anything missing,” DepEd spokesperson Michael Poa told reporters at the National Children’s Month press conference in Manila, according to ABS-CBN News.

A concerned resident brought a 14″ Coby NBPC 1958 laptop he purchased from HMR, a surplus store in Cebu, to local newspaper SunStar Cebu.

In a report published on October 21, SunStar said a buyer noticed markings that had been partially scraped from the laptops – markings that indicate these were the laptop units custom-made for DepEd.

The Coby laptops in question are different from the Dell laptops that were flagged months ago by the Commission on Audit for being overpriced and low quality.

Two out of the four contracts of the DepEd Computerization Program (DCP) packages signed in February 2021 supplied at least 18,680 Coby laptops, and 37,360 other gadgets.

The first contract, worth P475.5 million, was for the joint venture of RedDot and Creative labs, which supplied 8,908 laptops, smart TVs, and lapels for the Ilocos, Cordillera, Cagayan Valley, and Central Luzon regions.

The second contract supplying Coby gadgets, worth P524 million, was given to the joint venture of TechGuru and Green Atlantic, supplying 9,772 laptops, smart TVs, and lapels for the Western, Central Visayas, and Eastern Visayas regions.

DepEd Central Visayas Director Salustiano Jimenez said there were at least 100 units at some point being sold in HMR Cebu.

Rappler also independently verified the laptops were being sold in two of HMR’s stores in Luzon and Metro Manila.

The other two contracts under the DCP package lots were granted to Columbia Technologies for P974 million combined to provide Acer laptops, Samsung Smart TVs, and Moana lapels to schools in Metro Manila, Calabarzon, and Bicol, and a separate contract to provide the same products for schools in Northern Mindanao and Caraga regions.

The value of the four contracts combined under the February 2021 DCP packages procurement project are pegged at P2.377 billion. 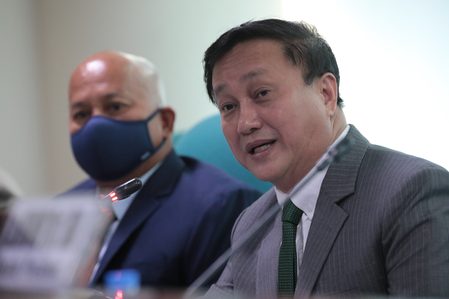 The advertisement for the laptop was posted on HMR’s Facebook page earlier in October, but it has since been taken down.

The advertisement with HMR’s company logo can still be found in Facebook marketplace selling a Coby NBPC 1958 with the same specifications as the DepEd’s laptop, also being sold for P9,999.

The DepEd has been under fire in recent months for allegedly purchasing overpriced, slow Dell laptops with Intel Celeron processors for about P58,000 per unit – around the same price as the high-end Macbook laptops with M1 processors.

The Senate blue ribbon committee recently wrapped up its investigation into the laptop deal, with committee chair Senator Francis Tolentino saying he believed there was a “conspiracy” between DepEd officials and suppliers. – Rappler.com