Facebook Twitter Copy URL
Copied
Here's what we know so far about the 'outdated' Intel Celeron laptops purchased by the Department of Education at P58,300 each 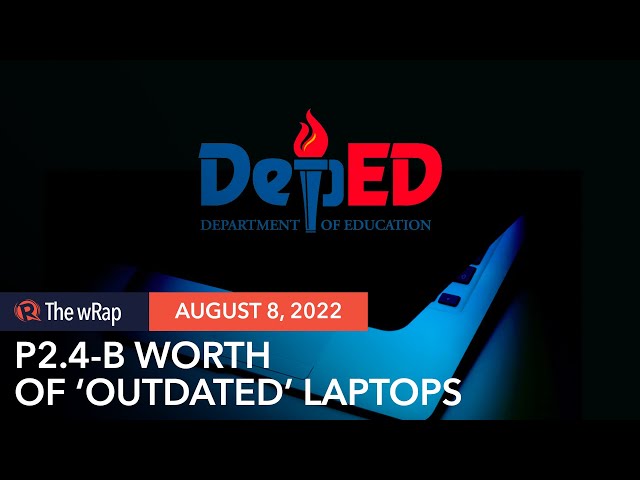 MANILA, Philippines – The Department of Education (DepEd) is under scrutiny after the Commission on Audit (COA) flagged it for buying P2.4 billion worth of “pricey” and “outdated” laptops for teachers.

The DepEd bought almost 39,600 laptops with Intel Celeron processors – among the cheapest in the market, the ones used in budget computers – for P58,300 each. The DepEd’s Intel Celeron laptops ended up more expensive than the MacBook Air with the advanced M1 chip, whose price starts at P57,990.

What did state auditors find?

In its 2021 report, the COA sought an explanation from DepEd why the entry-level laptops purchased through the Procurement Service of the Department of Budget and Management (PS-DBM) were priced at P58,300 each. Since the approved budget for the contract (ABC) was set only at P35,046.50 per unit, this amounted to an excess of P23,253.50 per unit.

Due to price jump of 66% from its original cost, the DepEd only bought 39,583 units – almost half of the 68,500 intended teacher-beneficiaries.

“The huge difference of P23,253.50 per unit price resulted in significant decrease by 28,917 laptop computers, purportedly for distribution to intended recipient-teachers which could have helped them perform their tasks in the blended learning set-up,” COA said.

The COA noted that the laptops delivered to the National Capital Region were “too slow because the processor is Intel Celeron, which is outdated, and the price is too high based on the specifications.”

State auditors sought an explanation from the DepEd why it accepted a higher price tag from PS-DBM compared to its approved budget, and recommended that the concerns of the teachers about the condition and performance of the laptops should be promptly addressed.

How did DepEd react?

In a statement on Friday, August 5, the DepEd said that questions on overpriced laptops can be answered by PS-DBM because they were the “procuring entity.”

“DepEd commits to working closely with COA to ensure the continuous improvement of its services to the public,” the agency said.

The DepEd also added that it was taking steps to address the COA audit report.

Asked why the DepEd agreed on the price of laptops set by the PS-DBM, DepEd spokesperson Michael Poa said they need some time to look into the issue.

“I don’t want to go on the record just yet without the necessary facts. This all happened before our time so I do not have the answers on hand. Rest assured that we are looking into what the issues really are with these laptops,” Poa told reporters in a Viber message on Friday.

In a statement on Saturday, August 6, PS-DBM Executive Director Dennis Santiago said his agency plans to conduct a “thorough examination” of the cost and technical specifications of the laptops procured for the DepEd during the Duterte administration.

“Should the records prove that there are indeed instances of noncompliance with the law and procurement rules, rest assured that we will never tolerate it,” Santiago said.

“The PS-DBM, under my watch, shall fully cooperate to address the Commission on Audit’s findings and recommendations regarding the procurement of P2.4-billion worth of laptops for the Department of Education in 2021,” he added.

“Teachers are especially hurt by this anomaly because while they even have to borrow money to buy a laptop for their classes, billions have been spent on this anomalous deal,” she said.

Why this issue matters

Teachers have been asking for provision of free laptops and internet services as most of them had to dig into their own pockets to cover the costs of teaching under the remote learning setup. PS was created through Letter of Instruction (LOI) No. 755 in 1978, with the primary task of implementing the central procurement system for the use of other government agencies. It is functioning as a grocery for common-use items, so that agencies could buy these from them at a low price without having to look for suppliers themselves.

It can be recalled that it was also the PS-DBM that was embroiled in the corruption controversy for anomalous government pandemic contacts. (READ: LIST: Everything you need to know about the Pharmally pandemic deals scandal)