DISTANCE LEARNING. A parent returns the modules to teachers at the Araullo High School in Manila on Tuesday, July 13, 2021.

At a press briefing on Thursday, October 7, Health Undersecretary Maria Rosario Vergeire said it’s possible, only if the risk classification in Metro Manila will be downgraded to low or minimal risk, or some areas will be placed under the minimal risk levels 1 or 2. (READ: GUIDE: Localized lockdown, alert level system for Metro Manila)

Vergeire, when asked about the possibility, said the criteria the Department of Health (DOH) is using to assess which schools would join the pilot run is applicable to all areas in the Philippines.

(Our criteria that was agreed upon with DepEd is that the area has to be low or minimal risk for COVID-19 so we could assure the safety of students and teachers. That’s why we only included those areas that are under alert level 2.)

Under alert level 2, all ages are allowed to move around their area subject to local rules.

The health spokesperson added they would see in the coming days which schools will be added to the 59 schools which initially passed assessments to conduct limited face-to-face classes.

(So for example, if cases in NCR have decreased and its healthcare utilization has decreased as well, and they have been classified under alert level 2, NCR schools can be included.)

However, Vergeire explained that while the whole Metro Manila is placed under alert level 4, there are still areas in the region that have low risk classification or low alert levels. She said that the DOH and DepEd are looking into this possibility of going granular in their assessments.

(For example, there’s a barangay or area that has school and we saw that it has minimal risk, even though the whole NCR is at alert level 4, we can include that in our pilot list.)

Currently, Metro Manila is under moderate risk classification and alert level 4, which means persons younger than 18 and older than 65 with comorbidities, as well as pregnant women, must stay at home.

On Wednesday, October 6, DepEd released the initial list of schools that have been approved to conduct limited face-to-face classes. 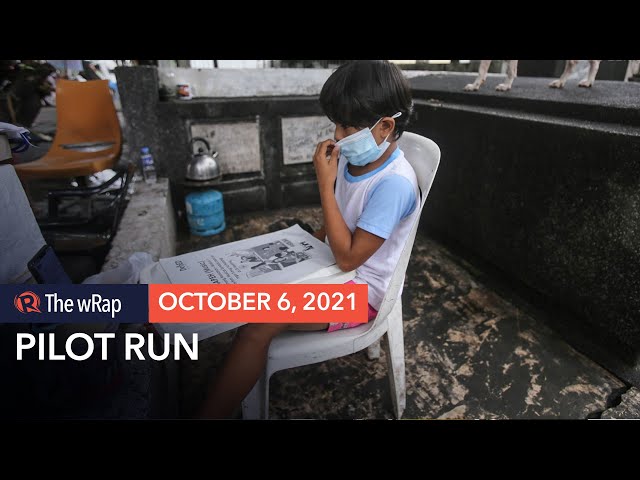 Education Undersecretary Nepomuceno Malaluan said that 59 public schools have passed the assessment of health officials to conduct the pilot face-to-face classes. He added DepEd will continue to assess the more than 600 nominated schools until the initial number of 120 schools for the pilot run is reached.

Most of the schools are from the Visayas and Mindanao, while some schools in Masbate province in Luzon are also included.

Check this page for the list of approved schools. Rappler will update this as new advisories come in. – Rappler.com

Read Rappler stories on the limited face-to-face classes for the basic education in the Philippines: