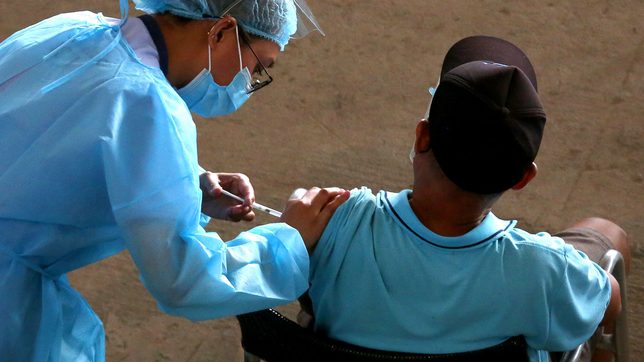 PROTECTION. A senior citizen receives his first dose of the COVID-19 vaccine at the Pasay Giga Vaccination Center on May 14, 2021.

Facebook Twitter Copy URL
Copied
(1st UPDATE) The public first found out about the fraudulent scheme when makeup brand CEO Nina Ellaine Dizon-Cabrera posted about it on Twitter in May. Now, the PNP claims she's a suspect.

The young businesswoman who first alerted the public about the alleged illegal sale of government-procured COVID-19 vaccines in some local government units (LGUs) in Metro Manila said she will fight back following the criminal complaint filed by the Philippine National Police (PNP) against her.

On Wednesday, June 9, the PNP named Nina Ellaine Dizon-Cabrera, CEO of Colourette Cosmetics, as among the three suspects in the fraudulent scheme, alleging that she “offered 50 to 100 vaccination slots in Mandaluyong.”

Cabrera, Cyle Cedric Bonifacio, and Melvin Polo Gutierrez are all facing charges for estafa and for violation of the Anti-Red Tape Law of 2007 and the Cybercrime Prevention Act of 2012 before the Mandaluyong Prosecutor’s Office.

“Right now, we’re still waiting for that letter from the prosecutor’s office, and we’ll discuss after that. But definitely, we’ll be fighting these alleged charges because they are false,” Cabrera said in an interview with the ABS-CBN News Channel on Thursday.

She denounced her inclusion in the PNP’s charge sheet and lamented that the police did not get in touch with her after she exposed the “vaccine for sale” scheme online.

“I am completely baffled as to why I am being dragged into this scheme when in fact, I exposed this exact scam on my Twitter account last May 21, 2021,” she said in a statement on Wednesday.

“I am already in communication with my lawyer regarding this matter. The truth, as always, shall prevail,” she added.

Dizon was in the spotlight late last year after some netizens called for a boycott of Colourette products after the businesswoman criticized the government’s response to disasters.

On November 12, 2020, Dizon took to Twitter to emphasize the need to hold the government accountable as Typhoon Ulysses ravaged many parts of the country, leaving thousands displaced. Dizon used the hashtag #NasaanAngPangulo, referring to President Rodrigo Duterte.

In response to the boycott call, Dizon pledged that 100% of sales from over 5,800 units of their hero product, Colourtints, would be donated to victims of the typhoon. She even used the hashtag #boycottCOLOURETTEcosmetic to announce their fundraising drive. The products were sold out and she raised P1.6 million for the typhoon victims.

Bonifacio, a son of a barangay councilor, was already presented by authorities to the media as a primary suspect on May 26.

Businessman and Las Piñas resident Norman Rabaya, whose tweet about the alleged illegal selling of vaccines on May 21 also caught the attention of Philippine authorities, confirmed to Rappler on May 26 that it was Bonifacio who offered him a vaccine slot in the city government of Mandaluyong.

Police said Bonifacio was the one who tagged Gutierrez in the fraudulent scheme.

(When Bonifacio made the offer to a classmate, he named Gutierrez, a fire and barangay volunteer, as his alleged contact to get a vaccination slot in Mandaluyong.)

What has been the aftermath?

The city governments of Mandaluyong and San Juan, which were tagged in the controversy, have denied their involvement in the scheme.

Malacañang has also urged LGUs to pass local ordinances against the “vaccine for sale” scheme.

Prior to the Palace’s call, Manila already signed an ordinance which prohibits any person or entity from engaging in the sale, distribution, or administration of COVID-19 vaccines for profit. Violators will face a P5,000 fine and jail time of up to six months. Reports of alleged under-the-table sales of COVID-19 vaccines surfaced in May as only select sectors were allowed at the time to receive the vaccines since the Philippines’ immunization drive against the coronavirus began in March.

The government only gave the green light for the vaccinations of economic frontline workers on June 7.

“It is in this regard that I ordered both the Directors of the CIDG and the ACG to review the cases that were filed against her before the Mandaluyong Prosecutor’s Office in order to check if there were lapses in the conduct of investigation and in the preparation of the cases,” Eleazar said in a message to reporters. — Rappler.com