Ong filed a counterclaim last week, January 17, asking a Pasay court to dismiss the damage suit and make Enrile pay her instead a total of P88 million in damages and P1 million in attorney's fees.

She did not cause Enrile any damage, she said. His "reputation is not the spotless or untarnished one that he alleges," reads the complaint.

It is Enrile's lawsuit that caused her moral and exemplary damages for violating her freedom of speech based on unfounded claims, she said.

In her two counterclaims, Ong asked the court for P30 million in moral damages, P58 million in exemplary damages, and P1 million in attorney's fees.

And if the court favors Ong, she said she will donate the money to the victims of the Marcos dictatorship.

Ong said Enrile can afford to pay P89 million because he has a net worth of P117.7 million based on his latest Statement of Assets, Liabilities, and Net Worth (SALN).

The ad veteran is represented by human rights lawyer Jose Manuel Diokno, who is looking forward to the trial. Diokno is also the Dean of the College of Law of De La Salle University.

"It is not often that we get a chance to litigate history and look deeply into the reputation and character of a public figure as prominent as Senator Enrile. The trial will give the public a unique window into Senator Enrile’s past. It will also be the first time that a Philippine court will hear evidence on his role in the Marcos regime, and more generally on his public conduct, reputation, and character,” he said in a statement.

The civil case is pending before Branch 118 of the Pasay City Regional Trial Court.

'Enrile's reputation not as spotless as he claims' 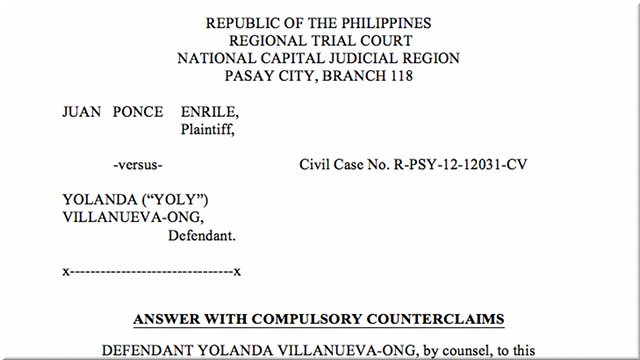 The court battle originated from Ong's October 2012 column, "Like Father, Like Son," published in The Philippine Star.

Enrile's damage suit reads: "The article characterizes JPE [Enrile] as liar, fraud, and manipulator. It accuses JPE of attempting to 'revise history' with a devious purpose of enticing the electorate to support his only son, Juan Castañer Ponce Enrile, Jr (popularly known as Jack Enrile), an incumbent congressman in the province of Cagayan and a candidate in the upcoming senatorial elections."

Ong stood by her column and maintained she did not act with malice. "The statements contained in that column were made honestly, in good faith, and to protect the interest of the community and the public," she said in her counterclaim.

Enrile's reputation is not as "spotless" as he claimed in the damage suit, she added.

"Plaintiff’s reputation is not the untarnished and good one that he alleges in the Complaint. It has been marred and tainted by his role in the Marcos dictatorship, his own declarations, and his other public acts and conduct," the counterclaim reads.

1. "His contradictory public statements regarding the 'ambush' or 'assassination' attempt that took place on 22 September 1972;"

2. "His active participation in and support of the dictatorship of Ferdinand Marcos, as a member of the latter’s inner circle, as Executive Committee Chairman of the National Security Council from 1972 to 1986, and as Minister of National Defense also from 1972 to 1986; during which time thousands of Filipinos were arrested and denied their basic human rights, by government agents under plaintiff’s jurisdiction;"

4. "And other incidents over the many years of his public life including the recent controversy over the senators’ 'Christmas gifts'"

Meant to harass her?

Ong made two counterclaims to show that Enrile's damage suit was meant to harass and silence her.

One, no lawsuit was filed against the publisher, editor, and the newspaper that published her column or against other journalists who wrote similar commentaries against Enrile.

"Plaintiff’s act of prosecuting Defendant Ong alone constitutes harassment, malice and evident bad faith. It is meant to intimidate and silence defendant Ong and other journalists, and to place a chilling effect on their ability to write about plaintiff’s public conduct on matters of public concern," reads her counterclaim.

For this, she asked for P10 million in moral damages, P20 million in exemplary damages, and P500,000 in attorney's fees.

Two, Ong said it is her constitutional right to make "fair comments on matters of public interest."

"Plaintiff’s above-mentioned acts have directly and/or indirectly obstructed, defeated, violated, impeded or impaired Defendant Ong’s freedom of speech and freedom to write for the press, and continue to do so; and have caused defendant damages....," the counterclaim reads.

For this, she asked the court to award her P20 million in moral damages, P38 million in exemplary damages, and P500,000 in attorney's fees. - Rappler.com