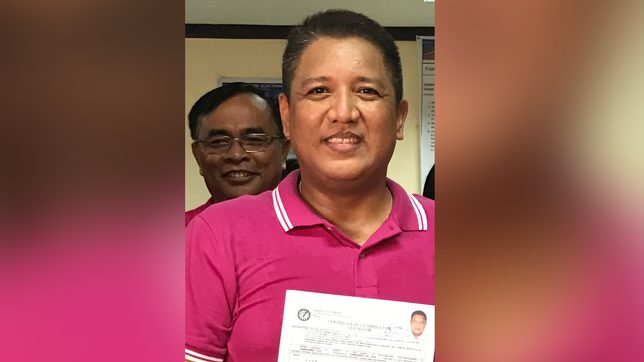 ALLIES. Vice Mayor Rommel Agan with councilor Elbert Atilano behind him when they filed their respective candidacies in 2019.

Office of the Vice Mayor

Facebook Twitter Copy URL
Copied
Climaco is serving her third and final term as mayor, and plans to run for congresswoman in Zamboanga's 1st District

One of the groups preparing for a four-cornered fight for Zamboanga City’s leadership in the 2022 elections is formally announcing candidates under its ticket on Thursday, September 23.

Vice Mayor Rommel Agan, who has declared he would run for mayor next year, said his ticket includes at least three of the city’s 16 councilors: Elbert Atilano, Jihann Edding, and Jimmy Villaflores.

Atilano, who is being groomed as Agan’s running mate, and the two other councilors joined the vice mayor in severing their political ties last August with Mayor Maria Isabelle Climaco and her Partido Prosperidad y Amor para na Zamboanga (PPAZ).

Mayor Climaco, who decided to support the mayoral bid of Representative Cesar Jimenez Jr. of the city’s 1st District with whom she plans to trade places in next year’s elections, confirmed in a September 16 post on Facebook that Vice Mayor Agan and the three councilors left her group to pursue their political plans.

Climaco had kind words for her former allies. “We thank Vice Mayor Rommel Agan, Councilor Bong Atilano, Councilor Jihann Edding, and Councilor Jimmy Villaflores for the fruitful years of support and partnership on our agenda of governance. As they leave the coalition for the 2022 elections, we wish them luck in their plans and endeavors,” read Climaco’s post.

Climaco is serving her third and final term and plans to run for congresswoman in Zamboanga’s 1st District.

The officials ran under the Climaco-Agan led coalition in 2019, winning the majority of the local positions up for grabs that year.

Agan said he had time to think about his political plans when he went to the US recently until his 10-day mandatory quarantine in Manila upon his return in August.

He said he “used the time to pray, reflect and discern on my future, and Zamboanga’s direction post-Mayor Beng.”

Agan, a lawyer whose father Vitaliano was a well-loved Zamboanga mayor, said he would formally announce his candidates on Thursday, but it was unclear if he already has a full ticket.

Before Agan and the councilors left the Climaco group, the mayor denied that her coalition was breaking apart.

With this new development, she said, “Team Climaco remains strong, united, and committed to continue to work hard in this pandemic which is to heal the sick and feed the hungry, na favor de Dios continua dale curada, comida y busca vida na tiempo de pandemia. Ciudad antes de todo (that in God’s grace, continue to give treatment, food, livelihood in this time of the pandemic. The city first before anything else).”

Climaco has opted to throw her support behind the mayoral bid of Jimenez, a first-term congressman, and his likely running mate, councilor Josephine Pareja.

Aside from Agan and Jimenez, two other politicians have announced their separate bids to succeed Climaco. They are former congressman and mayor Celso Lobregat and councilor John Dalipe. – Rappler.com