Dec 26, 2015 1:05 PM PHT
Facebook Twitter Copy URL
Copied
(UPDATED) Some people would hire someone to kill to get out of a bad marriage 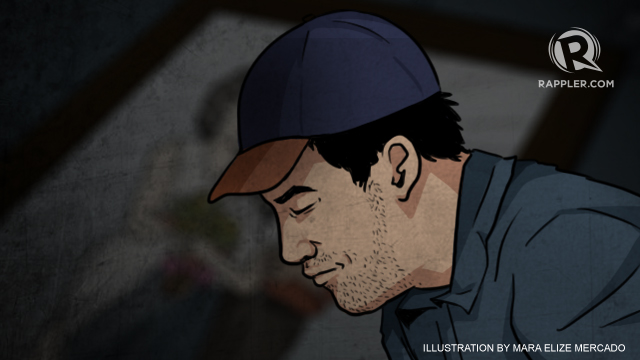 MANILA, Philippines (UPDATED) – “It’s cheaper to hire a hit man than get an annulment!”

It’s often said as a joke, a desperate and frustrated response to the cost and grueling process of getting an annulment.

But Cayetano (not his real name) agrees with the statement.

Cayetano is a hit man, a gun-for-hire, an assassin. And in the only country in the world without divorce, he is sometimes seen as the only way out of a bad marriage. A judge has a gavel, Cayetano has a gun and it will only take P50,000 for him to pull the trigger.

We found Cayetano through his “handler” who acts as a go-between for the client and the contractor. The tactics and operations he describes in this interview were confirmed by security contacts and other people in the business. He spoke to us on condition of anonymity and requested that we morph his voice.

Most of his contracts are business-related, usually about eliminating the competition. He has had only a handful of requests to do in spouses.

Nonetheless, Cayetano knows first-hand that some couples have chosen to take their vow of “till death do us part” to a gruesome conclusion.

Listen to the interview with him above, guided by a transcript in English below:

In a country without divorce, sometimes only death can do you part. There’s no more intense feeling than love. Except…maybe heartbreak. It makes you go crazy. It makes you want to kill a person. But no one really does this…right?

In my line of work, around seven or nine.

No one does it… until they do. And this man knows first hand that some people have taken their vow of  “til death do us part” to its most gruesome conclusion.

When you do a hit, you have to be sure. The target has to be down with two shots.

This is Cayetano. Obviously this isn’t his real name. He’s a hit man. An assassin. A gun-for-hire.

We found Cayetano through his “handler” who acts as a go-between for the client and the contractor. The tactics and operations he describes in this interview were confirmed by security contacts and other people in the business. He spoke to us on the condition of anonymity and requested that we morph his voice.

At this point, I want to make it very clear that we are not advertising Cayetano’s or any other hit man’s services. We are not supporting his line of work or the motivations of the people who hire him. Nevertheless, this happens. When there’s no way out of a marriage, some people resort to murder.

It’s easier to look (for a hit man) than file an annulment – how many years will that take? You will spend a lot of money. While with a hit man, fifty thousand, it’s done. You don’t have to wait very long.

You don’t have to worry about other things. You just have to wait for it to happen. That’s why it’s easier to look for a hit man. Just have him killed.

And then, Cayetano takes over.

They will give you…where that person lives, what he does every day.  We get that information from the spouse contracting the hit or the sibling who was instructed by the spouse. What that person does, where that person goes, what time he goes home. The picture is the most important.

We sell brooms, blankets, whatever can be bought so we won’t be noticed. Lotion, perfume, things like that. Surveillance takes around a week. Then the next week, you do the job.

When you go for the hit, you have to make sure you can do it.

Q: So how do you do it? When you do surveillance, you are alone, but when it’s time for the hit?

We are two. We have a getaway vehicle.

Q: Where do aim so you’re sure the job is done?

If the person is sitting down, aim for the body. When he’s down, give one to the head so you’re sure he won’t live.

Q: Are you chased? A getaway is really needed?

Q: What time do you usually do the hit?

Usually, lunchtime. There are a lot who are off duty, they’re eating. That’s the usual.

Q:  Don’t you get caught in traffic?

Oh, you know, when you have a motorcycle, you can weave through even the narrow streets. When we’re on a job, we wear a helmet. People have to see that we are wearing helmets and jackets.

Q: And then you change clothes?

Yes. After, when we are far enough, we have to change clothes. My companion will drop me off and I will ride another vehicle. I will ride the jeep. We will be far enough. We won’t be noticed.

Q: How did you get started in this kind of work?

Yes, I’ve thought of that, too. But if no one will contract our services, then we won’t have money. If there are no families that split up, we won’t have money. It’s like that.  You think they need you and you need them. We’re helping each other out. I also feel sorry for the contracting party. They will say they can’t take it anymore, they can’t take their spouse anymore and that’s why they are doing this. We don’t accept jobs when we don’t know the reason. We will ask, what is your reason for doing this? They will say, I can’t take it anymore. It is really needed.

The husband…the wife who ordered the hit might have taken some dark comfort in hiring a guy like Cayetano. But there are more ways than one to pay a price. Hiring a hit man may seem like an easy solution at first. But in the end, they alone are the ones who have to live with the guilt from what they’ve done. After it’s done, we’re out. We have nothing to do with them anymore.

I’m Aurora Almendral and this is the business of heartbreak.