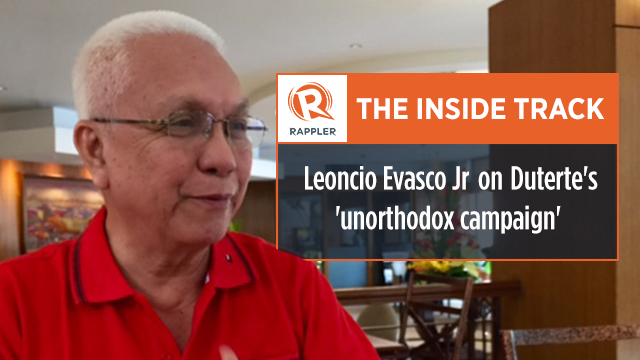 MANILA, Philippines – The campaign of candidate Rodrigo Duterte may yet be the first presidential campaign run out of Manila and by a former priest and underground rebel.

Leoncio Evasco Jr, mayor of  Maribojoc in Bohol province, was a member of the New People’s Army and, after his arrest in the early 1980s, was detained for 3 years. It was then that Duterte, a government prosecutor, met the political prisoner. They have since been good friends.

Evasco has run Duterte’s campaigns for mayor of Davao. This is his first foray into a national campaign.

In this interview, Evasco speaks with Rappler editor at large, Marites Vitug, on how the campaign is forging on. He also discusses Duterte’s message of “real democracy” as opposed to “elite democracy”, and the biggest hurdle on the road: campaign funds.

Rappler caught up with Evasco while he was on a brief visit to Manila.

This podcast is part of a series of interviews with key personalities in the campaign of presidential candidates. Listen to Inside Track and send us your feedback. – Rappler.com