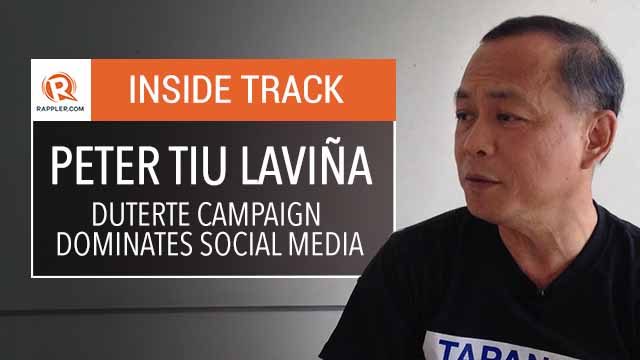 MANILA, Philippines – Among presidential candidates, Rodrigo Duterte appears to be the darling of social media. He has the most active and engaged followers on Facebook.

Spokesperson Peter Tiu Laviña, who heads the Duterte campaign media group, explains to Rappler editor at large Marites Vitug that this is a deliberate strategy, shaped in part, by the lack of funds.

The digital army of volunteers is guided by two rules, says Laviña, one of Davao City’s pioneer bloggers and former councilor: their posts should be “good for the country” and “good for the candidate.” With these marching orders, they live by their hashtag: #JustDuIt.

Conflicts, of course, arise along the way, caused primarily by the controversial candidate’s own remarks. This makes Laviña a “fireman”, putting out the fires stoked by Duterte’s words.

Listen to this interview, part of our series with key people behind presidential candidates. Let us know your feedback. – Rappler.com