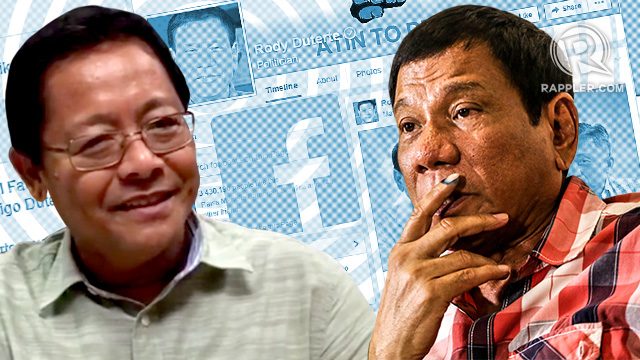 Gabunada, who directed Duterte’s social media team, told Rappler during a Facebook Live interview on Tuesday, May 31, that the lack of funds forced them to be creative in organizing the online presence of the Davao city mayor’s campaign. (READ: 10 takeaways from Duterte’s digital campaign)

“To a certain extent, this might have encouraged us to work harder, to use our skills from organizing, from alliance work, to organize these people on social media,” he explained. “When you don’t have money, you become more creative and you work harder.”

Because of their “creative” strategy, Gabunada said they weren’t really able to spend the entire P10 million ($214,199)* budget given to them.

Working within their means

They had to work within their means guided by Duterte’s principle of “not sacrificing our principles just to raise money for the campaign.”

So how did they do it?

For starters, Gabunada said that it helped that there were already existing groups of Duterte supporters even before the official election period. The only problem was, they were “all over the place.”

So once it became certain that the Davao City mayor was running, the huge array of groups was organized into 4 major groups: the overseas Filipino workers (OFWs), Luzon, Visayas, and Mindanao.

These groups were handled by another group of people, aside from the influencers they had tapped from the areas. They were the ones in charge of making sure that the plans push through.

“Every day of their lives they talked to these people, discussed whatever the new findings, and provided them the so-called message of the week,” Gabunada explained.

The “message of the week” usually came in the form of hashtags to be trended on Twitter or posted in the comments section of social media posts. Each message depended on what issues Duterte faced or what results the surveys showed.

“During a certain point in the campaign when we wanted [them] to reiterate their support [for] Duterte, we popularized or made it a point the hashtag #DutertePaRin would trend on the Internet,” he said.

Another time that the “message” was clear was during the bank controversy involving Senator Antonio Trillanes IV. According to Gabunada, the hashtag used to reaffirm the people’s support for Duterte despite the “black propaganda” was #DuterteTilTheEnd.

“It was an expression that we will stick with him until the end of time,” he said. “When we quickly trend like that, people can now say that no amount of black prop will hit this certain candidate.”

Negative campaigning, meanwhile, was also part of the arsenal, like a tit for tat. But Gabunada said they made use of “what was already available in the public” such as videos and past photos of each candidate.

“We do have a very good description of each candidate but what we do use, are those who are already out,” he said. “We just amplify it.”

For a person on the other side without knowledge of community organizing, the sudden surge of online sentiments for Duterte looked like it was made by “bots.” (READ: KathNiel, Twitter bots, polls: Quality, not just buzz)

However, Gabunada insisted that his social media team did not make use of them but instead relied on “influencers” on social media who were actual people with a strong following.

“We used live people, not bots,” he emphasized. “When we want certain things to trend on Twitter, we have our Twitter warriors who post like anything or keep the same post just to have a quick trend.” In some cases, they just copy pasted messages.

Gabunada estimated there were around 400 to 500 volunteers but each volunteer had his or her own network to tap.

“We were able to amplify in the sense that each one of the volunteers was handling groups with members of around 300 to 6,000,” he explained. “I think the biggest group had 800,000 members.”

With a huge group of supporters, there will really be bad apples. The Duterte campaign trail was full of supporters who did not hold back in attacking people who dared go against the Davao city mayor’s candidacy.

An example was when Facebook user Renee Juliene Karunungan openly declared she was campaigning against Duterte on her Facebook account. What followed were hundreds of hate messages wishing her to be raped, among other threats. (READ: ‘Sana ma-rape ka’: Netizens bully anti-Duterte voter)

Another instance when some Duterte supporters crossed the line was when they bullied and harassed a student of the University of the Philippines (UP) Los Baños who asked the mayor a question during a forum in March.

Gabunada admitted there are really supporters who bash other people but that they immediately act on it. (READ: Duterte to supporters: Be civil, intelligent, decent, compassionate)

“If there are people whom we thought are doing something that are no longer good, we call their attention,” he explained. It came to a point when he even asked someone close to the mayor himself to tell people “to stop bashing.”

The morning after the elections, the president-elect called for healing. It was picked up by the social media team and amplified using the hashtag #HealingStartsNow.

With the election period finally over, the team made up of “fast and agile social media warriors” intends to continue campaigning while at the same time providing a channel for constructive criticism.

“Now, we have to continue campaigning. We only got 40% of the votes so we want more than that to govern effectively,” Gabunada said.

“The social media team will be a conduit [for] possible complaints [against] the administration, on the appointments,” he added. “We intend to do that moving forward.” – Rappler.com