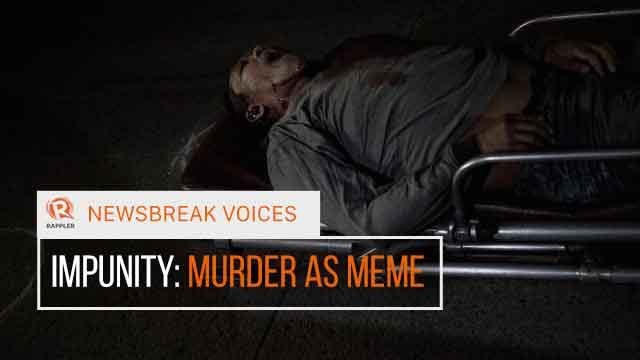 Facebook Twitter Copy URL
Copied
In recent weeks, the cardboard messages found beside victims of the war on drugs have begun to incorporate jokes, memes, and the occasional scribbled drawing

MANILA, Philippines – In the government’s bloody war against drugs, at least 3,841 were victims of extrajudicial or vigilante-style killings. Many of the victims were found with cardboard signs beside their bodies, proclaiming them drug addicts or drug pushers.

In recent weeks, the cardboard messages have begun to incorporate jokes and the occasional scribbled drawing. Manila is where murder has been reduced to a meme.

9-minute listen. Written by Patricia Evangelista, read by Chay Hofileña, edited by Emerald Hidalgo. If you missed the full story, you can read the text story here. – Rappler.com