Is the Inquirer’s impending sale a Manila Times redux? 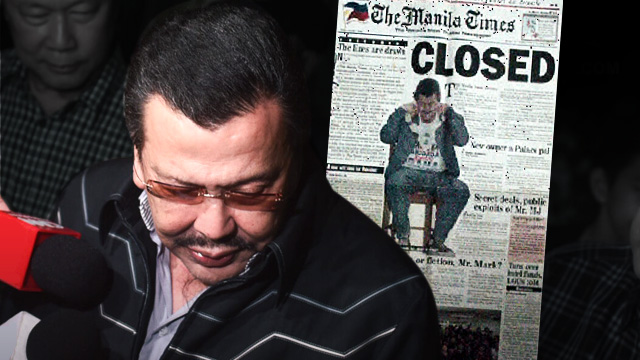 MANILA, Philippines – The Philippine Daily Inquirer is being sold to a business tycoon with close ties to President Rodrigo Duterte. Some political observers draw comparison of the impending sale to what happened with The Manila Times during the administration of President Joseph Estrada in 1999.

Does the comparison have basis?

Yes, if we look at both newspapers being critical of the sitting president, and ending up being sold to businessmen close to the chief executives. No, if we consider that The Manila Times was abruptly forced to sell for a song, while the Inquirer willingly negotiates with the buyer for sometime for a hefty price. (READ: Ramon Ang and his media interests)

On Monday, July 17, the Prieto family announced that it was in talks with Ramon Ang, head of San Miguel Corporation, for the sale of its majority stake in the Inquirer. In a statement, Marixi Rufino-Prieto, the Inquirer Group’s chair, said the family’s decision to divest after 25 years of owning the newspaper is “strategic” and would maximize growth opportunities for the media company. (READ: What you should know about the Inquirer Group)

The sale comes amid President Duterte’s months-long tirade against the newspaper over its critical coverage of his anti-illegal drug campaign. (READ: Duterte threatens ‘exposé’ vs Inquirer)

Inquirer is no stranger to presidential intimidation in its 31-year history, however. Under Estrada, it survived an advertising boycott orchestrated by Estrada’s friends in the entertainment industry.  (READ: The courage of Letty Jimenez-Magsanoc)

While Estrada failed to bring down the Inquirer, he succeeded in forcing another newspaper, The Manila Times, to sell to a crony. The newspaper, which carried a headline that irked the President then, was owned by the Gokongwei family, who eventually sold to an Estrada crony, Mark Jimenez (now deceased).

Here is a record of events from 18 years ago:

The Manila Times publishes a story “Palace in P17-B contract rigging” written by its business reporter at the time, Joel Gaborni.

According to the story, Estrada was an “unwitting ninong (godfather)” to a contract between the state-owned National Power Corporation and the Argentine firm Industrias Metalurgicas Pescarmona Sociedad Anonima (IMPSA), which underwent last-minute changes – literally shortly before Estrada was scheduled to witness the signing.

Estrada files a P100-million libel suit against The Manila Times over the story.

The story, he claims, attacks his “reputation, honor, and dignity” and “honesty and integrity as a public official.”

“I hate to do this, but it’s too much already,” Estrada is quoted as saying . “They can criticize me, it is a democratic country. But if they accuse me of graft and corruption, that’s a different story.”

Under pressure from the President, the owner of The Manila Times runs a front-page apology to Estrada.

In the apology, Robina Gokongwei-Pe, president of Metromedia Times Corporation, offers her “sincerest apologies for the anxiety” Estrada has felt over the story. She says the story “was never intended to malign or impugn the sterling reputation you have built over decades of dedicated public service.”

The apology triggers the resignation of senior editors and writers and sparks media debate on press freedom.

“In response to the public apology to me by the President of The Manila Times, I have today instructed my lawyers to drop immediately the libel case that I had earlier filed against that newspaper,” his statement reads.

Estrada, however, denies allegations that Malacañang has pressured the Gokongwei family and threatened to raise tax issues against the family’s bigger businesses.

The Manila Times editors and staff who chose to stay behind continue to publish the newspaper, vowing to bring credibility back. But administration pressure on the Gokongweis persisted.

The Gokongwei family sells the Manila Times to Katrina Legarda and Reghis Romero for a song: P20 million. Romero only serves as a front for Estrada crony Mark Jimenez.

In a statement, Gokongwei-Pei says it is time “to allow others the opportunity and the privilege to continue publishing the Manila Times.”

The Manila Times prints its final issue under the Gokongweis with a banner story that screams “Closed.” 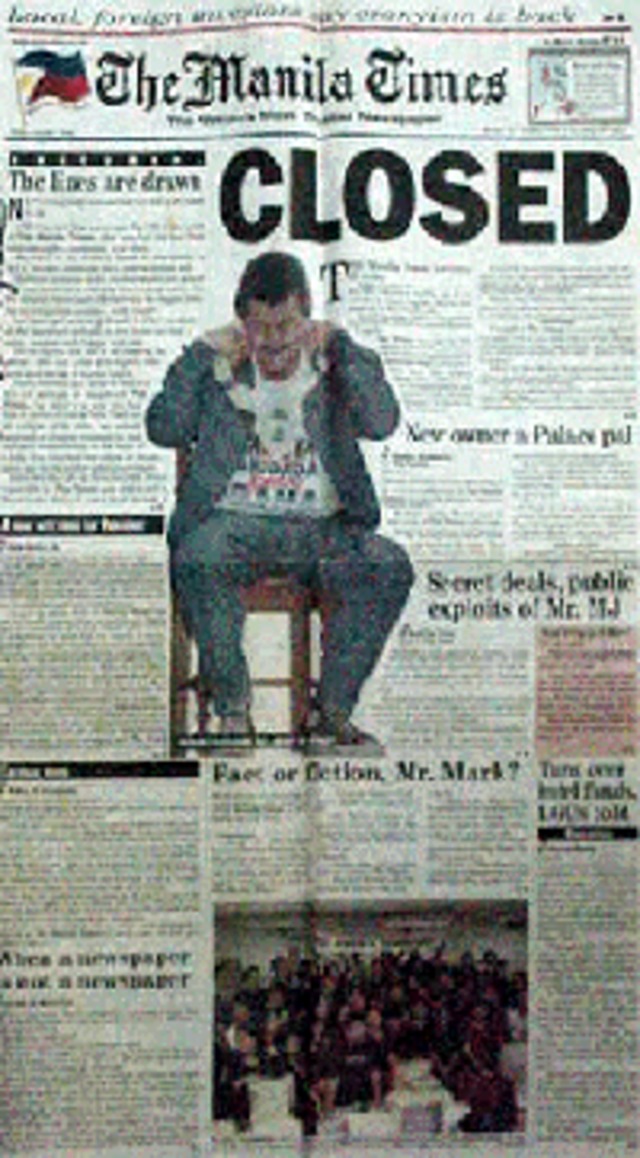 In a statement released prior to the closure, then Manila Times editor-in-chief Malou Mangahas says the sale is, in truth, “death by corporate strangulation of a newspaper with an independent editorial staff.”

“In fact, it unfolds after a group of persons closely identified with President Estrada, has allegedly acquired – or is conspiring to acquire, buy into or buy out – several print and broadcast media agencies,” she writes.

“By all indications, the asset sale of The Manila Times is part of an insidious effort by this group, acting supposedly in the name and on behalf of the administration, to tame a critical press, through the backdoor.”

The new owners resume publication of the newspaper after a few months.