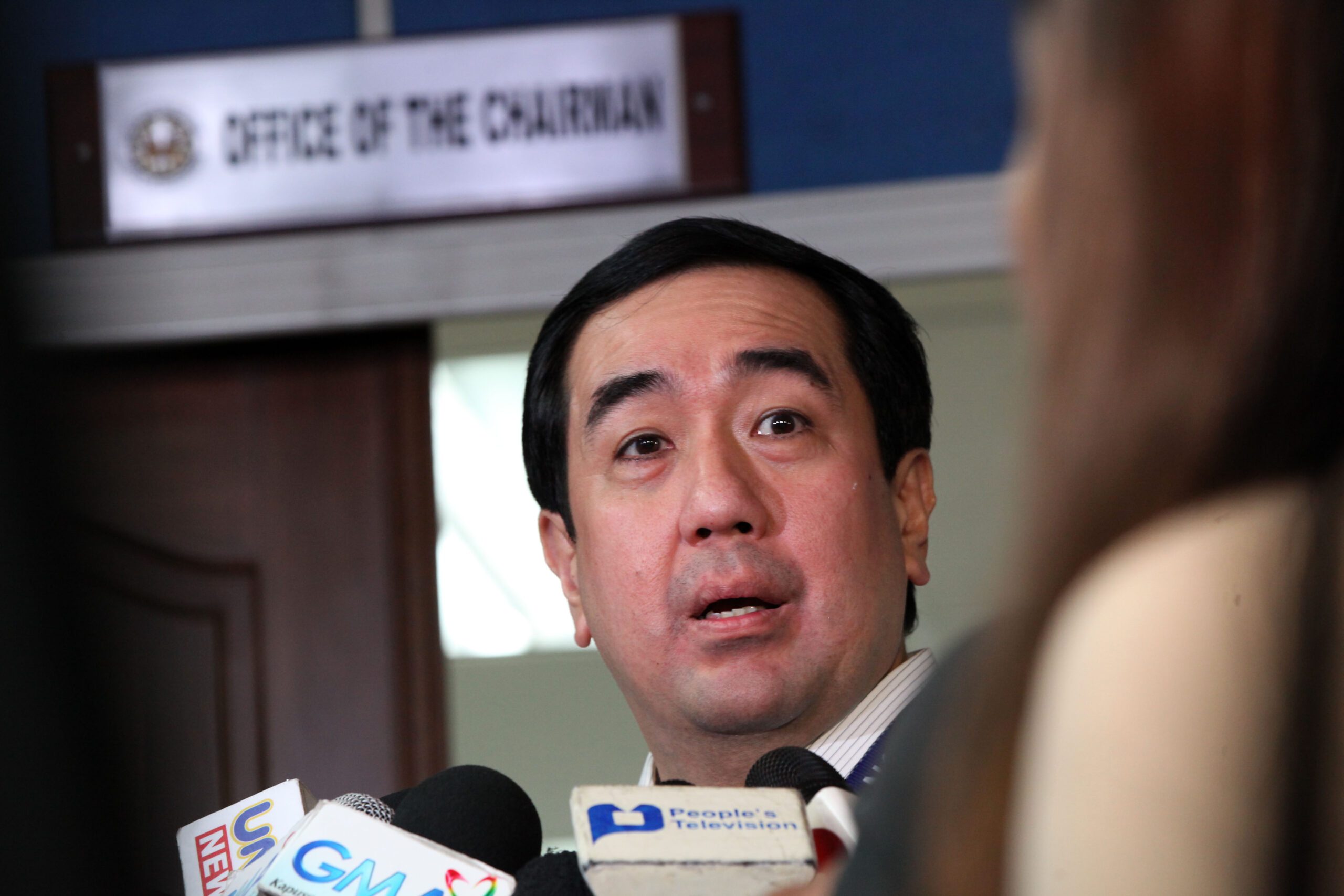 MANILA, Philippines – The affidavit of Patricia Paz Bautista against her estranged husband Commission on Elections (Comelec) chair Andres Bautista lays the groundwork for a possible impeachment complaint against the poll chief.

The word impeachment is mentioned at least twice in the affidavit that accuses the Comelec chief of unexplained wealth and failure to declare these in his Statement of Assets, Liabilities, and Net Worth (SALN). (READ: Who is Comelec chair’s estranged wife Patricia Bautista?)

“He is liable to be impeached should there exist valid and sufficient grounds to hold him in trial for an impeachable offense under Section 2, Article XI of the 1987 Philippine Constitution,” the affidavit reads. (FAST FACTS: Who is Comelec chair Andres Bautista?)

Patricia’s lawyer Lorna Kapunan said as much. “Kung ganyan ang chairman natin, ay dapat tanggalin na yan sa puwesto (If the chairman is like that, he should be removed from his post),” Kapunan was quoted saying in a report.

Patricia accused her husband of lying in his SALN, betraying public trust, and violating the Anti-Graft and Corrupt Practices Act and the Anti-Money Laundering Act.

Patricia claimed to have documents showing that her husband has deposits, properties, and investments totalling nearly P1 billion. The total wealth doesn’t match the P176.3 million declared in his 2016 SALN. But she said it’s possible the Comelec chief may have moved these money.

Her husband supposedly cut off her financial support when she took these documents in an attempt to make her return them to him.

The Comelec chief outrightly dismissed allegations made by his wife and accused her of extortion.

“I am the victim here. I am a victim of infidelity. I feel raped in my own house,” he said in a press conference on Monday.

To put the issue to rest, the Comelec chief needs to explain bank deposits, properties, and investments that he failed to declare in his SALN.

The poll chief said he has combed through the supposed documents with the Philippine Daily Inquirer, which broke the story of Patricia’s allegations.

He maintained that he declared all his properties in his SALN. He said some of the accounts are fake while other accounts are shared with family members who had been co-investing with him.

Here’s a list, based on the affidavit executed by Patricia.

Patricia’s affidavit listed 30 bank account numbers that she claimed had, at one time, deposits totalling P227,701,053, which is already more than his net worth based on his SALN.

Patricia said the deposits mostly ranged from P5 million to P15 million but there were two accounts that only had less than P1 million.

Patricia listed 5 other bank acounts that had up to P101,519,909 in total deposits at one time. The amounts ranged from P12 million to P29 million.

This is a lie, according to Bautista. “Kung ‘yan mayroon man, sa kanya na (If that exists, it’s hers),” he said.

Patricia claimed many of the deposit transactions were made “almost every day” in 2016, an election year.

“The substantial deposits and withdrawals on each of these bank accounts were made within the last 2 years and coincidentally, while Andy was already the Comelec chairman and when the 2016 national and local elections were conducted,” the affidavit reads.

She claimed many of the deposits were below the P500,000 threshold, “probably to avoid the AMLA detection.” AMLA refers to the Anti-Money Laundering Act.

Patricia also accused her husband of failing to declare at least two properties, one in Metro Manila and another in the US.

1. Condominium unit at The Suite at One Bonifacio High Street, including parking slots

2. The District in San Francisco, California

The properties that she found under the name of the Comelec chief are supposedly worth up to P300 million or almost twice his declaration in his 2016 SALN.

Patricia also listed 3 foreign companies that she suspects her husband also owns because she found him keeping their documents in their home. She said these companies made investments in the form of interests in corporations and loan agreements.

The company was supposedly established in the British Virgin Islands in 2010.

The company established in Brunei Darussalam in 2011.

The company was established in Anguilla in 2014.

Patricia also accused the poll chief of receiving supposed commissions from a law firm that has government clients – Divina Law – as early as when he was chief of the Presidential Commission on Good Government (PCGG). Government clients supposedly include Baseco and United Coconut Planters Bank.

Lawyer Nilo Divina is supposedly one of the Comelec chief’s best friends. He is also a godfather to their eldest son Xavier.

“It would, thus, appear that Andy secured the services of Divina Law, Nilo’s law firm, in order to profit from his position in the Comelec,” Patricia said in her affidavit.

But Bautista said the law firm has no case involving the Comelec.

It is reminiscent of the track taken by the prosecutors of the late Supreme Court chief justice Renato Corona to remove him from office in 2012.

The Senate, sitting as an impeachment court, back then voted 20-3 to remove Corona from his post after he himself testified to owning dollar deposits totalling P103 million that, he said, he did not disclose in his SALN because of the confidentiality of foreign currency deposits.

The senators disagreed with his interpretation of the bank secrecy law. He was declared guilty of betraying the public trust and committing culpable violation of the Constitution, not so much for failing to explain how he amassed his wealth, but for simply failing to declare them in his SALN.

The Comelec, like the Supreme Court, is a constitutional body whose leaders may only be removed through impeachment. – Rappler.com