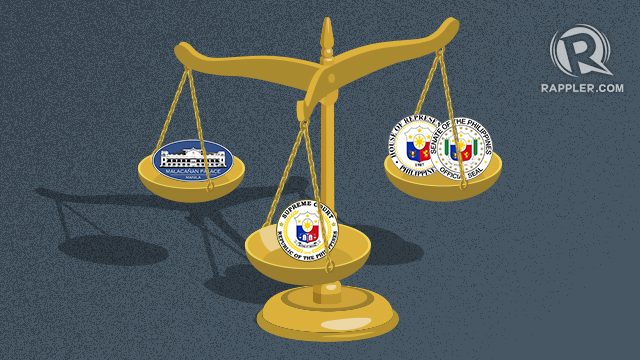 Facebook Twitter Copy URL
Copied
'If we are to stick to the rule of law, the balance of power must not be disturbed,' says Integrated Bar of the Philippines president Abdiel Fajardo on Rappler Talk

MANILA, Philippines – The balance of power among the 3 branches of government – the executive, the judiciary, and the legislative – should be maintained for rule of law to not fail further, according to Integrated Bar of the Philippines (IBP) national president Abdiel Fajardo.

“If we are to stick to the rule of law, the balance of power must not be disturbed,” Fajardo said in a Rappler Talk Investigative interview with Marites Vitug on Thursday, February 15.

The rule of law in the Philippines deteriorated significantly under the administration of President Rodrigo Duterte, according to the 2018 World Justice Project Rule of Law Index.

From 70th in 2016, the Philippines dropped 18 places down to rank 88th out of 113 countries – scoring 0.47. It also ranks 13th out of 15 countries in the East Asia & Pacific region. The report identified the country as the “biggest mover” in the latest index.

According to Fajardo, the index reflects a “great imbalance” in the branches of government and how it effectively leads to lack of check and balance.

“The balancing powers against the executive are the legislative and the judiciary,” he said. “According to the index, these two other branches are no longer effective checks on the executive department.”

The Congress has been identified as a “rubber stamp” as members align with the ideals of the Duterte administration. For instance, it has jumpstarted hearings against people deemed to be opposition.

The judiciary, meanwhile, has so far ruled in favor of Duterte’s decisions such as the hero’s burial for the late dictator Ferdinand Marcos, and martial law extension in Mindanao.

As essentially an “outsider,” Fajardo said that the IBP comes in “when all 3 government actors effectively collude.”

The role of the IBP, the largest organization of lawyers in the country, is to speak up and call for the respect of law in these trying times. Fajardo himself has consistently called for independence among government branches and the respect for law in the country.

In fact, in September 2017, he urged public officials, particularly Duterte, to not be “onion-skinned” as “a government official holds his life open to public scrutiny.”

While they may have their own advocacies, the IBP “cannot advocate for something that will distress the rule of law.”

“I think we’re just bringing back the IBP to its role, to be one of the guardians of the rule of law in the Philippines, so it’s a good thing that the current board of governors of the IBP, I would dare say, have a similar inclination towards upholding the rule of law,” he explained.

Lawyers, according to Fajardo, are essential cogs in the administration of justice. Justice means having to follow the rule of law.

“We are bound by rules to play in the field of law,” he said.

“If those rules are misapplied or not applied at all because of a certain imbalance in the balance of power, the lawyers would have difficulty addressing the justice system,” Fajardo added.

As part of their efforts to help push for accountability, the IBP has partnered with the Commission on Human Rights (CHR) to provide free legal aid to victims of human rights violations and their families. As the primary rights organization, CHR is still undermanned.

The free legal aid will include court appearances, draft pleadings, and writing of letters in behalf of the client. During the partnership’s launch in November 2017, Fajardo said that providing aid is IBP’s role to “ensure that the marginalized and the powerless sectors of society have access to justice.”

Meanwhile, in September 2017, the IBP filed administrative and criminal complaints against policemen involved in the killing of teenager Kian delos Santos.

Fajardo said that the organization had a hard time obtaining from the Philippine National Police (PNP) documents needed to aid their investigation. He recalled that they sent letters to at least 20 police stations requesting for information but were referred to the higher-ups.

The PNP leadership, however, failed to respond to the IBP’s request.

The government usually restricts access to case folders related to the drug war. In January, Solicitor General Jose Calida refused to comply with the Supreme Court order to provide full documentation of the over 3,000 deaths that occurred during police operations.

For Fajardo, providing documentation should not be hard “if these were indeed legitimate” operations.

“You must realize that if these were indeed legitimate police operations, there must be a record from the very beginning up to the end and up to the actual investigation because it’s par for the course,” he explained. “If they cannot produce it, then there must be something wrong.”

“There’s presumption in law that when evidence is suppressed, that’s not favorable,” Fajardo added. – Rappler.com