Documentary | Fake news in the Philippines: Dissecting the propaganda machine

Apr 21, 2018 12:22 PM PHT
Facebook Twitter Copy URL
Copied
In this documentary, Rappler looks into the Philippine propaganda machine – where it started and how it operates – and its chilling similarities around the world 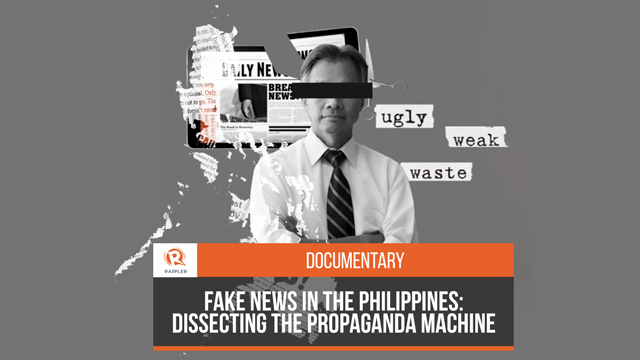 In 2016, Senator Leila de Lima found herself at the center of widespread disinformation online. Critics reveled in screenshots of her supposed sex video, news about her undeclared wealth, and allegations of her involvement in illegal drug operations in the Philippines.

Around the same time, Philippine Vice President Leni Robredo also became the constant subject of false reports. These reports include an alleged affair with another politician, a subsequent pregnancy, and an abortion.

There were similarities between the two: They were both women, have influence, and were perceived as critics of President Rodrigo Duterte. Misogynistic comments and false reports were also used and repeated over and over.

But the case is not unique to the Philippines. In fact, experts found similar patterns happening in countries around the world. They called the phenomenon “patriotic trolling”, which is targeted, state-sponsored online hate and harassment campaigns leveraged to silence and intimidate individuals.

In this documentary, Rappler looks into disinformation and propaganda in the Philippines – where they started and how they operate – and the chilling similarities around the world. – Rappler.com

Editor’s Note: A previous version of this video said that RJ Nieto hails from Davao. This has been corrected.