Duterte Dictionary: How Harry Roque interprets what the President says It often stems from an impromptu speech that carries controversial lines not quite expected from an official occupying the country’s highest government post. The controversial pronouncements often draw the ire of the public and make headlines in both foreign and local media.

As a result, Duterte’s spokespersons and apologists do their best to clarify or interpret what the President said and meant. (READ:‘Creative imagination’ under Duterte, or interpreting what he says)

These days, the task of clarifying Duterte’s statements falls on the shoulders of Presidential Spokesperson Harry Roque. The former human rights lawyer has been widely criticized for taking positions contrary to what he had advocated for before joining government. (READ: Harry Roque pirouettes for Duterte)

He told Rappler that he has “ceased to have personal opinions” as he speaks for the President now. And speak for the President he does – even to the extent of, according to critics, bending and twisting words in an effort to at least make the President’s declarations less controversial.

We review some of the most controversial statements of the President during his second year in office and how Roque valiantly tried to soften them. 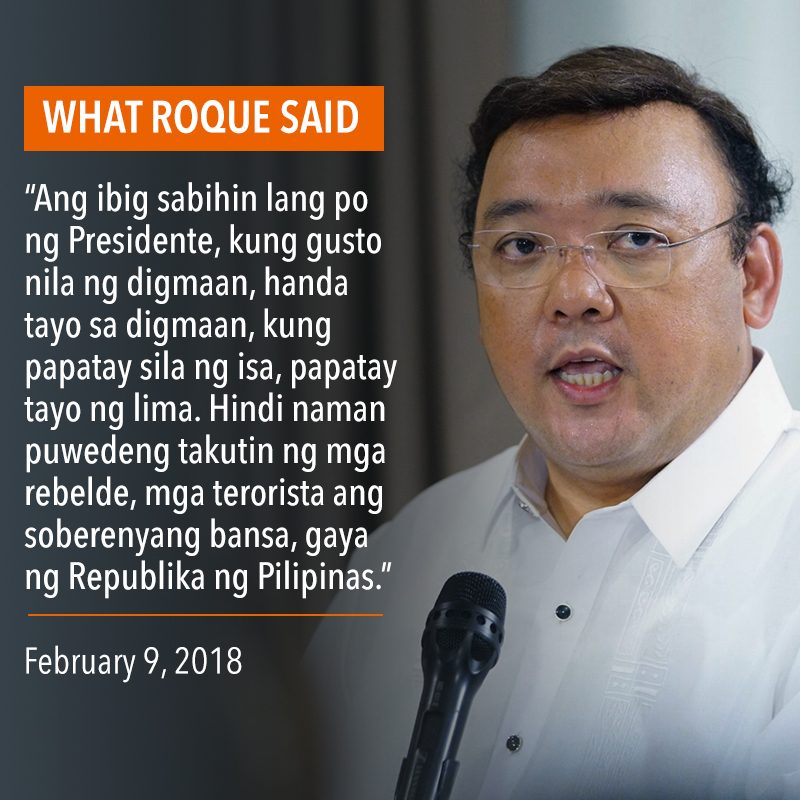 ON CHOOSING THE NEXT OMBUDSMAN ON PHILIPPINES AS CHINA’S PROVINCE ON PHILIPPINES AND CHINA ‘CO-OWNERSHIP’ ON BARTERING WITH CHINESE COAST GUARDS ON BLAMING THE AQUINO ADMINISTRATION ON ATTACKING THE JUDICIARY ON NOT GIVING JUSTICE TO DRUG WAR VICTIMS While ​the spokesperson is there to “provide clarity” to the remarks of the President, all while protecting the interest of the office, political analyst Aries Arugay warned against twisting statements too much.

“Being a spin doctor might be necessary sometimes but it should not be the primary preoccupation of Roque,” he told Rappler. “He cannot put words into the President’s mouth and analyze his remarks.”

But what would make an effective spokesperson? According to Arugay, he or she must be in sync with how the mind of the President works and with his worldview of issues.

“This is why the spokesperson must be a close aide/adviser of the President and have a sense of his mentality,” Arugay said. “It can be asked, to what extent does Roque know Duterte?”

Duterte’s previous statements about Roque show a favorable perception. Before he was formally appointed spokesperson, Duterte said: “To get the message clear, sabi ko (I said), Harry will fit – kasi medyo malikot ang bunganga namin (because we use playful language).” (READ: One month of Harry Roque as Presidential Spokesman)

This was a clear departure from Roque’s predecessor, ex-pastor Ernesto Abella, whose job performance allegedly did not sit well with Duterte.

The former presidential spokesperson, who once said the President may have been “fed the wrong information,” also urged the media to use their “creative imagination” when trying to make sense of what he says.

Unlike Abella, Roque is more outspoken and is not afraid to use strong language – a reflection of the “macho image” Duterte demonstrates in his public speeches.

Should he apologize for Duterte’s blunders? He may not because it would mean that the President himself is apologizing, according to Arugay.

But given his rhetorical style, Arugay said that the Palace should see the importance of decent communication.

“It’s important given Duterte’s propensity for off-the-cuff remarks and dislike of reading long speeches,” he said.

“Whatever the political goals, communications provide predictability, certainty, and consistency of decisions and policies for an administration that claims it wants to change the status quo,” Arugay added. – Jodesz Gavilan, Sofia Tomacruz, and Cesar Garcia/Rappler.com