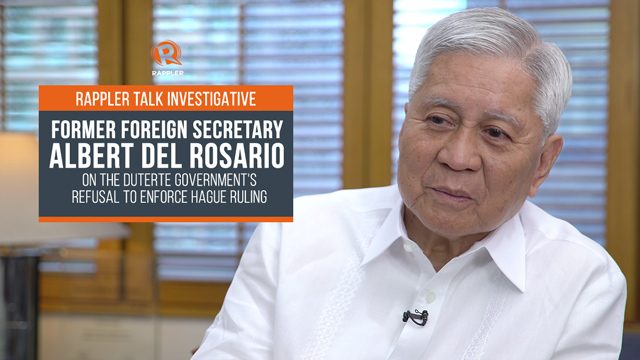 MANILA, Philippines – Two years ago, former foreign secretary Albert del Rosario did not expect that the administration of President Rodrigo Duterte would waste the Philippines’ overwhelming victory in its maritime dispute against China.

“We thought that this overwhelming victory will be welcomed by them and that we would look for a way to move it forward,” he told Rappler editor-at-large Marites Vitug. “But that was not to be.”

In his first on-cam interview since resigning from office in 2016, Del Rosario talked about the missed opportunities and losses the Philippine government would have to endure if this continues. (READ: 2 years after winning, Duterte refuses to enforce Hague ruling)

The Duterte administration, for its part, justifies its refusal to enforce the ruling by citing the economic benefits from China. By doing so, the President is overlooking China’s transgressions, including the harassment of Filipino fishermen, among others.

But according to Del Rosario, there are “many other avenues” the government could pursue if it is serious in its assertion of sovereign rights, among others.

“Are we giving up our patrimony for future generations simply because we don’t want to deal with this outcome?” Del Rosario asked. “We need to revisit that strategy and we need to do something quickly and it’s not like we don’t have avenues to pursue to change our approach.”