Sep 29, 2018 12:22 PM PHT
Rappler.com
Facebook Twitter Copy URL
Copied
The Newsbreak team discusses on Thursday, September 27, the arrest of Senator Antonio Trillanes IV and its effect on the military, rule of law, and the opposition 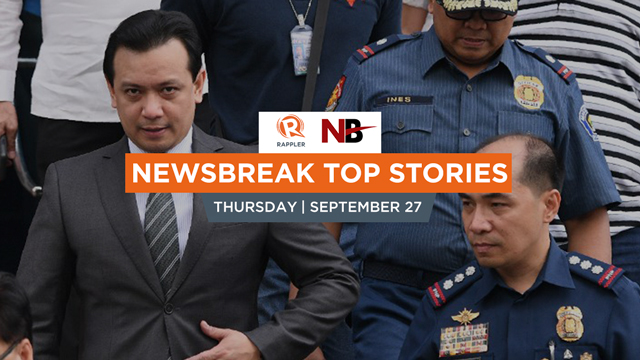 Bookmark this page to watch and join the discussion live on Thursday, September 27, at 4 pm!

MANILA, Philippines – The month of September comes to a near end with Senator Antonio Trillanes IV becoming the second opposition legislator arrested under the Duterte administration.

His arrest on Tuesday, September 25, was the latest development in the events stemming from President Rodrigo Duterte’s issuance of Proclamation No. 572, which sought to revoke the amnesty granted to Trillanes in connection with the 2003 Oakwood mutiny and the 2007 Manila Peninsula siege. (TIMELINE: Trillanes, from mutiny to amnesty)

The Newsbreak team on Thursday, September 27, sits down to discuss the controversy and its effect on the military, rule of law, and the opposition.

Rights groups see Trillanes’ arrest as part of Duterte’s crackdown on his vocal critics. Legal experts also said that it is a dangerous precedent, particularly to many individuals from the military who were granted amnesty in the past.

Join us as we make sense of the developments, how they impact the public, and what to expect in the coming months.

Let us know in the comments below or tag us on Twitter (@newsbreakph) if you have any questions! Don’t forget to join Thursday’s discussion with more comments and suggestions. – Rappler.com