Feb 4, 2019 4:57 PM PHT
Facebook Twitter Copy URL
Copied
For some LGBT leaders in Tondo, public service is the only way to gain acceptance and respect

MANILA, Philippines – Saturday morning, February 1, was like any other for most residents around Barangay 118 in Tondo, Manila. Early on, the streets crackled with the run-of-the-mill rumble of people going about their daily business: jeepneys zooming through the crowded streets, tricycles revving up their engines, throngs of people speaking to (or over) each other.

But for the senior citizens here, that morning was a bit more exciting than usual.

An event called the Senior Citizen Salon Caravan was being held in Rawis, where a makeshift salon was set up offering free haircut, coloring, and hot oil services especially for the seniors. More than a makeover, blood pressure readings, free maintenance medicines, and free breakfast were offered.

But the hairdressers in this case weren’t regular beauticians. They called themselves the “kagaywads” (gay barangay councilors) – a group of barangay councilors or kagawads in Manila’s District 1 who are also lesbian, gay, bisexual, and transgender (LGBTs).

At 9 am, it was a scene typical of most hair salons in the Philippines: clients putting their beauty in the hands of trusty cosmetologists – usually women or gay men. 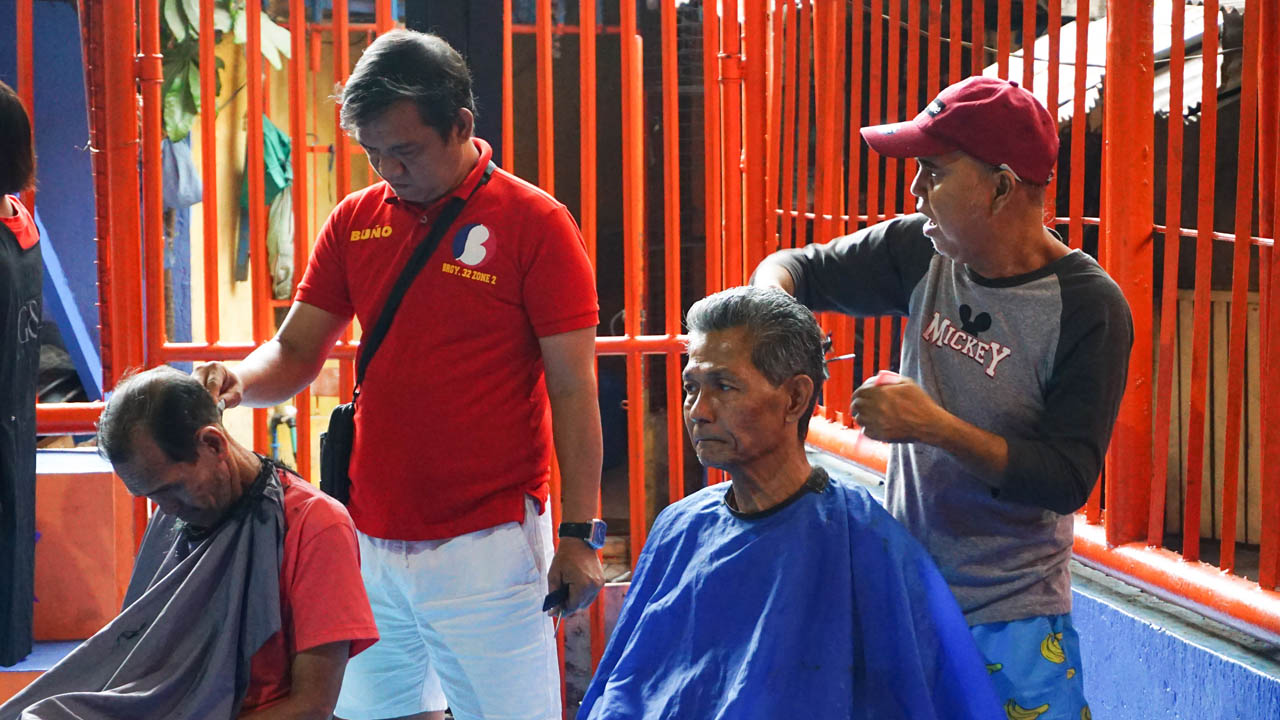 It was the kagaywads who set up the “Senior Citizen Salon Caravan,” but it was one kagawad who came up with the idea: AJ Cecilio of Barangay 35, Zone 3, in Tondo.

Together the kagaywads may just be the key to the advancement of LGBT rights in their own community. Politicians who are LGBT allies have their support, AJ said.

For many of the kagaywads, entering public service was their way of showing their community what LGBTs can do. And, as many of them said, it was also their way of earning the respect so often denied LGBTs.

(This is why we support a councilor who will be our ally. We have output that they can discuss in sessions, at the city council. We’ve laid out possible policies that can strengthen us.)

(There’s a lot of us. That’s a big deal. People are surprised when we meet them, especially when we are introduced as kagawads. They are surprised that there are so many of us.)

Meet the kagaywads of District 1: 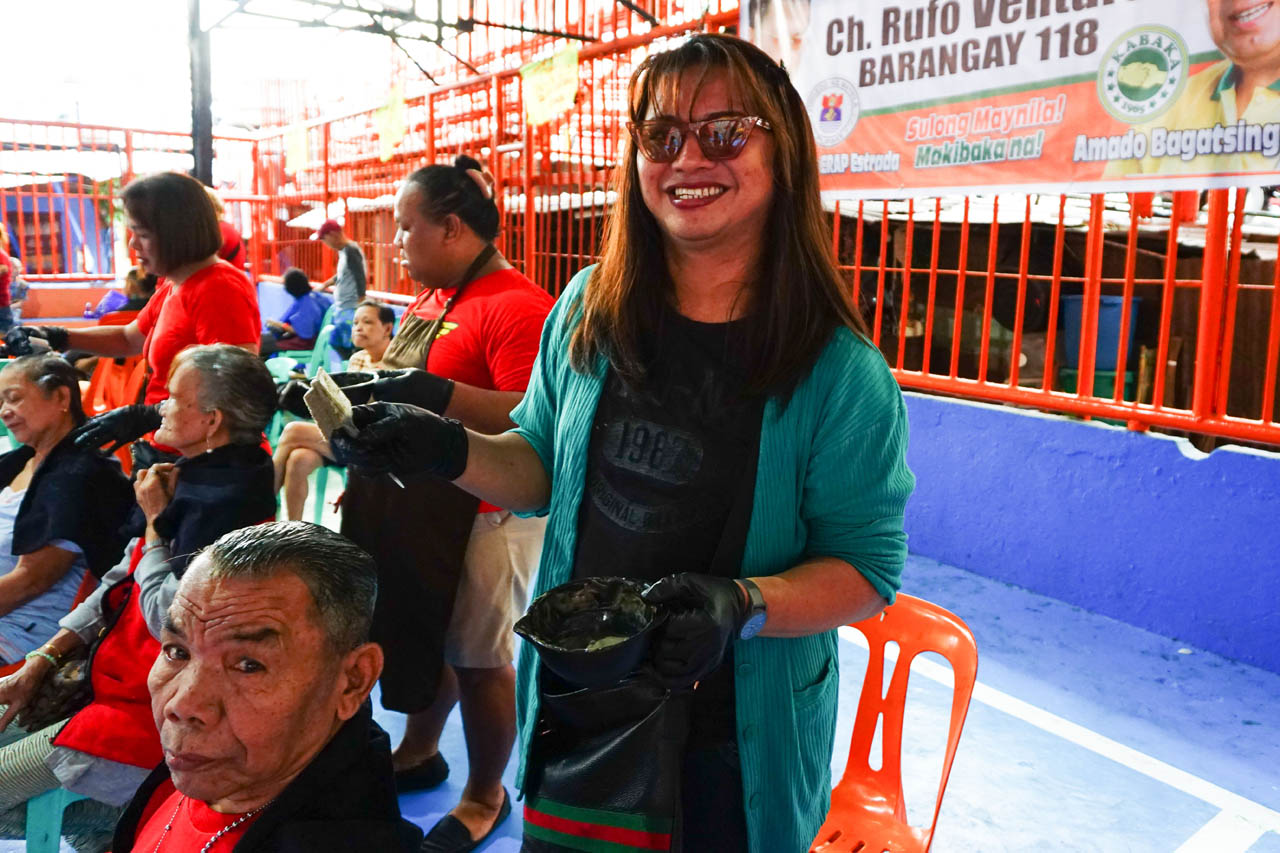 AJ has never met a challenge she couldn’t overcome – which is perhaps why when this woman speaks, people listen.

AJ lived most of her life as a gay man. In Tondo, that meant having to learn how to fight back against bullies in order not to get bullied. It was when she was in her 40s that AJ learned what “transgender” meant, and only then did she finally find the phrase that she could properly identify with: “transgender woman.”

Struggling with her identity wasn’t easy, and AJ has faced more than her fair share of difficulties – but not enough to discourage her to lead.

AJ first became a kagawad in 2007, and served for two terms before running for barangay chairman, getting the second highest number of votes. She then served as the winning chairman’s secretary.

Beyond politics, she led Transmanilenya, a support group for transgender women in Tondo.

In 2018, AJ campaigned to be kagawad again, and even went house to house to attempt to win votes. The effort proved worth it when she was voted as Barangay 35, Zone 3’s number 1 Kagawad.

Aside from coming up with the idea to offer free salon services, AJ, along with the other kagaywads, champions HIV awareness in her community, leading by example to encourage regular HIV testing.

AJ said that she no longer experienced discrimination during her last campaign. She added that while there are some who still discriminate against them, for the most part, their community has grown to be very accepting of LGBTs.

By AJ’s account, it was an acceptance they had to earn.

(Instead of bullying us, they would feel embarrassed. There’s a saying that goes “kill them with kindness.” That’s what we did. While they discriminated against us, we worked, we served the people.) 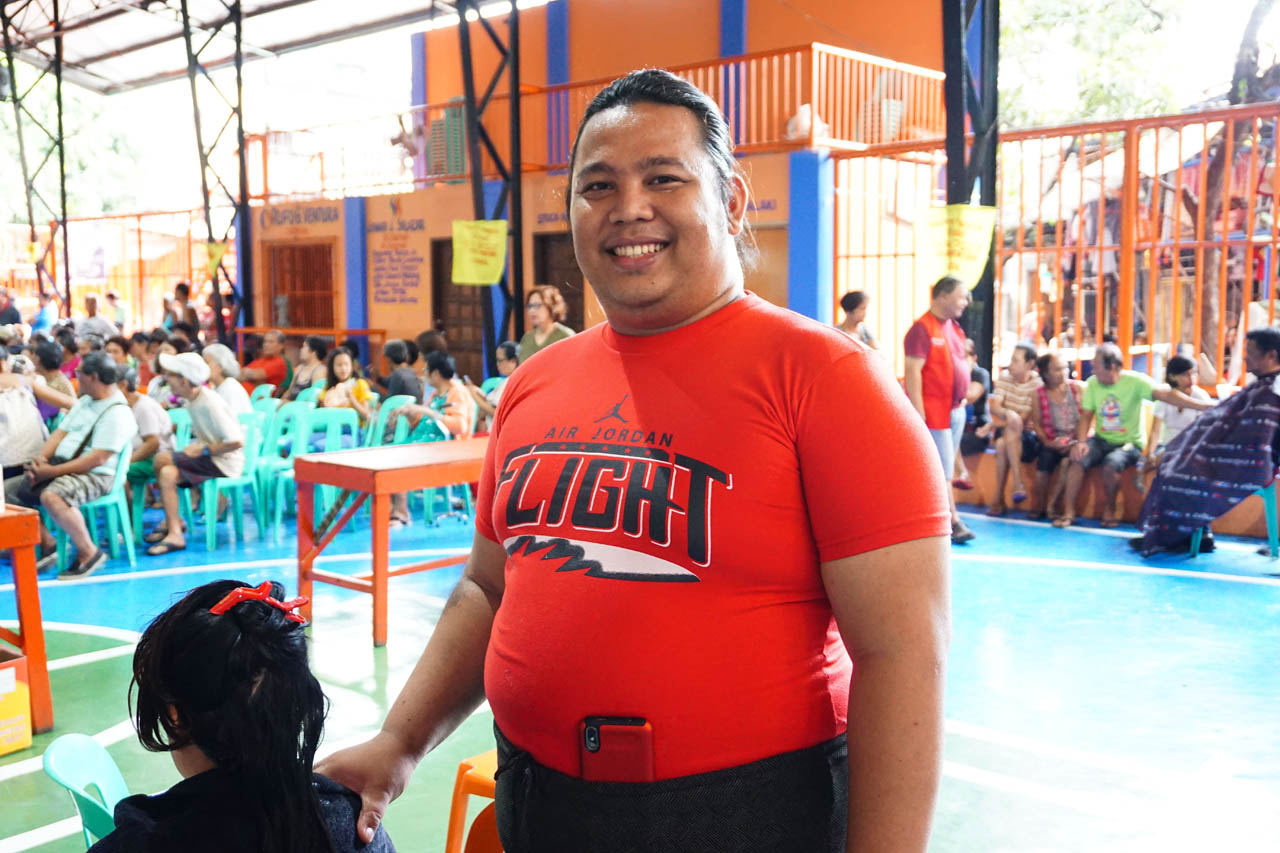 Arvin is the officer-in-charge at the Barangay Council for the Protection of Children (BCPC) in Tondo’s barangay 128 – better known as Smokey Mountain. He’s new to the kagaywads – the others have known each other for quite some time, he said – but was one of those invited to help the group make their projects a reality.

Arvin said that he focuses on child safety because he was a beneficiary of a non-governmental organization in Tondo himself, one that promotes children’s rights.

He’s gone through two different chairmen and has been 12 years in his position, but Arvin still talks about his job with passion.

(Now, what we’re focusing on is cyber safety because usually what’s trending now is online sexual abuse, so we teach cyber safety so the kids [can learn] the right way to use computers so they are not harmed by online strangers.)

Aside from cyber safety, Arvin has also worked on projects about children’s rights, child labor, and positive discipline. 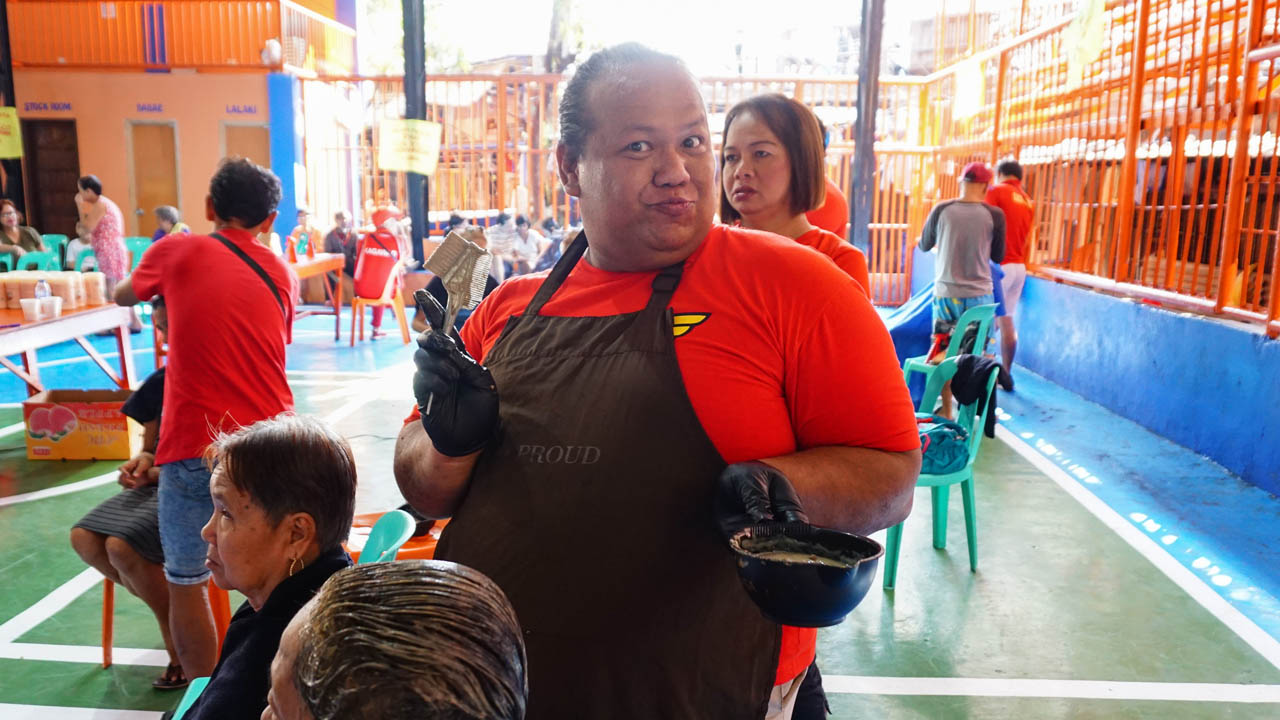 Glen did not think he would run for kagawad. But when he ran in 2018, campaigning door to door to meet his would-be constituents of Barangay 71, he won.

“First time kong tumakbo…Siguro kaya rin nanalo dahil sa dami ng kaibigan,” he said. (It was my first time to run as councilor…Maybe I won because I had many friends in the community).

He didn’t think he’d win because he’d always been a parlorista. It was the only public service he knew then. Even at the salon caravan, he explained why the parlor service was so important to senior citizens.

As many as 200 seniors had lined up since Wednesay, January 30, when the kagaywads started the mobile salon. Many of them asked for dark brown hair.

Now that he’s a barangay official, not only does he serve using his parlor expertise, he is also involved in health and youth programs. 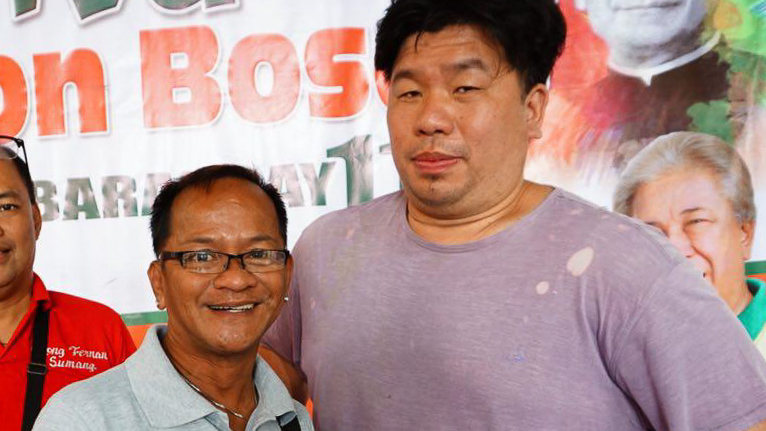 Rei (left) has had many odd jobs throughout his life – he was once a parlorista and a lugaw (porridge) vendor – but getting into public service was the one thing he really wanted.

He first campaigned to become a barangay official in 2010, and 9 years on, he hasn’t looked back. What drives him, he said, is his love for his community.

Rei’s advocacies include education for the youth and support for senior citizens.

He said that his life changed drastically since he became a kagawad, not only because he was able to help out the community he loves, but also because he met a lot of different people and learned new things. Because of this, he said he would never tire of helping his community.

Rei has been a barangay official for so long that he no longer feels the discrimination against LGBTs, at least within his barangay. But before he entered public service, he did face doubters.

As it turned out, winning his campaign also meant winning over those who didn’t think he could do it.

“Natuwa sila sa kabila ng lahat dahil ‘yung mga akala nila, hindi ko kaya. ‘Yun pala mas lalo pa silang natuwa dahil mas napamahal sila sa akin,” Rei said. (They were happy inspite of everything because they thought I wouldn’t be able to do it. Those who thought I couldn’t do it became the ones who were happiest for me because they endeared themselves more to me.) 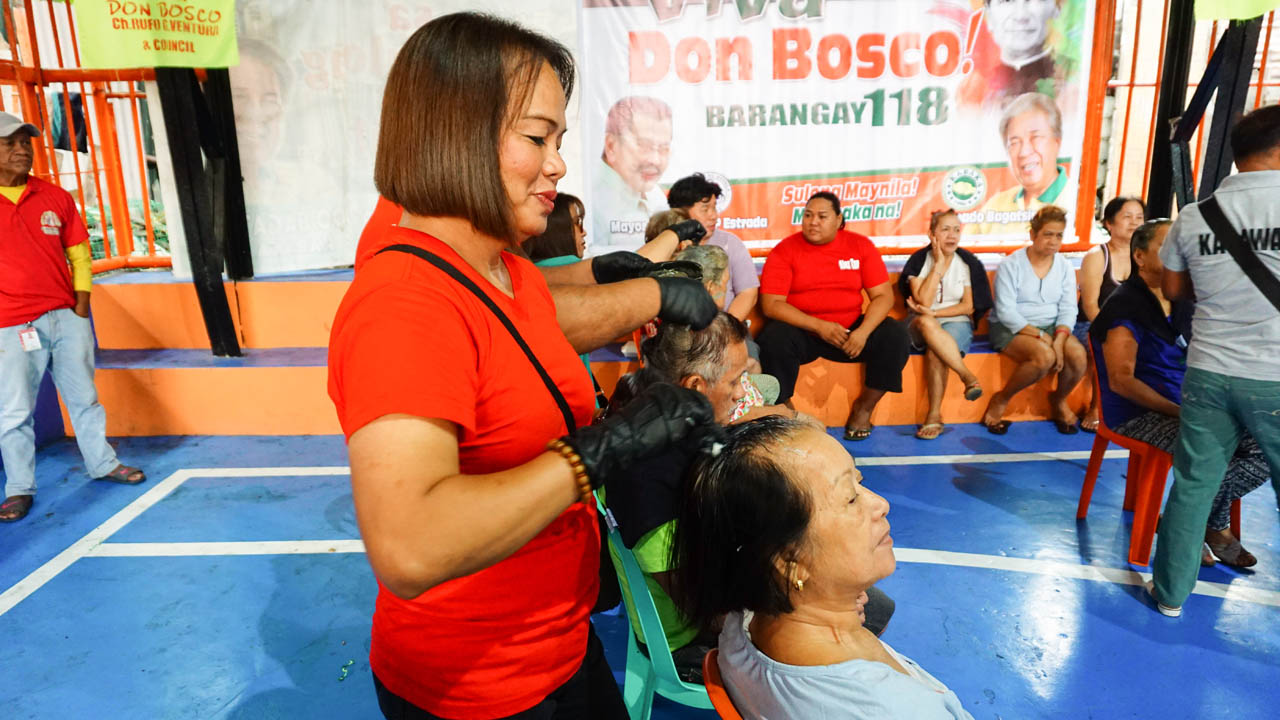 Marie is a parlorista. She used to run her own salon along Concha Street but now does private appointments.

Like AJ, Marie identifies as a transgender woman. Unlike the rest of the kagaywads at the salon caravan, she has seen much more of the world beyond Tondo. Marie used to work as a dancer in Japan.

“Noong college undergrad ako sa PUP (Polytechnic University of the Philippines) – mga 20 [years old ako noon] – nag-audition ako as an entertainer sa Japan, kasi noon hindi masyadong mahigpit,” she narrated. (When I was a college undergraduate at PUP – I must’ve been 20 years old then – I auditioned to be an entertainer in Japan; they weren’t as strict then.)

She explained that Japanese clients would take a look at them and when these clients approved, Marie and her companions would go to Japan and stay for 6 months at a time. In total, she has spent 3.5 years in Japan; she calls herself a “7-timer.”

But now, Marie is back and has found being a gay kagawad her calling – “siguro by destiny (maybe it was by destiny).” She said service begets respect, and as a member of the LGBT community, respect is something she really wants.

“Dati talaga hindi kami nirerespeto…[Noong] naging secretary ako sa barangay, marami [akong] natulungan, umangat nang konti,” she said. (They didn’t respect us at all before. Then I became barangay secretary and was able to help a lot of people; things got better then.)

Some of the kagaywads in the mobile salon had known each other since childhood. Some of them had just met through programs like this.

Marie told us, “Lahat kaming mga beki, kapag nagtagpo…hindi kami magkakilala pero ‘pag nagkita kami akala mo matagal na kaming magkakilala.” (Gays, whenever we meet, we may not know each other but you’d think we’d known each other for a long time).