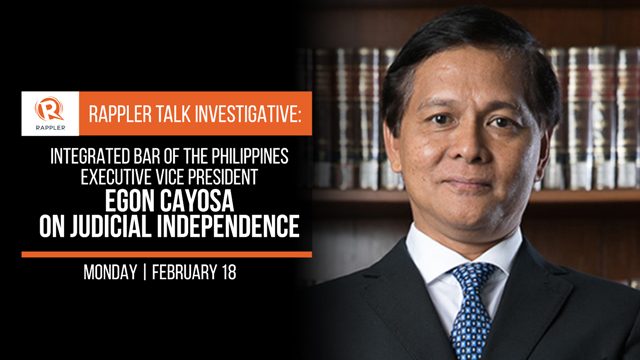 MANILA, Philippines – The judicial branch of government is a crucial part of any democracy as it plays a role in the system of checks and balances.

In the Philippines, the 1987 Constitution sets the judiciary as a coequal of the two other branches of government – the executive and the legislative. But various instances have led to questions on the independence of the judiciary.

On Monday, February 18, Integrated Bar of the Philippines (IBP) executive vice president Egon Cayosa sits down with Rappler editor-at-large Marites Vitug to discuss the issues surrounding the judiciary, including the quest to uphold its independence and the resolution of cases, among others.

Cayosa is also the incoming president of the IBP, the Philippines’ largest organization of lawyers.

What can the IBP do to address delays in court cases? What challenges are prosecutors, lawyers, and other members of the judiciary facing amid what has been described as a culture of impunity?