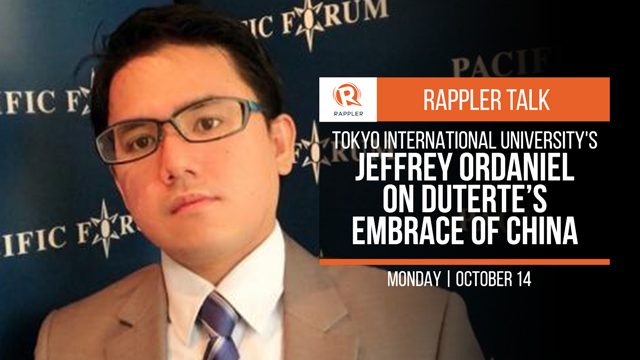 Bookmark this page to catch the interview live on Monday, October 14, at 2 pm

MANILA, Philippines – It has been more than 3 years since what was once a tense relationship between the Philippines and China turned cordial under President Rodrigo Duterte.

But many have criticized Duterte’s embrace of the powerful country, pointing out how he has also compromised the Philippines’ stand on several issues, including the West Philippine Sea. (READ: Philippines loses to China 3 years after Hague ruling)

A fellow of TIU’s Institute for International Strategy, Ordaniel has worked on projects about Southeast Asia, particularly on regionalism and maritime security.

Watch the discussion live on Monday, October 14, at 2 pm! – Rappler.com