Jun 9, 2020 7:17 PM PHT
Rappler.com
Facebook Twitter Copy URL
Copied
With the youth and students at the forefront of speaking truth to power, how are they dealing with the threat of the pending anti-terror bill? 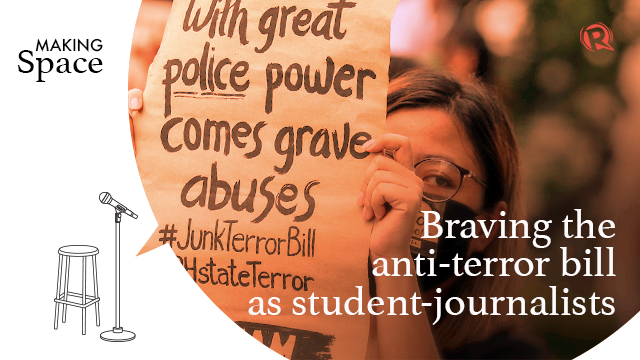 MANILA, Philippines – “A part of me was still doubting if that really happened. My knees were still trembling, knowing my friends were captured and I was not able to do anything.”

This is how a campus journalist described what it was like to cover the peaceful protest at the University of the Philippines (UP) Cebu that ended with law enforcers storming the campus and arresting 8 people. (READ: U.P. Cebu to probe whether cops violated U.P.-DND accord in arrest of protesters)

The students mobilized on Friday, June 5, to protest the proposed Anti-Terrorism Act of 2020, which now only awaits the President’s signature. Human rights advocates have warned that the government could use the law to stifle dissent and conduct surveil critics. (READ: EXPLAINER: Comparing dangers in old law and anti-terror bill)

Following the protest, dummy accounts of youth activists in Cebu and then students across the country emerged on Facebook. Some of these ghost accounts even reportedly sent threats to the accounts they had duplicated. (READ: Lawmakers fear fake Facebook accounts meant for ‘online tanim-ebidensya’)

Even before Congress passed the anti-terrorism bill, red-tagging had been a constant threat towards young activists, student-journalists, and even their friends and families. The alarm being raised by human rights lawyers and advocates is: what more could happen if this new law with loose, if non-existent, safeguards is enforced by state forces who have been calling activists terrorists?

In this episode of Making Space, Michelle Abad speaks to the editors in chief of two university student publications: Mel Joseph Castro of UP Cebu’s Tug-ani, and Klenia Mendiola of Holy Angel University’s The Angelite.

Mel witnessed the events of Friday’s protest, and Tug-ani was the first to report on the emergence of dummy accounts. Meanwhile, Klenia experienced being red-tagged along with her associate editor, whose parents were visited by the government’s anti-communist task force.

Schools have an important role in creating a conducive environment for criticism while still protecting their students, according to Mel. He said one way is creating a group in charge of protecting and monitoring possible attacks against students.

Klenia said schools should be safe spaces for academic freedom, and they should be allowing students to apply what they have learned about society outside the 4 walls of the classroom.

Mel and Klenia call on fellow student journalists to stay brave and vigilant in speaking truth to power.

Making Space is Rappler’s podcast on gender, health, education, social services, and everything in between. Listen to other episodes of Making Space on this page.