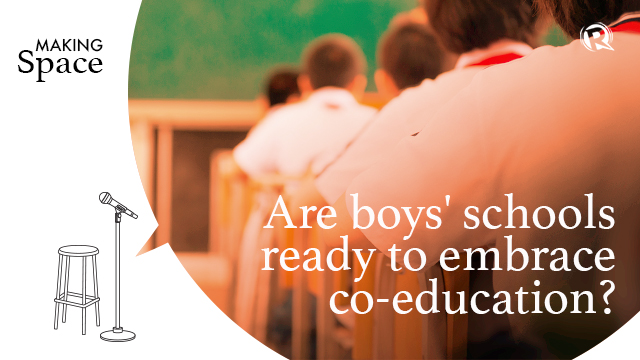 MANILA, Philippines – When a perpetual locker room opens up, questions are raised when territorial boys say having girls around will threaten their traditions and end their “glory days.”

Exclusive schools around the Philippines are growing to welcome new genders – especially as they open up senior high school units. Ateneo High School went ahead in 2016, and this coming school year, La Salle Green Hills is getting on the co-education wagon, too.

Saab and Sean didn’t mince words as they came clean about the stereotypes against LSGH boys which they say hold some truth – “rowdy,” “loud,” “physically dominant,” and with the tendency to “oversexualize” things. Anything “non-masculine” was frowned upon – even crying.

They were irked by what Brother Edmundo Fernandez, president of LSGH, said in an interview with Inquirer.net on what preparations were needed to transition to co-ed: “Physical lang eh, like some of our toilets. Our curriculum remains the same. Maybe we’ll just have to look into physical education. We do have programs that are not typically for boys. We have cooking. We offer practical work like sewing, how to sew buttons back onto your shirts.”

Fernandez also mentioned that a co-ed setup would help with the “holistic formation of the boys.” Saab and Sean agreed that girls shouldn’t be tools for boys to develop themselves.

When Bea entered ASHS, she recalled how there was an invisible line that physically separated the boys from the girls. Handbooks still said that Ateneo students were to be “men for others.”

Jb and Bea said they had pleasant experiences in the pilot years for co-education in ASHS, but they worry that girls will have to go through dangerous or even abusive encounters that were a result of the school not moving fast enough to truly accommodate them.

Bea said schools should help not just the students to adapt, but also the parents, teachers, guidance counselors, and administrators in creating systems that identify with women and girls to create safe spaces.

The boys call on other boys who feel threatened by co-education – what exactly is lost once girls step foot in the school?

If these “traditions” suddenly become unacceptable when a girl is around, then perhaps it is time to rethink why we value them, they said. – Rappler.com

Making Space is Rappler’s podcast on gender, health, education, social services, and everything in between. Listen to other episodes of Making Space on this page.