Why Holy Week has no fixed dates 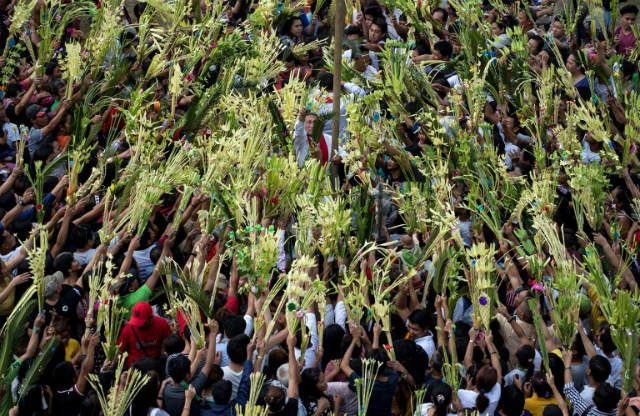 Editor’s Note: This piece was originally published in April 2014. Rappler is updating and republishing this to mark Holy Week 2018.

Since 1582, Holy Week has started as early as March 22, and has ended as late as the last weeks of April. The dates of the Holy Week differ each year due to the celebration of Easter, which marks the resurrection of Jesus Christ.

Easter is one of the Catholic liturgical calendar’s “movable feasts,” or celebrations that do not have a fixed date on the Gregorian calendar. Wherever Easter Sunday is on the calendar, the 6 days that precede it make up the Holy Week.

Why then does Easter Sunday move around? Easter is movable since it depends on the observance of the Jewish Passover.

The dates of Jewish feasts are movable due to the Jews’ lunisolar liturgical calendar, which follows both lunar and solar cycles in contrast to the regular solar calendar.

There are at least two reasons for these dates: (1) Jesus’ passion, death, and resurrection occurred on the Passover, and (2) the events that lead up to Easter were believed to have happened on the 14th of Nisan.

However, early Christians did not observe Easter simultaneously, with arguments on the “real” date of Easter erupting among dioceses. In 325 AD, the Council of Nicaea decreed that there must be uniform dates for Easter observances, and that the dates must not coincide with the Jewish Passover. There were two reasons for this.

First, the early Church wanted to be separate from Judaism. Anti-Jewish sentiments were growing among Early Christians, who wished Easter to have nothing to do with the people they saw as “murderers of the Lord” for giving Jesus to the Romans for death.

Second, the Jewish calendar confused the heads of early churches. Passover itself is a movable Jewish feast, which means the 14th of Nisan often did not coincide with the spring equinox and the first vernal (meaning spring) full moon.

Through their calculation of calendars and the fact that Passover begins in full moon of the spring equinox, the early Church believes that Jesus was resurrected on the first vernal full moon.

Therefore, to avoid Passover and to coincide with what was believed to be the day of Jesus’ resurrection, the council agreed that Easter is to be uniformly celebrated on a Sunday after the first vernal full moon after the day of the Jewish Passover.

Church mathematicians and astronomers took great pains to set the Easter Sunday of every year. This led to the practice of Computus, the computation for Easter dates.

There were many computations in the Catholic Church’s history, but the current computus in use was commissioned by Pope Gregory XIII in 1582.

Through the Gregorian Computus, it is possible to know the date of any year’s Easter Sunday, which is always on a date after March 20, with the 6 days preceding days marking the Holy Week.

The Gregorian Computus, however, is not perfect, as some Easter Sundays coincide with the Passover.

There have been 8 Easters that have coincided with the Passover so far, with the next one occurring on the Easter Sunday of 2183. – Rappler.com