May 24, 2014 9:06 AM PHT
Reynaldo Santos Jr
Facebook Twitter Copy URL
Copied
Among incumbent senators, Guingona records the highest increase in net worth in 2013 – more than double the amount of his 2012 net worth 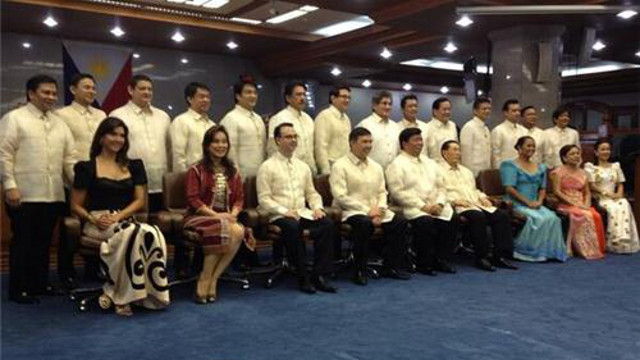 MANILA, Philippines – Among incumbent senators, Senator Teofisto “TG” Guingona III gained the most in terms of wealth in 2013 – more than double what he had in 2012.

Based on the Statements of Assets, Liabilities, and Net Worth (SALNs) obtained by Rappler from the Office of the Senate Secretary, Guingona’s total wealth declaration jumped from P43.5 million in 2012 to P114.95 million in 2013.

Added entries in his 2013 SALN like “condominium unit w/ parking-subject of contract to sell” and “advances from stockholders” also contributed to the increase in the value of his personal properties. His liabilities also jumped from P68.21 million in 2012 to P107.73 million in 2013.

Aside from Guingona, 10 other incumbent senators became wealthier in 2013 compared to 2012.

We looked at the SALNs of 20 sitting senators who were part of both the 15th and 16th Congresses, and found that most of them increased their net worth, too.

Senator Francis Escudero, who had the lowest net worth among senators in 2012, doubled his net worth in 2013. Yet he remains among those with the lowest wealth declarations in the Senate in 2013, next only to Senator Antonio Trillanes IV.

Senator Loren Legarda had the biggest drop in net worth due to a decrease in her cash assets – from P6.89 million in 2012 to P2.36 million in 2013. She sought reelection to the Senate in the 2013 mid-term elections and also ran for vice president in 2010 as guest candidate of the Nacionalista Party (NP). She was the runningmate of the NP’s presidential candidate then, Manuel “Manny” Villar.

Excluded in the comparisons are senators Bam Aquino, Nancy Binay, Grace Poe (all first-time legislators), and Cynthia Villar, who is on her first term as senator. She was elected to the 14th Congress, however, serving from 2007-2010.

Villar has the highest net worth among the current senators, and is the only senator to have reached a billion-peso mark in wealth declaration. In her last SALN declaration in 2009, her net worth hit P947.88 million – also the highest that year among representatives in Congress.

Her husband Manny Villar, president of the NP, posted about P1.45 billion in net worth for 2012, also the highest among senators that year. Manny Villar first became congressman in 1992, representing Las Piñas and Muntinlupa, and then became Speaker in 1998. He was elected to the Senate in 2001 and became Senate president in 2006. He sought the presidency in 2010, spent a lot on his candidacy, but quickly recovered expenses. The Villars are known to have made their fortune in the real estate business.

The deadline for filing of the annual SALN is every April 30. All senators were able to submit their documents at the Office of the Senate Secretary on time, based on the receive stamps in each SALN document.

Among the 3 senators who were charged with plunder due to their alleged involvement in the pork barrel scam, Senators Jinggoy Estrada and Juan Ponce Enrile declared a higher net worth in 2013. Senator Ramon “Bong” Revilla Jr reported a decrease in wealth.

In late 2013, there were reports of Estrada building a P120-million house in Wack-Wack subdivision in Mandaluyong. This property is not reflected, however, in his 2013 SALN declaration.

Revilla’s net worth, on the other hand, decreased by more than P2 million due to the decreased value of his personal properties (particularly in the value of his investments, cash, and receivables) from P171.94 million in 2012 to P151.51 million in 2013. Like his friend Jinggoy, Revilla was also reported to be constructing a new multi-million-peso house across his present one in Ayala Alabang. This new property, however, is not reflected in his latest SALN declaration.

It was on September 16, 2013 when the Department of Justice filed plunder charges against Revilla Estrada, and Enrile after they were found to have the biggest amount of alleged illegally diverted funds from their pork barrel to fake non-governmental organizations associated with Janet Napoles, the supposed mastermind of the pork barrel scam.

The latest SALN submissions come two years after the Senate, convened as an impeachment court in May 2012, voted 20-3 to convict former Supreme Court justice Renato Corona for his failure to truthfully disclose to the public his SALN. The upheaval that his impeachment caused called attention to the importance of an accurate reporting of SALNs. – Rappler.com