Corona’s dollars in 1960’s have issues

May 27, 2012 2:26 PM PHT
Facebook Twitter Copy URL
Copied
He was a student then and the "black market" for dollars was not allowed MANILA, Philippines – There are two issues in Chief Justice Renato Corona’s claim that he acquired dollar-denominated investments in the 1960’s: he was a student then and the “black market” for dollars was not allowed under the monetary policy environment at the time.

When Corona took the witness stand at his impeachment trial for the second time on Friday, May 25, he reiterated his explanation last May 22 that he and his wife started investing in dollar accounts decades ago, enjoying windfalls when the peso grew weaker against the greenback.

Corona was explaining to the senator-judges that he parked a major portion of his wealth in investments that could be easily converted into cash — P80 million in peso accounts and $2.4 million in dollar accounts — largely due to his and his loved one’s health-related issues.

In particular, he stressed that he chose to park most of his liquid assets in dollar-denominated investments — not because these are covered by banking secrecy laws, as alleged by the prosecution lawyers — but because he had long acquired and profited from them.

His account of when he exactly acquired these dollar assets, now worth multi-million, came in trickles. On May 22 and 25, he reiterated that he started investing in dollars in the 1960’s. On his second day at the witness stand, he expounded that he merely traded with his friends the dollars, then a restricted currency, that were not returned to the central bank.

To former Monetary Board official and veteran banker Vicente B. Valdepenas, Corona engaged in “black market” operations, which are illegal.

Also remaining unanswered is how he could set aside funds big enough to grow to a multi-million portfolio since, based on the Supreme Court website, he was still a college student then.

Corona told the impeachment court on May 22 that he and his wife began investing their savings in foreign-denominated accounts in the 1968, when the peso-dollar exchange was at P2 peso for every $1. (Current ratio is around P43 to $1.)

“I was earning well that time, especially when I became a lawyer. We converted all our savings into US dollars,” he narrated.

Corona finished college in 1970, which means he was still a student in the 1960s. After graduating, he held a full-time job in the office of the Executive Secretary in Malacañang while taking up evening classes at the Ateneo Law, according to the Supreme Court web site.

He has likewise said that he even had to take a student loan to be able to go to Harvard for his masters.

“Our decision to invest in dollars paid off since the exchange rate has since increased almost 7 times,” he said in the vernacular. He cited how the peso-dollar exchange rate shot up to 6:1 after the 1969 presidential elections, when the peso currency devalued.

On May 25, the second time Corona took the witness stand, Sen. Frank Drilon pressed further how and when he started depositing his dollars in bank accounts.

Corona replied, “around 1972 or ’73,” then cited the restrictions in opening of bank accounts for dollar funds before a Monetary Board Circular 343 allowed it, and before the Foreign Currency Deposit Act was passed not long after.

The chief justice’s succeeding accounts gave a hint that he was engaged in black market activities of the restricted currency.

“At the time, the businessmen…those who were earning dollars from their businesses have to surrender their dollars. But the ordinary people…[those] who travelled abroad didn’t surrender excess dollars anymore. So if someone needed dollars, [we said] ‘Do you want to buy, here buy ours’,” Corona narrated in Filipino.

In the 1960s, free trade of the dollar currency was restricted by the central bank. He and his friends were supposed to surrender their excess foreign currencies upon their return to the country to the central bank, which was strict in limiting dollars held by citizens.

From 1949 to 1970, the central bank controlled the dollars held by Filipinos since the government wanted “to promote exports industries” and “limit imports,” according to a paper from the central bank explaining the evolution of monetary policy in the country.

The existence of parallel or “black markets,” particularly for US dollars, hurt this policy since it distorts the true picture of foreign exchange demand, supply, and price. 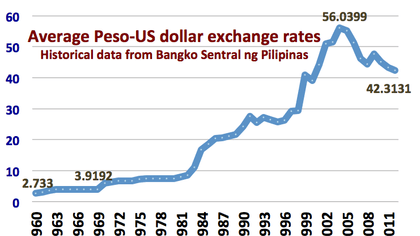 The monetary policy environment in the 1960’s restricted the free buying and selling of dollars since the country was under a “legislated rate” regime, explained lawyer Reynaldo Geronimo who has helped craft banking and investment laws.

There was an absence then of a gold standard, which dictated the supply, demand, as well as the value of the currencies in the country, Geronimo said.

At the time, most central banks could only sell dollars to its citizens based on the value of the physical gold that they had in their vaults. Thus, the Philippine central bank, in an effort to control inflation, had a tight grip on the supply, demand, as well as the price, of gold and dollars.

Part of these efforts was to legislate or peg the value of the peso against the dollar at 2:1.

“During those days, you cannot buy dollars just because you want to. There has to be a special reason, such as businessmen going for a trip abroad. You need allowance but you need to prove it. If you are studying abroad, you have to present admission documents, tuition fees, etcetera,” Geronimo explained.

The fixed exchange rate regime involved “an extensive use of a myriad of administrative rules that were set to restrict access of Philippine residents and corporations to foreign currency,” the Bangko Sentral ng Pilipinas further explained in its paper.

In 1974, however, the tight lid on the exchange rate was relaxed as part of efforts to attract foreign investors and kick-start growth of the fledging economy.

By passing the Foreign Currency Deposit Act (FCDA), there was a “legal stature” to a previous circular issued by the Central Bank’s policy making body that had temporarily transformed the peso-dollar exchange rate regime from a fixed to a floating or market-driven one.

Given the foreign investment-driven nature of the FCDA, the lawmakers then added the now-contentious secrecy provision.

Corona had cited the FCDA’s secrecy provision for not including the balances of his dollar accounts — which now stands at $2.4 million, according to him when he testified on May 25 — in his Statement of Assets, Liabilities and Networth (SALN).

A key complaint for impeaching him is his failure to disclose his true wealth in his SALNs.

Geronimo reiterated that the FCDA was meant to attract foreign investors, and not to be an investment tool for citizens.

“Foreigners then were given this assurance of absolute secrecy since we were encouraging them to bring their money and park their dollars here. The FCDA [was passed] not to protect public officials who want to hide their money in dollar accounts,” explained Geronimo who has helped in crafting several banking and investment laws.

However, it was not until decades later that the BSP eased all other restrictions in foreign exchange-related activities.

The BSP paper further explained that “Even after the floating rate system was adopted in 1970, it was not until late 1984 that the central bank stopped announcing a guiding rate and imposing a trading band…It was a decade hence yet before the watershed set of reforms was issued. In 1993, the BSP liberalized capital flows and implemented a comprehensive set of foreign exchange market reforms.”

On May 25, after over 4 months into his impeachment trial, Corona signed a waiver allowing access to his bank accounts, including his dollar-denominated ones.

He reiterated that he only has $2.4 million in his 4 dollar accounts — not $10 million in 82 accounts, as Ombudsman Conchita Morales earlier told the senator-judges.

How much he has in his bank accounts, however, is just a part of the main question: Should these have been disclosed in his SALNs? – Rappler.com

Click on the links below for more stories on Corona’s dollars.