Who are the lawyers of Janet Lim Napoles? 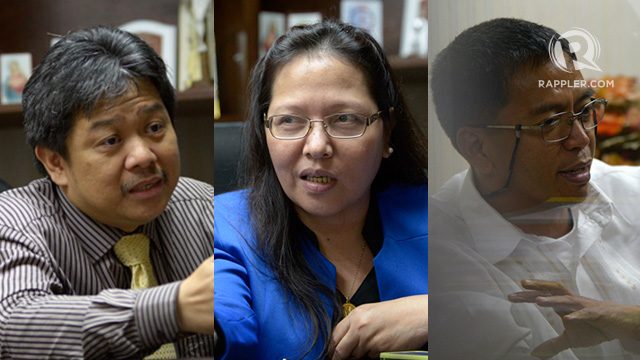 MANILA, Philippines – Given the way they’ve been arguing before the Sandiganbayan in defense of Janet Lim Napoles, one would think that the lawyers of the David, Cui-David, Buenaventura and Ang Offices are completely convinced about her innocence.

The decision to accept the case was not unanimous and was initially hard for Lanee Cui-David, who, like most people, had initially formed an initial impression of the characters involved in the pork barrel scam based on media reports. “I had formed my own opinion about the case based on what I read or saw in the papers and TV of course.”

It was her husband Stephen David who informed them around November last year that Napoles wanted to hire them for her and her children’s defense. Napoles’ children Jo Christine and James Christopher Napoles are also indicted for graft before the anti-graft body’s third division. (READ: Sandiganbayan division split on fate of Napoles children  )

At the time, Napoles’ former counsel, Lorna Kapunan, quit as her lawyer over alleged differences in strategy. Kapunan had been representing Napoles in the pork barrel case and in the serious illegal detention case pending before the Makati Regional Trial Court. Another lawyer however hinted that Kapunan might have been actually fired. (READ: Kapunan resigns as Napoles lawyer)

Stephen David said there were other law firms which offered their services to Napoles but didn’t get Napoles’ nod. After Kapunan, Napoles developed an allergy for high-profile law firms.

“There were about 4-5 groups that approached Napoles offering their services,” law firm partner David Buenaventura said.

A common contact referred the David, Cui David Buenaventura law firm to Napoles, and during the  initial discussion between Stephen and Napoles, she felt she could trust them enough to handle her case.

In that initial meeting, Napoles told her own version of the story, enough for Stephen to consider taking the case. Napoles told Stephen: “Attorney, you know my situation. I have no money. They have frozen my accounts.”

When he told his partners at the law firm that they should take Napoles’ case, Lanee protested. “We fought for two weeks over that,” Lanee recalled.

Stephen however assured them that “there is something in this case that people don’t see.” He said he would first assess Napoles’ credibility by doing his own sleuthing. His background check convinced him that Luy was not exactly forthright and that Napoles may have been the victim instead.

Senators charged with plunder have tapped high-profile counsels that money can afford. Senator Juan Ponce Enrile hired former Solicitor-General Estelito “Titong” Mendoza, who was also former president Joseph Estrada’s counsel in his plunder case that spanned 6 years. Senator Ramon “Bong” Revilla Jr tapped lawyer Joel Bodegon, who also acted as one of former chief justice Renato Corona’s counsel in his impeachment trial. Senator Jinggoy Estrada for his part, engaged the services of Jose Flaminiano, one of his father’s lawyers in his impeachment trial. Flaminiano also serves as counsel for former President Arroyo in her cases before the Sandiganbayan.

Contrasted with these high-caliber luminaries hired by the 3 senators, it would appear that Napoles’ lawyers are legal lightweights, lacking the track record and portfolio, and even the intimidation factor to challenge the prosecution.

But best not to underestimate them. Without fanfare and publicity, they secured easy victories on two plunder cases they had handled – the plunder case against several Public Works officials for the alleged ghost repair of vehicles and the case against former finance undersecretary Antonio Belicena, 3 members of the Chingkoe family, and 3 other finance officials over a tax credit scam.

Filed in 2004 before the anti-graft court, the DPWH plunder case involved the alleged conspiracy among 20 officials and 10 private individuals to defraud government of P134 million in spurious repairs of DWPH vehicles. The plunder charge was dismissed in 2005 after the anti-graft court found no probable cause to proceed with the trial. (However, the lesser offense of graft was filed against the DPWH officials and other private persons. The case is still pending in the Sandiganbayan).

In the tax credit scam, the Court, after “a painstaking and exhaustive examination” of the documents, concluded there is “no single thread of finding that any of the public officers amassed, accumulated and acquired ill-gotten wealth to the tune of at least P50 million.”

In both of these cases, Napoles’ lawyers represented the government officials involved.

With these legal victories tucked under their belt, the partners of the David Cui-David Buenaventura and Ang Offices have fashioned themselves as experts on plunder cases, a reputation they don’t particularly relish, they said.

Like Justice Secretary Leila de Lima, the David couple and Buenaventura were products of the San Beda College of Law. Another lawyer, Bruce Rivera, who acts as counsel for Napoles in the serious illegal detention charge filed by principal whistleblower Benhur Luy, is also from the same law school.

When Stephen first broached the idea that they should take on Napoles’ case, he sought to first verify the credibility of his potential client.

Stephen said he sought to double-check Napoles’ claims, from the illegal detention case filed by Luy to the sources of Napoles’ wealth. He found out that far from the excesses of the family’s lifestyle as reported, the Napoleses are just like any ordinary family. He talked to priests who Napoles financially supported and other people who supposedly knew the real score on Luy’s alleged detention.

Still, his wife was hesitant. Before the Napoles case entered the picture, she was praying for more blessings. “When the case presented itself, I did not know whether to call it a blessing.”

But it was the plea of Napoles’ childrent that changed her mind, if not her heart. “They came over at the office around 9 in the evening. They pleaded for us to take the case. John Raymund was crying. He wanted us to talk to their mother,” Lanee said. She could not say no to the children. (READ: Napoles lawyers: Holy Spirit is lead counsel)

But Lanee could not help but  entertain doubts. “Are we ready to take the case,” Lanee asked Stephen and Buenaventura, referring to the possible adverse public reaction to the law firm. Stephen assured her they had a good case.

Stephen said “there is another version” of the case that deserved to be told. “The entire picture will be revealed at the proper time,” he said.

As if to douse speculations that they took the case due to financial considerations, Lanee said they have not discussed with Napoles the legal cost of their services. “There was no acceptance fee. At the moment, what we’re getting are reimbursements from incidental costs like gasoline allowance, photocopying etc.”

Buenaventura said the law firm is financially healthy even without Napoles’ case. “We have around 2,000 retainers.”

Definitely, Stephen said money is not the prime consideration in taking Napoles’ case. To illustrate, he related that a conduit of former Datu Unsay mayor Andal Ampatuan Jr came to the office carrying P20 million in cash, asking them to represent the Ampatuans in the Maguindanao massacre case. Stephen said they declined the offer from the start.

Why did they take Napoles?

Buenaventura said the case is “professionally and intellectually challenging,” while according to Stephen, unlike Ampatuan, there is one side in Napoles that’s inherently good. He said Napoles, despite the gravity of her situation, has remained strong in her faith.

Besides, for all her faults, Napoles may be a victim herself of a system. “I doubt the credibility of Benhur Luy,” Stephen said.

With the full force and power of government aimed at pinning down the woman who allegedly has mastered the art of plundering public funds, the law firm is not the least intimidated.

Being well-versed on the nuances of the plunder law is a big advantage. And of course, the role each would have to play to build up a strong defense.

Stephen is the self-appointed spokesperson, with his flair for the dramatic. In one hearing, he was cut short by Justice Alex Gesmundo for filibustering and haranguing one witness. “Stop lecturing him about the Miranda rights. If you want, you can just file against him,” Gesmundo told David.

Buenaventura plays the “Devil’s Advocate” whenever they discuss Napoles’ case. A former chief of staff of Senator Francisco “Kit” Tatad, he brings with him the institutional knowledge of how the pork barrel allocations of lawmakers are processed, disbursed and spent. Lanee prepares all the pleadings and motions to be submitted in court.

Inside the courtroom, the lawyers command attention and sometimes manage to eclipse their colleagues in their grasp of the plunder law.

Ace up their sleeve

Napoles’ lawyers also have another ace up their sleeve in the person of Faye Singson, who had previously represented Napoles at the Makati Regional Trial court where she is facing serious illegal detention charges filed by whistleblower Benhur Luy. Singson used to work for the Office of the Special Prosecutor, which is under the Ombudsman. She left the OSP only last year. Out of ethical considerations, she might become actively involved in the plunder cases once her self-imposed one-year ban lapses.

Singson’s participation has raised some eyebrows, considering that she had worked with the OSP before, going after corrupt government officials and then now being identified, and possibly defending in the future, a woman charged with plunder. Her contacts and personal ties with people in the OSP will expectedly serve her well.

“I would like to believe that I am still an anti-graft advocate, then and until now. I don’t want to romanticize the situation, but in my heart, I still do not like graft,” she said in a separate interview.

She said she left the OSP, after about 6 years of working there, “as a career move. I wanted some movement. Maybe my career at the OSP has plateaued.”

In representing Napoles, Singson – also a San Beda law alumna – said she is after “defending her rights as an accused, not really to defend her wrongdoing if any, but to protect her rights.”

This group of lawyers knows they face an uphill battle. Right or wrong, the public may have already prejudged Napoles’ guilt and proclaimed the whistleblowers as heroes. But it is a challenge they have not faced and shirked from in the past. The only added factor this time is public pressure.

Right now, for them, the orders of the day are one, to show to the court that the charges against Napoles do not constitute plunder, and two, that Luy is not credible.

When Rappler interviewed them, Stephen was carrying two newspapers carrying stories of how Luy’s testimony has started to show some cracks. Stephen was in high spirits. – Rappler.com