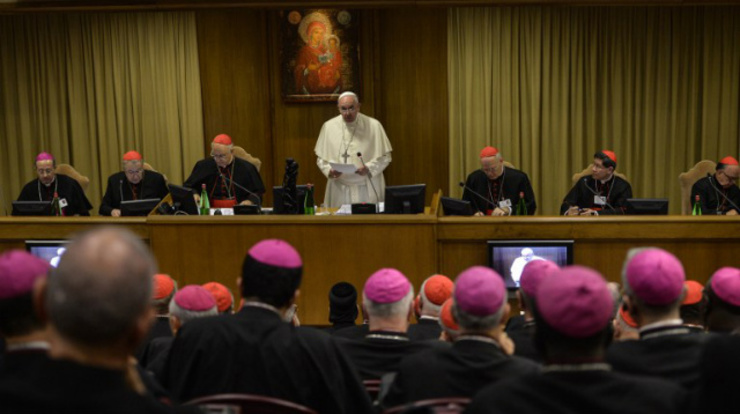 MANILA, Philippines – Less than 100 days before he visits the Philippines, Pope Francis in Vatican City is expected to learn about the plight of millions of Filipino families, particularly those with members overseas.

During a historic meeting of bishops there, Manila Archbishop Luis Antonio Cardinal Tagle wants to discuss a “dramatic” effect of poverty: migration, which forces families to separate because of love.

Tagle continued: “And the best way for some of them to show concern and love and support is to leave, to leave the family and find employment elsewhere. It’s a separation that definitely creates a wound and leaves a wound, especially on the children.”

Tagle is one of the 3 presidents-delegate of the Extraordinary Synod of Bishops on the Pastoral Challenges of the Family, seen as a hallmark of Francis’ papacy. (READ: Catholic Church should scrap phrase ‘living in sin’ – cardinal)

In his homily on Sunday, October 5, Francis said the synod is crucial in the mission “to better nurture and tend the Lord’s vineyard, to help realize his dream, his loving plan for his people.”

He added, “In this case the Lord is asking us to care for the family, which has been from the beginning an integral part of his loving plan for humanity.”

Tagle has always stressed that, for Filipino families, migration due to poverty remains a major challenge that could bring “long-term danger.”

Up to 2.56 million Filipino families have at least a member working overseas. (READ/WATCH: Para kay Mama: A Rappler Documentary)

He said, “What type of emotional first aid, if you want to put it that way, do we offer to incoming migrants, most of them confused, lost, lonely?”

Becoming teary-eyed at one point, Tagle pointed out that the airport “has become a traumatic place” for him. This is because he sees and hears, “especially mothers, talking to their children in the airport, bidding them goodbye, and you can see how their hearts are broken.”

“And then you wonder, what type of strength do they need? Then you just pray, ‘Lord, give them strength.’ And we hope these realities could be brought to the synod – not only from Asia, not only from the Philippines, but many of the poor countries that have been witnessing an exodus of many people,” he said. – Rappler.com