‘Spirit of listening’ in historic Vatican meet on family Facebook Twitter Copy URL
Copied
Initiated by Pope Francis, landmark discussions on the family – including issues such as gay marriage and divorce – will soon shift to local churches in the Philippines

MANILA, Philippines – Catholic bishops felt the winds of change, along with a “spirit of listening,” in a historic Vatican meeting that aims for a caring approach toward families that deal with issues such as contraception, gay marriage, and divorce.

Manila Archbishop Luis Antonio Cardinal Tagle said bishops compared it to Vatican II, a gathering from 1962 to 1965 that reformed the Catholic Church and clarified its role in the modern world.

Tagle relayed this feedback as bishops released on Monday, October 13, a document summarizing the talks in the Extraordinary Synod of Bishops on the Pastoral Challenges of the Family from October 5 to 19.

The relatio post disceptationem or “report after the discussion” suggested that the Catholic Church should, among other things, offer a “welcoming home” for homosexuals. It also said damaged families “first of all should be listened to with respect and love.”

‘Homosexuals have gifts and qualities to offer to the Christian community: Are we capable of welcoming these people, guaranteeing to them a fraternal space in our communities?’

“This morning in the free discussion, some of the synod fathers and participants said openly that they felt the spirit of Vatican II very much, not only in the text of the relatio, but also in the discussions,” Tagle said in a media briefing in Rome on Monday.

In an interview published by Salt and Light on Tuesday, October 14, Tagle also noted a “spirit of listening” – “listening to the Word of God; listening to the voices of the pastors and the churches that they represent; listening to not only the success stories but also to the wounds and the failures.”

One of the meeting’s 3 presidents-delegate, he said this listening led him “to a rather humble stance, and which I think many of the participants also were able to enter.”

Tagle said: “It’s a humility that reminds us, yes, the situation is much more complex than that, but we believe in the richness of the Christian tradition, and can we allow these two realities, rich as they are, to intersect and allow the Spirit to surprise us?”

Tagle, however, clarified that the relatio is “not to be considered a final document,” but a provisional one.

The document is meant to be discussed by local churches, including the Catholic Church in the Philippines, until the bishops gather again in Rome in October 2015.

The Philippines itself, which Francis will visit in January 2015, faces a host of family issues with the Catholic Church at the forefront. (READ: CBCP surveys Filipinos on contraception, gay unions) 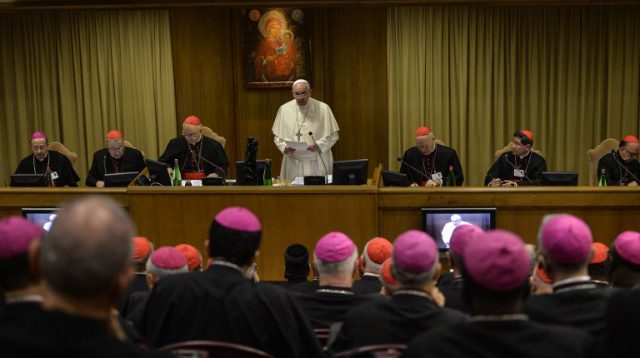 Catholic bishops have, for one, rejected same-sex marriage. They have also opposed laws that promote contraception and divorce, even as the Catholic Bishops’ Conference of the Philippines, under Francis, has begun to adopt a more conciliatory approach. (READ: Move on, bishops urge critics of RH law)

Tagle said another issue is the need to help millions of Filipino families separated by poverty. (READ: Tagle: In Philippines, love can separate families)

Church ‘that is not self-absorbed’

To be sure, the Synod of Bishops is not expected to revise doctrines that bishops have cited in blocking controversial measures. It is, however, seen to push for a more caring or, in the words of the Pope, “merciful” approach.

Speaking to journalists, Tagle explained the synod’s comparison to Vatican II, which “reflected definitely on the church and its mission in the contemporary world.”

‘The synod, generally speaking, can be defined as an assembly of bishops…helping the Pope in the governing of the universal Church by rendering their counsel’

Vatican II, stressed, among other things, the role of lay people in the Catholic Church and the need for inter-religious dialogue.

Tagle said synod fathers take their cue from the late Pope Paul VI, who continued Vatican II after the pope who started it, John XXIII, died in 1963.

The Filipino cardinal noted that Paul VI “had, as a vision, a Church that is not self-absorbed, but a Church that knows how to exist as a missionary Church, listening and dialoguing with the contemporary world.” (READ: New PH cardinal tells Church: Be humble)

Francis himself, incidentally, has also warned against a self-centered Catholic Church.

“And I think that was what the synod fathers were affirming,” Tagle continued. “That initial insight of Vatican II from John XXIII and Paul VI, in a way, was happening to us, we who were not able to participate in Vatican II. But we had a slice of it, some sort of a taste of it.” – Rappler.com