Nov 2, 2014 1:37 PM PHT
Michael Bueza
Facebook Twitter Copy URL
Copied
The cemetery's rehabilitation into a state-of-the-art facility should have been started after a 5-year closure.

MAKATI CITY, Philippines – Unkempt trees and shrubs lined the unpaved pathways. Most tombs were blackened by dirt and grime, some were hidden underneath wild vines, while others were in shambles.

The ambience inside the cemetery of the country’s financial capital leading to All Saints’ Day and All Souls’ Day was as calm and serene as its occupants sleeping eternally in peace. It pales in comparison to the bustling activity at the Manila South Cemetery just beside it. 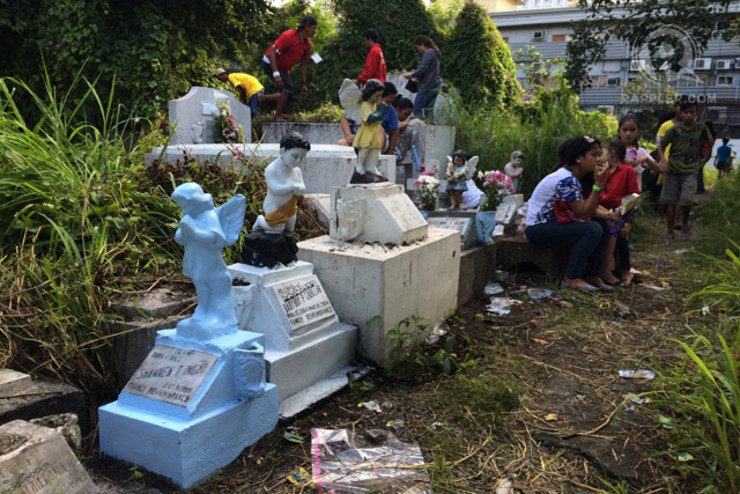 Visitors of the Makati City Public Cemetery along Kalayaan Avenue would see its sad, deteriorating state. But it was not supposed to look like that. (READ: Makati’s cemetery: Gone to the dogs)

The Makati city government temporarily closed the cemetery in January 2008, through City Resolution No. 2008-003, to transform it into a state-of-the-art facility, which includes a crematorium and a columbarium. Interment services were suspended for 5 years, giving families and relatives time to retrieve their loved ones’ remains and transfer it to another cemetery.

By now, nearly 7 years since its closure, the cemetery should have been on the road to resurrection, but it has yet to proceed.

(You know politics here in Makati. It’s too much. The redevelopment should have started. In fact, this cemetery as it is right now should have been gone.) He said that funds had already been allocated and a contractor had been selected for the redevelopment. But for unknown reasons, the project was put on hold, according to Nava.

Another possible reason for the delay in the cemetery’s upgrade, said Nava, is the Senate probe into the allegedly overpriced Makati City Hall Building II and into the wealth of Vice President Jejomar Binay, who was mayor of Makati for over 20 years. His son, Jejomar Erwin or “Junjun”, became mayor of Makati in 2010. His election that year was not without controversy, as he went up against former Binay ally and outgoing vice mayor Ernesto Mercado, who is now testifying against Vice President Binay in the Senate.

(As soon as there’s a signal to start, we would proceed because we have been waiting for so long.) – Rappler.com