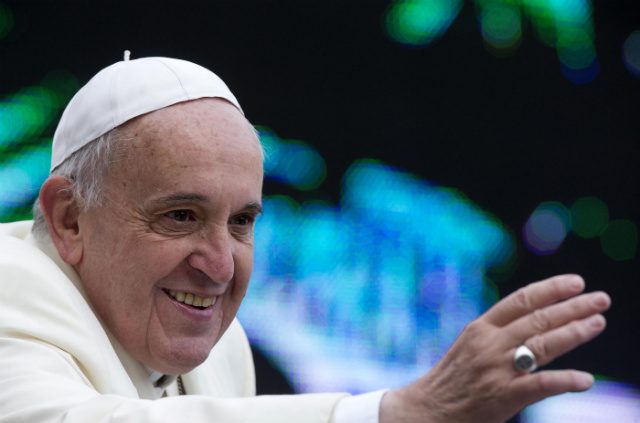 Facebook Twitter Copy URL
Copied
(UPDATED) Authorities have limited the number of people who will be allowed to enter the Manila Cathedral for the Pope's first mass in the country, citing security reasons

MANILA, Philippines (UPDATED) – Only 2,000 priests, bishops, and religious persons will be allowed to enter the Manila Cathedral, where Pope Francis will hold his first Mass in the Philippines, next year.

In a media briefing on Tuesday, December 2, Manila Cathedral rector Monsignor Nestor Cerbo said authorities decided to limit the number of people who will be entering the church for safety reasons.

“The capacity of the cathedral is 2,000 for the Pope’s visit for safety considerations. We should leave aisles open in case of emergencies,” Cerbo said.

Manila Archbishop Luis Antonio Cardinal Tagle said the Mass on January 16, 2015, will be for bishops, priests, and consecrated persons.

It will be the Pope’s “first liturgical encounter” with the leaders of the Church, Tagle added.

Two other Papal Masses, on the other hand – in Luneta and Tacloban – will be open to the public.

Of the 2,000 seating capacity, only 500 will be allotted for lay people: members of the choir, medical personnel, and members of the Presidential Security Group (PSG), who are assigned to secure the safety of the Pope.

The Catholic Bishops’ Conference of the Philippines (CBCP) has also decided to have 10 priests and 5 religious laypeople from each diocese attend the Mass, according to Cerbo.

With a little over a month left before the Pope makes his first visit to the Philippines, restoration work is in full swing at the cathedral, which was only recently reopened after being closed for repairs in 2012. (READ: Race vs time: Quakes force Manila Cathedral to close)

In describing the church’s preparations for the papal visit, Cerbo highlighted the historical importance of the cathedral.

It is the only church in the Philippines that was declared a basilica by the initiative of the late Pope John Paul II, he said.

“We are happy that God is blessing the restoration work that we have been doing at the Cathedral with the visit of Pope Francis,” Cerbo said.

He added that they are now working to speed up the repair work and upgrade the air-conditioning system.

For the Pope’s first Mass in Manila, Cerbo said tight security should also be expected.

Identification cards will be distributed to those attending the Mass. No replacements and last-minute changes will be entertained.

“We will place security scanners at the Manila Cathedral as part of the strict security procedures for the papal visit… The PSG will be very strict,” Cerbo said.

Presidential Communications Undersecretary Jess Yu gave assurances that the government is working closely with all concerned groups to ensure the safe and orderly conduct of the papal visit.

The Metropolitan Manila Development Authority (MMDA), the Department of Public Works and Highways (DPWH), and the Philippine National Police will enforce crowd control outside the cathedral for lay people visiting the area, Yu added.

After the Mass, the Pope is scheduled to meet with families at the Mall of Asia Arena in Pasay City.

On January 17, Francis is scheduled to meet with survivors of Typhoon Yolanda (Haiyan) in Tacloban City, before spending his last full day in Manila at the University of Santo Tomas and Rizal Park. – Rappler.com