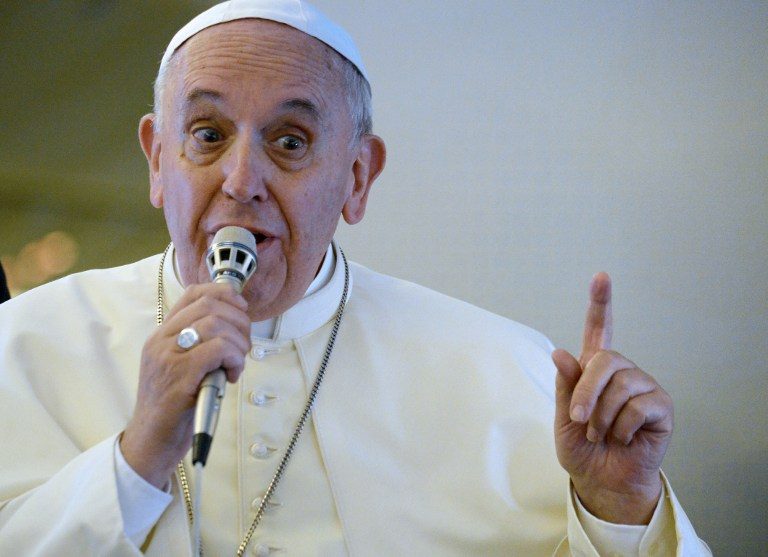 Facebook Twitter Copy URL
Copied
The popemobile will be 'vulnerable, open, and accessible' – representing the image that Pope Francis wants the Church to project

MANILA, Philippines – When Pope Francis makes his first visit to the Philippines next year, he will be “vulnerable, open, and accessible” in a vehicle that will not be bulletproof.

In a media briefing on Tuesday, December 16, Fr David Concepcion of the papal visit committee said the Argentine pontiff will be provided a white “popemobile” that will allow Francis to be visible to the public.

Concepcion said Francis will use two popemobiles for his travels around Manila and Tacloban City during his 5-day visit. (READ: Pope Francis to pray before Yolanda mass grave)

His visit to Tacloban will mark the first time in 3 decades for a pope to go beyond Manila. (READ: Pope chooses Visayas as core of Philippine trip)

Concepcion said Francis himself requested the features of the popemobile to represent the vulnerability of the Catholic Church and highlight the Church’s relationship with the faithful.

Concepcion said that authorities had acknowledged the design of the vehicle would pose a “security nightmare.”

But he added that Francis wanted to be close to Filipinos and be able to be one with the crowds.

Because the popemobile will not be a closed vehicle, it will not be airconditioned, and Francis would be exposed to the elements.

“Ang init na nararamdaman ng mga tao, mararamdaman niya. Kung umulan, mababasa siya.” (He will feel the heat that the crowds feel. If it rains, he will get wet.)

Members of the papal visit committee earlier said the popemobile would allow Francis to be visible to the public.

The open design would allow the Pope to “hear what the crowd is shouting in the streets.”

The pontiff, who has been known to make unscheduled stops to chat and be with the crowds, will be able to step off the vehicle due to its open design, Concepcion added. – Rappler.com