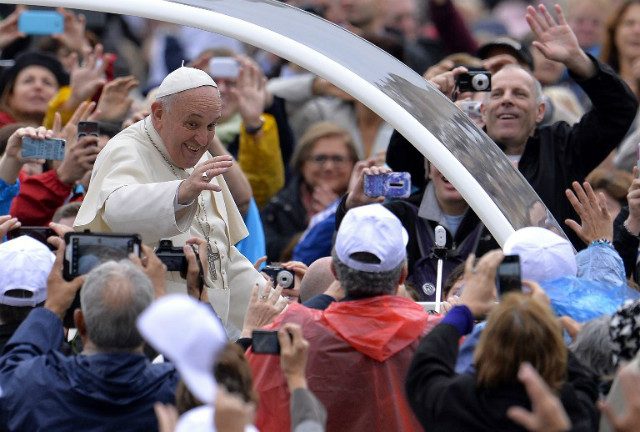 MANILA, Philippines – Exactly a week before the arrival of Pope Francis to the country,  Malacañang issued some guidelines to those who are planning to participate in related events, and urged their full cooperation with authorities to ensure the papal visit will be smooth-sailing.

Palace Communications Secretary Herminio Coloma Jr provided the guidelines in a news briefing after President Benigno Aquino III led a meeting with members of the Cabinet, Manila Archbishop Cardinal Luis Antonio Tagle, and other church leaders on the papal visit on Thursday, January 8.

Coloma said the meeting, where the group discussed security preparations, will ensure “coordination of the government and the church for the successful state and apostolic visit of Pope Francis” from January 15-19.

At the news briefing, Coloma gave some reminders and ground rules for those attending the Pope’s Luneta Mass on January 18:

Coloma appealed to the public to cooperate with authorities and said security measures will be “strictly followed.”

“The government and the Church are united in appealing for public cooperation in following all our guidelines which seek to ensure the smooth flow of events, and the safety of all participants,” Coloma said in Filipino.

Around 1.2 million people are expected to Mass at Rizal Park, but the number could swell up to 5 million. Organizers have said 20 first aid stations and 400 portalets will be set up in areas around the park.

During the Palace meeting, the itinerary of Francis was discussed as well as the movements of the Pope in Manila and Leyte.

‘Review of past lessons’

As for the traffic rerouting plan, Coloma said the Metropolitan Manila Development Authority (MMDA) will announce details after the January 9 Feast of the Black Nazarene, the biggest religious gathering in the country held annually in Manila. The plan will include drop-off points and designated parking areas.

He also called attention to announced flight changes during the Pope’s trip.

Coloma gave assurances the administration is ready for the visit, adding lessons from past incidents were reviewed and considered.

He cited the past visits of Pope Paul VI, Pope John Paul II, and the crowd surge at the motorcade of other relevant antecedents such as the Feast of the Black Nazarene procession.

“If you remember from last year, the Mass didn’t finish because the crowd surged into the Quirino Grandstand and demanded the procession begin,” he said.

Coloma said authorities and Church leaders also reviewed the “Wowowee” stampede at the Ultra in 2006 which killed over 70 people and injured hundreds of others.

“All relevant antecedents were considered in determining the security that would be followed,” he said.