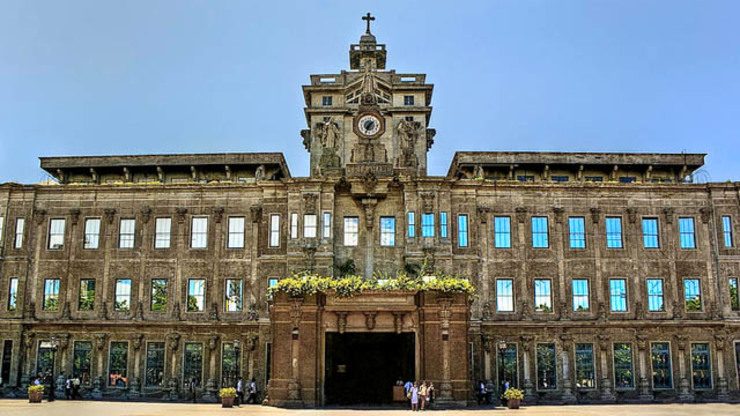 MANILA, Philippines – After two* decades, a pope again sets foot on the University of Santo Tomas (UST), the largest Catholic university in the world in terms of student population. With 24,000 youth delegates expected to be in attendance, Pope Francis will hold a meeting with the youth and will deliver a speech at the campus football field on January 17.

Here are just some interesting facts about the university:

1. It is the oldest existing university in Asia.

In 1611, Colegio de Nuestra Señora del Santisimo Rosario was established through the donation of then Manila Archbishop Miguel de Benavides. It was renamed in 1625 to Colegio de Santo Tomas, after its patron-saint, St Thomas Aquinas. Then in 1645, Pope Innocent X raised its status to a university.

The school is formally called The Royal and Pontifical University of Santo Tomas, The Catholic University of the Philippines. The term royal was granted by King Charles III in 1785 after recognizing its role in the British invasion of Manila from 1762-1764. The term Pontifical came from Pope Leo XIII in 1902, making it the second university in the world to have such status (after Gregorian University). As a pontifical university, it was established or directly approved by the Holy See. It offers ecclesiastical degrees which are prerequisites for bishop candidates. Its Catholic title was granted by Pope Pius XII in 1947.

3. It holds important roles in history.

In 1865, Queen Isabella II authorized UST “to direct and supervise all the schools in the Philippines.” Back then, the university approved all the examinations and diplomas issued from other schools. Then from 1942-1945, during the Second World War, the university academic life was disrupted when Japanese Forces turned UST into an internment camp. Around 2,500 allied civilians were detained here.

4. Pope Francis is the 3rd pope to visit UST.

In the past 50 years, the country has been visited by two popes. The first was in 1970, when Pope Paul VI visited the university. It was followed by Pope John Paul II who went to UST in 1981 as part of his Asian pilgrimage. Pope John Paul II again visited UST in 1995 for the World Youth Day. He held Mass at the Central Seminary Chapel for the international delegates of the International Youth Forum, which the school hosted.

UST officials invited Pope Benedict XVI for the school’s 400th founding anniversary in 2011. However, he declined the invitation and sent a representative instead. He also delivered his congratulatory message through a pre-recorded video.

In March 2011, during Ash Wednesday, UST broke the world record for forming the largest human cross. The human cross was patterned after the Dominican cross colors of black and white. The record was previously owned by Oslo Red Cross in Norway.

The UST museum located in the Main Building also hosts the largest religious image of a crucified Christ in the country. Carved during the 16th or 17th century, it is made of ivory and can be found at the museum’s Hall of the Philippine Religious Images. – Rappler.com

Editor’s note: The last visit by a Pope to UST was two decades ago, not one, as stated in a previous version of this article.