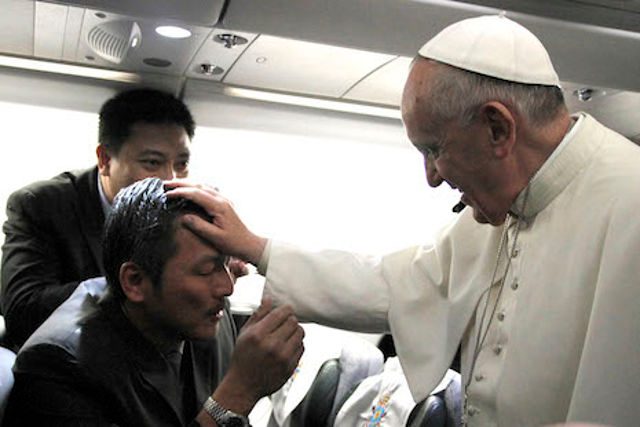 Facebook Twitter Copy URL
Copied
Pope Francis might be the leader of my Church, a rock star and a holy man, but for me right now, Pope Francis is an assignment

ONBOARD THE PAPAL PLANE – “I thank you for your company in this trip, and I wish you a good trip,” the pope told us with a smile.

But he warned with a chuckle, “there is a lot of work.”

The journalists on board AZ 4000, the papal flight from Rome to Sri Lanka laughed.

It was the first day of the papal trip to Sri Lanka and the Philippines. And it was clear it would not be easy. (READ: Pope Francis and the road to Manila)

The trip started early Monday morning, with a convoy of journalists dragging their luggage from the hotel to St Peter’s Square to take a taxi. Note: one cannot just hail a taxi in the streets of Rome. You either call by phone or you go to a taxi stand.

So off we went to the airport, 4 hours before the flight on orders of the Holy See Press Office.

For those accompanying the pope, the security check is thorough. There are no scanners. Instead, security personnel go through every item inside one’s luggage.

Airline personnel then collect the passports and immigration papers of all the journalists. These will only be returned at the end of the trip.

At the door to the tarmac, envelopes containing press credentials for the country where the pope is going and copies of the pope’s speeches (under embargo) are distributed. When we board the Alitalia Airbus A330 through the back door an hour before take off, it’s a free for all. There are no assigned seats except for photographers and television cameramen who need easy aisle access. The middle section of the aircraft is empty while the front section is reserved for the pontiff and other Vatican officials.

I grabbed 31D, four rows from the front where the pope and his spokesman hold on-board addresses and press briefings.

Some 15 minutes after take off, Vatican spokesman Father Federico Lombardi emerged to inform the media that Pope Francis would be coming in a few minutes to greet his travel companions.

“You stay seated,” he warned the press.

A few minutes later, Pope Francis came out and took the microphone. He was smiling and waved to everyone.

“Good afternoon,” Pope Francis said. “I wish you a good trip. There is a lot of work.” Pope Francis went down the aisle and approached each one of us.

When my turn came, he held out his hand. I shook it and brought it to my forehead to do the traditional “mano,” the Filipino way of greeting elders with respect.

(It was the wrong move for a photo opportunity. I thought of doing a selfie, but I held on to the pope’s hand as he exchanged greetings with me. There goes the souvenir picture!)

I held on to the pontiff’s hand a little bit longer, enough to remember the prayers and petitions that friends, relatives and loved ones asked me to whisper to the pope.

I looked straight into his eyes and recalled sick friends who asked for prayers, the political prisoners who appealed to be mentioned to the pope, the indigenous peoples, and the millions of Filipinos who I am sure will flock to the streets to see the pontiff later this week.

I told the pope I am a Filipino — one of the 14 Filipino journalists on the flight of 73. He smiled and said “very good” and “welcome”.

Thoughts came rushing in my head. I ran through my mental checklist. “Peace in the Philippines and Mindanao, good health to family and friends, forget the politicians, etc. Will I ask a question? What were again the environmental issues? What about mercy and compassion?”

Then the pope tightened his grip and I let go of his hand. It was enough, I thought.

I was happy to see a Filipino colleague hand to the pope a drawing made by her small children. “Beautiful,” the pope commented.

Another companion handed him a book and a television cameraman asked to be blessed. The pope obliged and patted the journalist’s head. The cameras clicked.

Pope Francis might be the leader of my Church, a rock star and a holy man, but for me right now, Pope Francis is an assignment. I am here to work, to meet the deadline. (I should have not forgotten to ask the pope to pray for my editors.)

When the pope returned to his seat, musical chairs started again. I transferred to a seat by the aisle, hoping that if ever the pope makes another round I will have a better chance of getting a selfie, or maybe ask him to bless a rosary.

But right now, the pope is an assignment, and the papal trip is a job that has to be done, and done well.

“There is a lot of work,” Pope Francis himself said. “Yes, that is so.” – Rappler.com

Journalist Joe Torres and photographer Roy Lagarde are part of the Philippine media contingent traveling with Pope Francis from Rome to Sri Lanka to the Philippines. They are reporting on the papal visit for UCANews and Rappler.