MANILA, Philippines – All eyes will be on Pope Francis when he visits the Philippines from January 15 to 19. But for some Filipinos, there will be no time to fix their gaze on the leader of the Roman Catholic Church.

They will get the chance to get up close and personal to the Pope, and maybe even converse with him. But the thousands of men and women tasked to guard Francis won’t have that luxury.

Theirs will be a gaze that goes outwards – monitoring the immediate and extended vicinity of the Pope, wary of suspicious characters in the crowd of millions who want to catch a glimpse of him.

Members of the Presidential Security Group (PSG) during the last time a pope visited the Philippines know this all too well.

Chief Superintendent Josephus Angan, then a Senior Inspector in the PSG, was the head of a company of men and women assigned to be Pope John Paul II’s close-in security.

He described it as an “amazing experience” but one that he didn’t really get to appreciate until after the Pope left.

“It only started sinking in after [Pope John Paul II] left. While he’s there, you’re focused on your job. There’s no time to take in the experience,” Angan, now the regional chief of the Philippine National Police (PNP) in Western Visayas, told Rappler.

Back in 1995, during now Saint John Paul II’s visit to the country, it was the PSG who took the lead in mapping out the security preparations. Another group was tasked to secure his official residence while in the country, the Apostolic Nunciature in Manila, while a different group secured all of his areas of engagement. 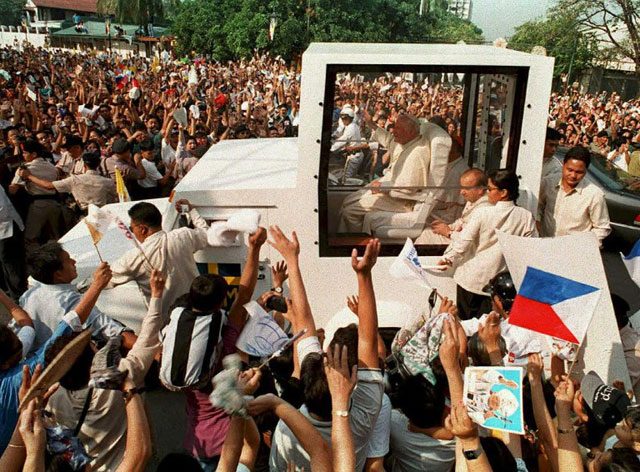 The young PNP (it was founded in 1991) and the Armed Forces of the Philippines (AFP) joined forces for the Pope’s security in 1995. It took at least a year for the country to prepare for John Paul II’s visit, recalled former PSG officer Avelino “Sonny” Razon Jr.

Angan was unarmed while he was guarding the Pope at the time. Razon, on the other hand, had a gun with him. Both were prepared to take a bullet for John Paul II, now a saint of the Roman Catholic Church.

The two former PSG officers consider John Paul II’s visit one of the biggest challenges they’ve had to handle in their careers.

Twenty years later, preparations are just as intense, if not more so. The security situation is different and threats more pronounced. (READ: Plot to kill a pope: ‘Miracle’ saved John Paul II in Manila)

The Pope will be leading 44 sub-events while in the Philippines, all of which are assigned a security commander and at least one medical team. 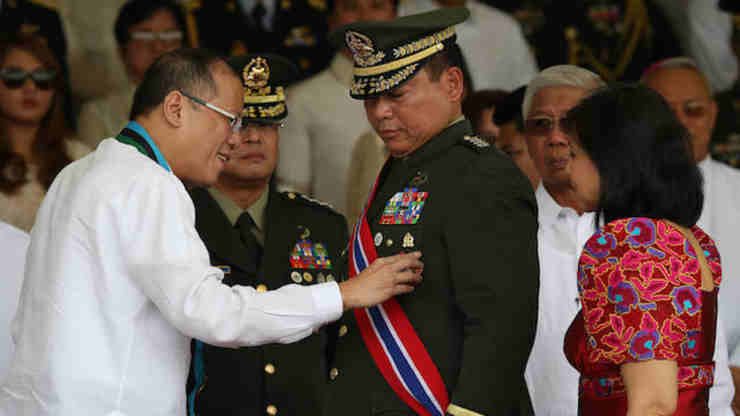 The biggest events – and the biggest security nightmare for government – are his visit to Typhoon Yolanda-hit Leyte and the Concluding Mass in Luneta Park. Millions are expected to attend the two events alone.

Bautista is the chief coordinator of all security concerns regarding the visit, reporting directly to the President. He is current executive director of the Cabinet Cluster on Security, Justice, and Peace with a rank of undersecretary.

Explaining his choice of Bautista as head of the security team for the Pope, Aquino said the former AFP chief has shown his skills in working with both the military and civilian sector.

(You need someone who can focus and act as the conductor of an orchestra to make sure their performance goes well. I believe Bautista is more than capable.)

As security chief of the papal visit, Bautista coordinates with the health and foreign departments, the Metropolitan Manila Development Authority, the AFP, the PNP, and the Bureau of Fire Protection, among others.

When he headed the AFP, Bautista had to handle the Sabah crisis, the Zamboanga siege, the Bohol earthquake, and Typhoon Yolanda.

Bautista may also serve as the country’s chief negotiator with the Communist Party of the Philippines’ (CPP) political wing, the National Democratic Front.

Plan A to Z

His job is no easy task.

Some 25,000 PNP personnel will be deployed in Metro Manila and Leyte for the Pope’s visit, with over 7,000 AFP troops to serve as support. All in all, Roxas earlier said, some 40,000 security personnel are being deployed to secure the Pope. (READ: Devil in the details: Protecting Pope Francis in PH visit)

Back in 1995, it was the PNP that was responsible for controlling the crowd, while the PSG focused on making sure the Pope will not be harmed. 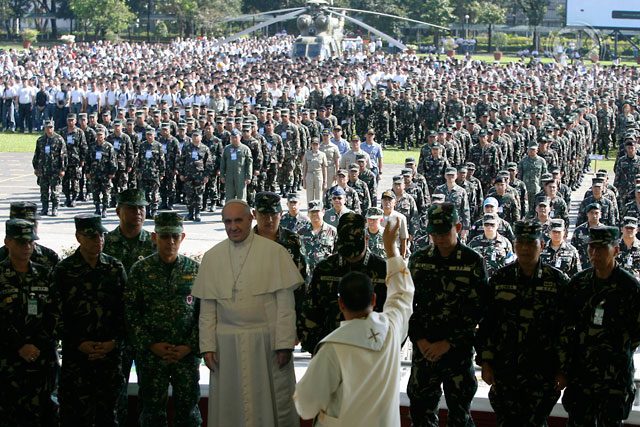 Angan, who was a member of the PSG under Fidel Ramos’ presidency, says the job of close-in security goes beyond taking a bullet for your principle.

A schedule is fairly hard to finish, especially when you have a dignitary with a tendency to deviate from set plans. Pope John Paul II, for instance, decided he wanted to mingle with the crowd during arrival ceremonies. Ramos could not do anything about it, and was forced to act as the Pope’s “security” since he was closest to John Paul II.

The Pope’s close-in, route, and area security will also have to deal with a crowd determined to interact with, touch or at least see the Pope.

And when the going gets tough, and the crowd inches too close for comfort, his security team will have to go down their vehicles and walk with the Pontiff, pushing over-eager attendees out of the way.

“Buti nalang naka-barong ako noon (Fortunately, I wore a barong),” recalled Razon. In contrast, Angan and his men wore suits while walking, running, and sprinting under the hot Philippine sun.

Both Angan and Razon look back at their stint in the PSG with a tinge of nostalgia and perhaps even relief. Razon, who was riding the car directly trailing John Paul II’s popemobile, jokes he was blessed by the Pope himself a thousand times over the course of 5 days.

“Kaya noong 1995, nagpapakabait ako noon (That’s why I was a better person that year),” he added in jest.

“You look and think of it as your own little contribution to the bigger picture – your country hosting the Pope,” said Angan, who will be supervising (from a distance) his personnel who will be sent to Leyte to augment the region’s security forces. – Rappler.com