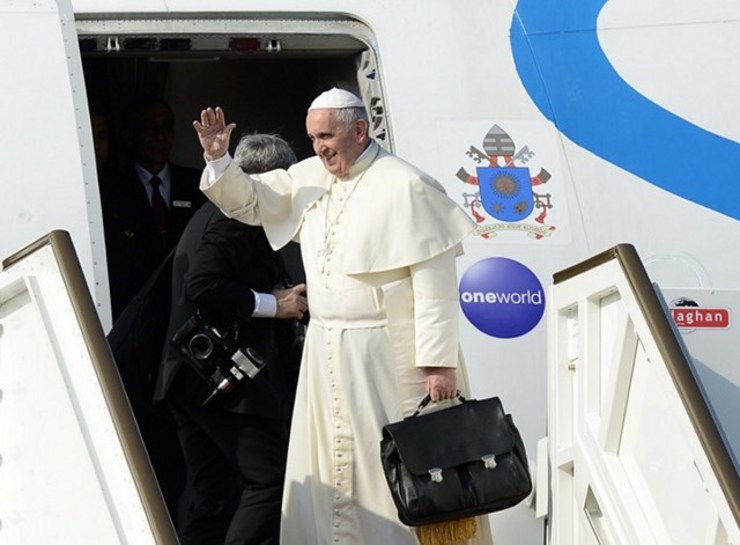 MANILA, Philippines (UPDATED) – Pope Francis is on his way to the Philippines, departing Sri Lanka 9 am Colombo time (0330 GMT) or past 11 am Manila time on Thursday, January 15.

On his last night in Sri Lanka, the Pope known for surprises made an unannounced visit to a Buddhist temple Wednesday.

Vatican Spokesman Father Federico Lombardi said that the Pope stopped by Mahabodhi temple in Colombo and listened “with great respect” as monks explained aspects of their religion.

The visit is only the second one a Pope made to a Buddhist temple since Pope John Paul II made a trip to Thailand in 1984.

Francis visits the Philippines on the second leg of his Asian trip meant to highlight the continent’s potential to grow the faith amid a decline in Europe and the United States. (READ: Vatican: Philippines part of Church’s ‘great frontier’)

Known as the bastion of Christianity in Asia, the Philippines has a deeply Catholic majority, accounting for 80% of the 100 million population. Church leaders said the theme of the Pope’s Philippine visit is “mercy and compassion.” (READ: Vatican: Philippines to help Pope reach Asia)

In the capital Manila, 25 leaders from the government and the Catholic Church will greet Pope Francis upon his arrival at the Villamor Air Base at 5:45 pm on Thursday.

The Pope will then travel from Pasay City to the Apostolic Nunciature or the Vatican Embassy in a ceremonial route that may take up to 4 hours.

Highlights of the 5-day Philippine trip include a Saturday visit to typhoon-hit Tacloban City and Palo in Leyte, where the Pope will meet with victims of Super Typhoon Yolanda (Haiyan), the strongest storm to hit the Philippines in recent history and one of the most powerful to make landfall. (READ: ‘Daily typhoons’ to welcome Pope in the Philippines)

The Pope will also celebrate Mass on Sunday in Rizal Park in Manila, expected to draw one of the largest crowds for a papal event. (READ: Pope in Luneta: Things you should know)

Below is the full list of government and religious leaders who will welcome the Pope to Manila: