What they are hiding from Pope Francis 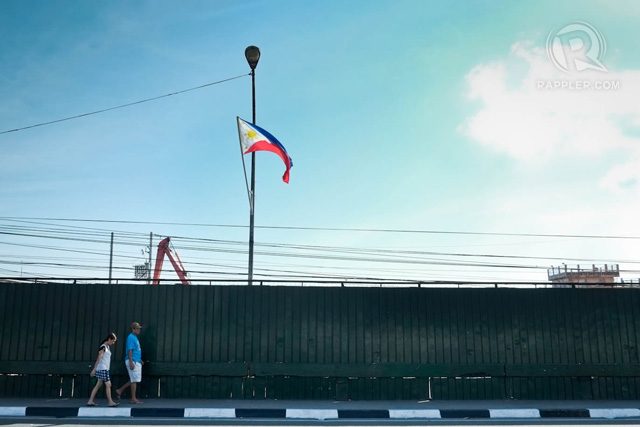 Facebook Twitter Copy URL
Copied
Will Pope Francis ever witness the great divide between the country’s rich and poor?

MANILA, Philippines — How can a developing country like the Philippines hide its slum communities and abject poverty from visiting heads of state?

The Philippines is widely known for having one of the largest urban poor populations in Asia, with an estimated 4 million informal settlers in Metro Manila alone, living in shantytowns.

Perhaps the answer to the riddle is best exemplified by the 12-foot-high, dark green, corrugated steel wall on Tambo Bridge (Airport Bridge) in Parañaque City.

Enroute from the Ninoy Aquino International Airport to the Apostolic Nunciature, this green wall is what Pope Francis will likely see when the Papal convoy passes by on Thursday, January 15.

However, beyond the green wall, hidden from plain sight, along Estero de Tripa de Galina, is Riverside 2, a slum community with some 500 families. Their homes are currently being demolished. About 175 of them have been relocated to an off-city, resettlement site in Trese Martires, Cavite.

But like the stories of most homeless people relocated to housing projects in far-flung areas outside the metro, where they say jobs and basic services are scarce, they return to the city, and resume their lives as informal settlers.

Barangay official Jose Fruto, a Riverside resident for over 23 years, does not believe the wall was erected to hide their community from the rest of the world.

“The wall has long been there. At first, it was just made of plywood. There was a painting competition. Students from various schools participated in that contest. But when a storm damaged the wooden wall, it was replaced by this new wall,” Jose claimed.

But Jose cannot remember the year when the alleged wooden wall was erected, or when the new steel wall was installed.

Before the wall became green, it was pale yellow. In fact, during an anti-poverty conference in 2012, the wall was covered by a giant billboard that welcomed the finance ministers and senior officials from the 67 member-states of the Asian Development Bank’s Board of Governors. “It’s more fun in the Philippines!” read one of the slogans on the billboard.

Former presidential spokesperson Ricky Carandang reportedly said that any host country will do a little “fix-it-up” before guests arrive.

While the wall may have fenced off the Riverside shantytown, it also seems that it became a symbol of the great divide between the country’s haves and have-nots, between those who prosper with the economic gains of the country and those who are left behind, mired in poverty.

Susan Abing, a married mother of 3, and a former resident of Riverside 2, believes that the wall was erected to shield them from the view of residents of the high-rise condominium on the other side of the bridge.

“They think we’re an eyesore,” she said.

The hallow facade of shallow progress

Seven years later, when Pope John Paul II made his first visit to the country in 1981, slum areas were again boarded up. Moreover, the Marcos administration tried to hide the existence of political prisoners under martial law.

During the state visit of former United States President George W. Bush to the Philippines, the administration of Gloria Macapagal-Arroyo allegedly did an “Imelda”, applying cosmetic solutions to cover up these eyesores. Reports said Metro Manila’s streets had freshly painted lines and new plant pots, from the airport in Parañaque, to the Batasan Complex in Quezon City. Many slum communities were also shielded from view with huge billboards welcoming the US president.

These sham solutions are like the hallow facades of the cardboard communities of Russian military leader Prince Grigory Potemkin, who erected fake villages along the banks of Dnieper, to fool Catherine the Great into thinking that their colonization of Ukraine was very much in progress.

The myth of Potemkin’s past seems to have been embraced again by the Aquino administration.

During US President Barack Obama’s Philippine visit, the bay walk along Roxas Boulevard, from the Cultural Center of the Philippines to the US embassy, was rid of the many indigents who made it their home.

The homeless are said to be security risks. So are the vendors in Luneta, who were evicted from the national park last Sunday, January 12. The Pope will celebrate his final Mass at the Quirino Grandstand in Luneta, capping his 5-day Philippine visit.

Mariano Casimiro, chairman of the Training Committee of the National Parks Development Committee, said this was done only in accordance with the directives of the Philippine National Police (PNP) and the Presidential Security Group (PSG).

On the other hand, Danilo Depositar, president of the Peoples Democratic Hawkers and Vendors Alliance Inc, believes the NPDC is using the papal visit as an excuse to expel them permanently.

“They can return to Luneta after the papal visit. In fact, we have 99 rolling carts waiting for them,” Casimiro explained.

But Casimiro also admits that apart from security measures, their secondary concern is the beautification of the national park.

While many may welcome this as a positive move, others are concerned that these measures are just akin to sweeping dirt under the rug. Depositar said vendors in Luneta are not threats to security, and that they are just making a living, doing what they can to survive.

“The extent of the security measures being implemented by the Philippine government is a disgrace to the spirit of the papal visit, which even has the theme of ‘mercy and compassion’,” said Cristina Palabay, Secretary General of the human rights group Karapatan.

Palabay also alleged that these security measures are only being used to shield Pope Francis, not from threats, but from the harsh reality facing impoverished Filipino masses.

To protect the Pope from possible threats, including getting mobbed by the faithful, the Philippine military and the PNP are deploying a combined security contingent that is 37,000-strong, the largest ever for a visiting head of state.

Riverside 2’s barangay enforcer, Joe Fruto, the long-time resident of the informal settlement being shielded by a green wall on a bridge near the airport, has volunteered to help with the crowd control in their area. He said he will act as a human shield.

But Pope Francis is known for breaking security protocol. In his visit to Brazil, he chose to forego the armored popemobile and rode instead on a subcompact car. He again shunned riding bulletproof vehicles in his visit to the Middle East. He has also hopped out of his popemobile and took selfies with young people at St Peter’s Square.

The “People’s Pope,” who eschewed the trappings of his position, has been constantly preaching to the Catholic faithful to love the poor. But will Pope Francis be able to see how the poorest of the poor live in the slums in Manila? Or will the harsh realities that poor Filipinos face every day, be forever obfuscated? There lies the danger. 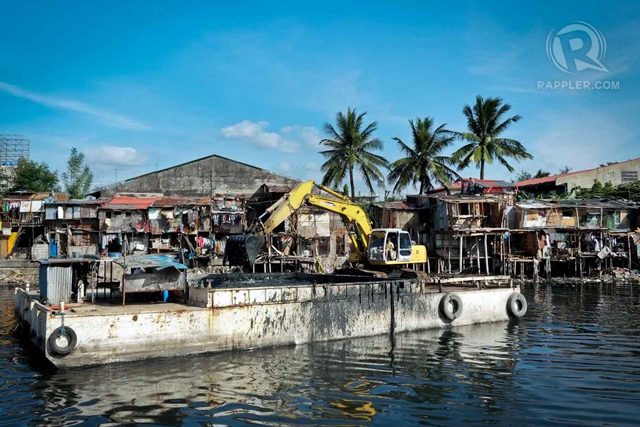