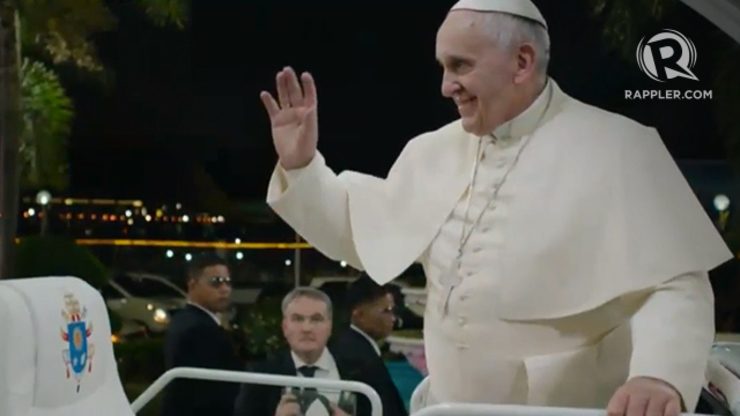 Facebook Twitter Copy URL
Copied
The motorcade of the Pope is without hitches. He arrives at the Apostolic Nunciature in less than 40 minutes from Villamor airbase.

MANILA, Philippines – Philippine officials braced for the worst: unruly crowds that would cause delays, possibly stretching Pope Francis’ estimated 45-minute journey from the Villamor Airbase to the Apostolic Nunciature to a 4-hour trip. (IN PHOTOS: Pope Francis in the Philippines, Day 1)

But the motorcade of the Pope on his first day here went without hitches, taking him and his popemobile less than 40 minutes to reach his official residence in Manila, the Vatican embassy.

Officials were wary of a repeat of the last time a pope visited the Philippines. In 1995, when Pope John Paul II visited the country for a second time, pandemonium occurred as the crowd breached security barriers, blocking the popemobile’s path. (READ: Securing the Pope) In the last few weeks, the government’s security team for the papal visit reminded the public to follow the rules and stay calm throughout the Pontiff’s visit from January 15 to 19, 2015.

The crowd waiting to catch a glimpse of the Pope was visibly eager but did not push or shove.

Valmoria personally appealed to the crowd there to remain calm.

At least 18,000 policemen were deployed to secure the Pope’s 22-kilometer trip from Pasay City to Manila. The police were also reinforced by personnel from local government units, parishes, the Metropolitan Manila Development Authority, and the Armed Forces of the Philippines, to name a few.

The Philippines will be tapping the services of some 40,000 security personnel – a mix of police, soldiers, traffic constables and volunteers – to protect the Pope during his 5-day trip. (READ: Airlifts and emergencies: Keeping people safe in a papal visit)

On Friday, January 16, Francis will meet with government officials at the Malacañang Palace, lead a Mass at the Manila Cathedral and meet families at the Mall of Asia Arena. (READ: Pope’s first PH Mass: Will he talk about the Church’s failings?)

His third day in the Philippines on Saturday, January 17, will be spent in the typhoon-ravaged province of Leyte where he will meet with typhoon survivors and lead a mass at the Tacloban airport. (WATCH: What Yolanda survivors want to #ShowThePope)

On Sunday, January 18, the Pope will dialogue with leaders of other religions and the youth in the University of Santo Tomas then lead an open-air mass at the Quirino Grandstand in Luneta Park. (READ: Official itinerary of Pope Francis)

Millions are expected to attend the two public, open-air masses, a huge security nightmare for both Philippine forces and his team from the Vatican.

The Pope’s close-in security in the Philippines is a mix of Swiss Guards and members of the Presidential Security Group. Area and route security, meanwhile, is primarily the task of the PNP. – Rappler.com