Pope Francis: We need to become poor ourselves

Jan 16, 2015 12:25 PM PHT
Katerina Francisco
Facebook Twitter Copy URL
Copied
Pope Francis to fellow priests: 'Only by becoming poor ourselves, by stripping away our complacency will we be able to identify with least of our brothers and sisters' 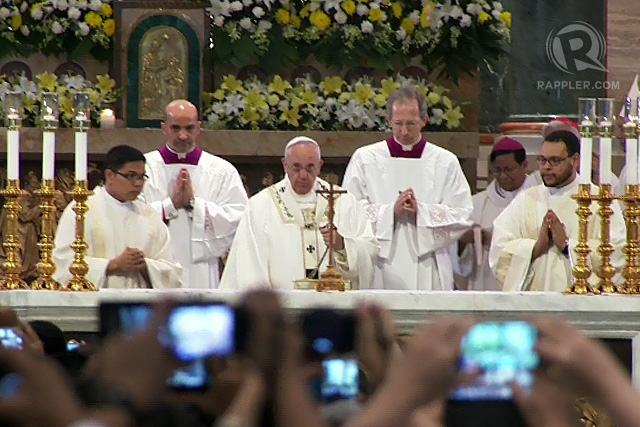 MANILA, Philippines – “Only by becoming poor ourselves, by stripping away our complacency will we be able to identify with the least of our brothers and sisters,” Pope Francis said in his first Mass in the Philippines at the Manila Cathedral, on Friday, January 16.

Speaking in English to about 2,000 priests, bishops, and religious individuals, the pontiff also called on the Philippine Catholic Church to play an active role in fighting inequality and injustice in society, echoing his speech in Malacañang earlier in the day.

“We will see things in a new light and thus respond with honesty and integrity to the challenge of proclaiming the radicalism of the Gospel in a society which has grown comfortable with social exclusion, polarization and scandalous inequality,” he said.

He stressed that concern for the poor is at the center of the Gospel. “If we take away the poor from the Gospel, we can’t understand the whole message of the Gospel,” he said.

Francis then called on the Church leaders to reject “worldly perspectives” and “see things in the light of Christ.”

Watch his homily below.

Pope Francis urged Filipino priests to “live a life reflective of Christ” by heeding their vows of poverty.

“It means living lives that reflect the poverty of Christ whose entire life was focused on doing the will of the Father and serving others,” he said in his homily.

Francis added that the priests, called to be ambassadors of Christ, should engage in a “ministry of reconciliation.” He said, “We proclaim the good news of love, mercy and compassion.”

The pontiff also said that the Church in the Philippines is called to “build bridges” and “prepare a fresh path for the gospel in Asia in the dawn of a new age.”

The Mass was the Pope’s second major activity in his 5-day visit to the Philippines, part of his tour of Asia that earlier brought him to Sri Lanka.

Later in the day the 78-year-old Pope will meet thousands of devotees for a more relaxed prayer service at the Mall of Asia Arena. – With KD Suarez/Rappler.com