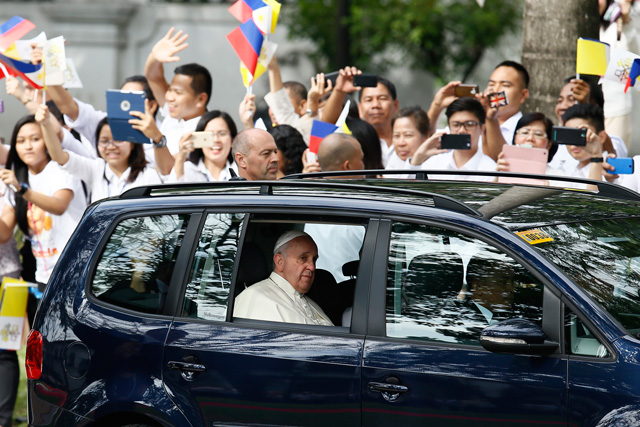 MANILA, Philippines – (UPDATED) Telecommunication companies in the Philippines temporarily shut down their services in Metro Manila to foil any attempt that would compromise the safety of Pope Francis.

The request came from government, according to separate advisories issued by telecommunication giantsGlobe Telecom Inc. and Philippine Long Distance and Telephone Company (PLDT).

“This was done in the interest of public safety during the ongoing visit of His Holiness Pope Francis,” PLDT Ramon Isberto said in a statement Friday, January 16.

Disruptions to continue until Jan. 19

Through the National Telecommunications Commission (NTC), the government requested mobile network operators to disable their services in areas where the Pope has events.

“When he returns to the (Apostolic) Nunciature (Friday, January 16), network service will be restored. (But) the signal will be disrupted anew when he heads to MOA (SM Mall of Asia),” Roxas told reporters on Friday.

The Pope will be meeting Filipino families at the SM Mall of Asia Arena at 5:30 pm on Friday.

On Saturday, Jan. 17, he will depart for Tacloban City from the Villamor Airbase.

“We’re making sure that we don’t give a chance (those who have plans of triggering explosive devices),” said Roxas.

Mobile phones are used as bomb detonators, as reported in previous bomb incidents.

In a text message on Jan. 16, Globe Telecom spokesperson Ma. Yolanda Crisanto said the company made proactive preparations for the papal visit because Globe wanted its customers to enjoy their experience.

“However, we also need to comply with the directives of the government considering the safety and security of the Holy Father and the public at large,” Crisanto added.

Earlier, Globe confirmed the disruption and said its subscribers will continue to experience loss of mobile signal and Internet connection especially in areas near Pope Francis’ route.

“This was done with the directive of the NTC. We hope for your understanding,” said Globe in its SMS advisory to its subscribers Jan. 15.

Since Thursday, Jan.15, netizens have been tweeting about signal outages of Globe and PLDT networks in the cities of Manila, Pasay, and Parañaque. (READ: Papal visit: Netizens react to disrupted telco services)

Mobile phone subscribers far from the Pope’s events might be affected by the disruption. “The telecommunication companies are helping [to ensure] that no creepover will happen,” Roxas added in Filipino.

Should signals and data coverage fail, an alternative form of communication is FireChat, a wireless mesh networking app which partnered with Rappler for the papal visit. Through the app, users can chat with each other using their wifi or bluetooth connection without the need for cell signals or the Internet.

(Read instructions on how to use FireChat and join the Pope Francis in the Philippines chat room.)

The more FireChat users there are in a given area, like the sites for the papal events, the greater the capability to transmit messages in an off-grid network. – Rappler.com